In my latest book review I mentioned venturing out of the country, and four days ago I returned home from... South Korea!

Before anyone asks, no I did not go there for the Pyeongchang 2018 Winer Olympics. I was in the Seoul area most of the time (too far). It's winter (too cold). And I don't particularly care about sports (self-explanatory). It was nice to be in Seoul and witness some of the Olympics-related hype, and I got to see a lot of Olympic athletes from the US and elsewhere in Incheon airport and on my flight home. But other than that, the games were far from my mind.

The main reason I was in South Korea was to visit a friend. Some months ago I had this plan to take a leave of absence from life and travel internationally for six months in 2018. That plan was a bust, but in the process of planning that trip a friend of mine from high school invited me to join her in visiting our mutual high school friend who works as a teacher in Suwon, South Korea. Korea was a place I thought I'd like to go eventually in my lifetime, but before being invited I hadn't imagined that I'd be going there in 2018. I was basically a warmly-welcomed third wheel, traveling with people I was already on good terms with, and I wouldn't have to pay for a hotel. So come February 15th, I was gone!

For my friend Sharon and I who were coming from Michigan to visit Ande, our initial plan was for us to take the same flight to Korea so that all three of us could be there together from February 16th to the 26th. But Sharon got a really cool opportunity to work in India for three months beforehand, and due to some logistical mumbo-jumbo she'd actually be returning to Michigan briefly and then arriving in Korea on the 20th. So for the first half of the trip it would be just Ande and I, and I traveled from Detroit to Seattle to Incheon on my own. 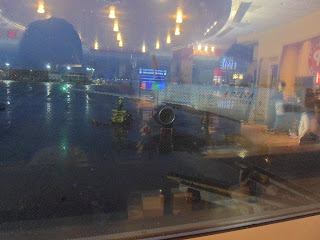 On Thursday morning I awoke at 4am to make my 8 o'clock flight, and Ma was gracious enough to drive me to DTW. After five hours in the air my flight landed on time in Seattle and I had about an hour to  transfer to my next flight, but then I lost about 20 minutes because my plane was in line behind other planes each waiting to park at a gate. And then, just my luck, the one big arrival/departure board that was within my vicinity was completely blank, so I had to figure out where to go on my own (the gate for my flight out of Seattle wasn't printed on the boarding pass that I received in Detroit). 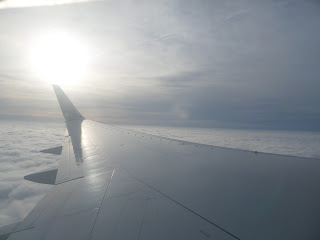 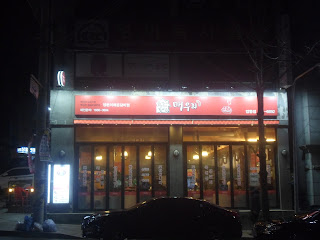 Thanks to Google somehow knowing my flight information, I got a notification on my phone telling me where my gate was. The exact gate that Google gave me turned out to be incorrect, but thankfully it was still in the right area. So I took the terminal train there, went up some escalators, and as soon as I stepped foot on the floor I heard "last call" for my flight!

But because of either my panicked state or the acoustics there, I couldn't tell exactly where the announcement was coming from, so I started to run frantically until some nice Delta flight attendants at an adjacent gate pointed me toward my gate for Incheon. And the flight attendants at my gate were very kind and didn't make a stink about me arriving so late, and they let me through. So Seattle had me messed up, and I almost missed my flight to Korea, BUT GOD! I made it. Lost my earmuffs somewhere in the process, but I made it.

Twelve hours later (Friday evening, local time) I arrived at Incheon! Ande met me at arrivals and then we took a bus to Suwon, and then a taxi to her neighborhood, and then it was a short walk to her apartment. After dropping off my suitcase, receiving a tour of Ande's place, and chatting for a bit, we went back out into the cold to find someplace to eat in her neighborhood. I picked a restaurant that caught my eye (it had a big red sign with a white house painted on it) and so my first meal in Korea was galbi-jjim, which is a spicy stew that has braised short ribs and other goodies in it. 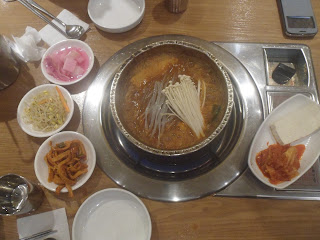 We stopped at a local grocery to get some snacks (honey butter chips, Jeju hanrabong oranges, and ginger & balloon flower tea for me), before calling it a night. Ande offered to let me have her bed but I was so enamored with her heated floor (apartments in Korea have heated floors, y'all!) that I just rolled out a couple of her blankets and a pillow and slept on the floor that night and all the other nights of my stay. 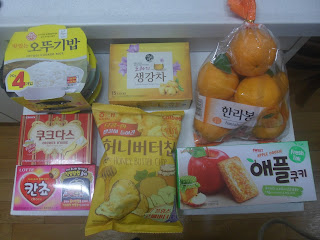 The next day (Saturday) was my first time experiencing Korea in the daylight, and rather than rushing off to Seoul, Ande showed me around Suwon! More on that tomorrow. I managed to take a lot of photos and keep notes every day while I was in Korea, so I'll be writing one post a day until I'm finished recounting my trip. Hope you enjoy!

In the meantime, photos can be found here: