As I mentioned, we didn't have much planned for our first of numerous sojourns into Seoul. There was one place from our lengthy Google doc "list" that I wanted to visit, but everything else we just decided on as we went. 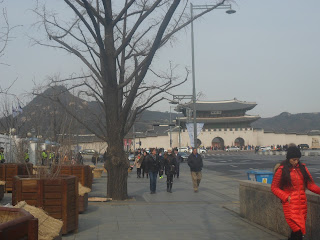 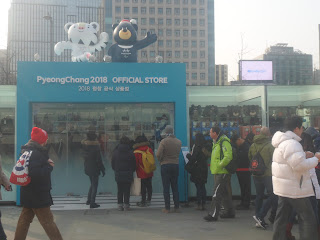 I was a tad hungry by the time we got there, so  we took a stroll down Sejong-ro, which is the major street that leads south straight from Gyeongbokgung. Ande told me that a lot of protests are held on this street, and true enough a few demonstrators had booths pitched along the sidewalk. But Sejong-ro was full of other activity this day, including a traditional Korean drum ensemble and various Olympics-related activities adding to the usual flow of auto and foot traffic. 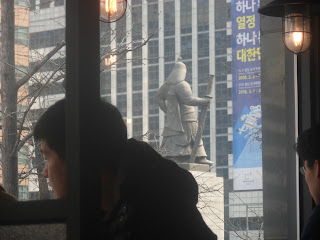 Sejong-ro is also where you can find statues of Sejong the Great (Korean king who's credited with the creation of hangul, the Korean alphabet) and Admiral Yi Sun-shin (navy commander who's renowned for winning battles against the Japanese navy in the late 1500s). Along Sejong-ro you can also find the US embassy and Sejong Center for the Performing Arts. We spent some time munching, chatting, and taking in the view from the second floor of an Angel-in-us Coffee before heading back to the palace. 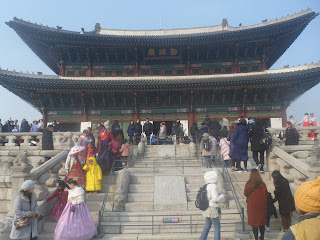 Imagine you're royalty, and centuries after your death, millions of common people get to traipse around your sprawling home every year, for decades to come. That's Gyeongbokgung. I wasn't as impressed by it as I was by the overall experience at Hwaseong Fortress, and Ande even admitted that it's probably better to go in the summer when fewer areas of the palace are closed and more events/performances are going on. Nonetheless, it is quite beautiful, and I thoroughly enjoyed seeing young men and women walking around the buildings and living quarters dressed in hanbok (Korean traditional clothing). The flowy, high-waisted skirts and vibrant colors invite both awe and respect. 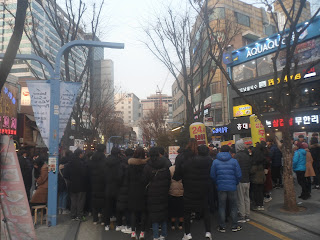 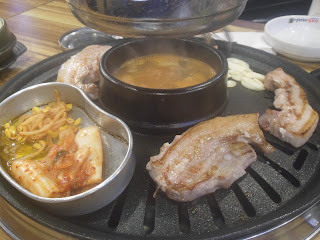 From Gyeongbokgung we took the metro to Hongdae to find somewhere to eat. No particular reason for coming here as opposed to elsewhere, other than that I heard that it's a university area where college students and other young'uns often gather to hang out and crowd around buskers. I guess I was just curious to see what the busking musicians were up to.

When we were there it was mostly dancers who were attracting attention, and not so many singers were out yet. The main popular street we went down was packed even before sundown, so you had to squeeze through to get anywhere. And being around so many youthful, stylish and energetic people reminded me of how young I no longer am. But for me it was satisfying enough just to have seen a bit of Hongdae for myself. After being turned away at one restaurant (perks of being foreigners), we ate samgyeopsal (Korean BBQ with pork belly) at Ungteori before heading back to Suwon. 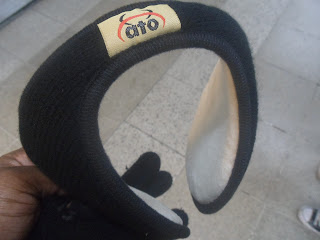 Most often we would take the metro back to Sadang station and then catch the bus from there. This night at Sadang happened to be my lucky night, since as we were headed toward the exit where the bus stops were, I spotted a rack of earmuffs out of the corner of my eye. I finally found a new pair of earmuffs that I liked enough to replace the ones I lost in Seattle! And I'll have you know, they're sitting on the table next to me as I write this, so my habit of losing things hasn't reared its ugly head just yet.

So that's Sunday for you. Monday would turn out to be full of street art, city views, and even more walking and climbing than before. More on that tomorrow!