Saturday was our last chance to walk around and see what we could see in Busan before boarding the KTX in the evening. And I can't say that we were disappointed! 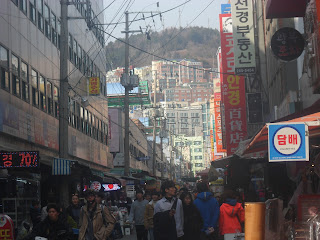 Previously when I was pouring through "things to do in Busan" articles and YouTube videos, I happened upon a website that mentioned Bosu-dong Book Street. Apparently, after World War II people started congregating there to buy and sell books that Japanese colonizers had left behind. Then during the Korean War when Busan was the temporary capital of South Korea, even more people gathered in this area to sell books to survive, and a cluster of bookstores fill that street now.  Of course, being the avid reader that I am, I had to visit this place. Even if I wasn't likely to find anything that I could actually read, I just had to see what the area looked like. So that was our first stop on Saturday. 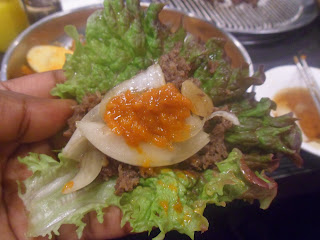 Well actually, first we checked out of our Airbnb and ate marinated grilled beef or bulgogi (plus naengmyeon, or cold noodles, for me) in Haeundae. Then we took the metro to Busan Station to rent lockers and stow our backpacks away for the day. And then we hopped back on to get to the Jung-gu area, which also holds numerous popular Busan attractions including the Book Street. 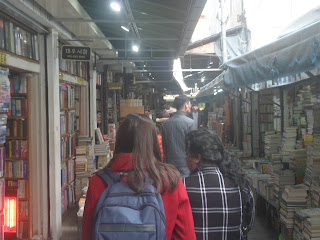 And I was right, all the books I saw were in Korean with the exception of a few French children's books and a couple English-language story anthologies and magazines that I wasn't interested in. The Book Street isn't that long but it's so densely packed with books that no matter if you're just passing by the outdoor displays or if you actually try to navigate the inside of someone's bookstore, it's going to be a tight squeeze. But for me, being around all those books gave me the same feeling of calm and contentment that being at Haeundae Beach gave me. It was enough just to have experienced the place for myself. 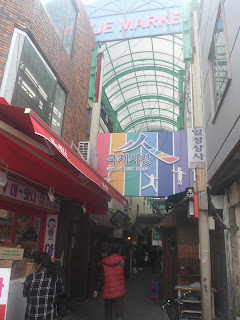 From the Book Street it was a short walk to Gukje Market, which we either happened upon by accident or was somewhere that Sharon wanted to visit. I can't remember. But anyway, it's a massive traditional covered market with innumerable stalls selling anything that you can think of. We stopped in one souvenir shop and then in a dog clothing shop so that Ande could look for something cute for her pup named Hodu to wear, but other than that we just walked around browsing for a while. It's easy to get lost there and we didn't have an extremely strong sense of direction, so we each took turns deciding which way to go until we ended up on Arirang Street, and then somehow maneuvered our way to BIFF Square, which wasthe next place that I wanted to visit. 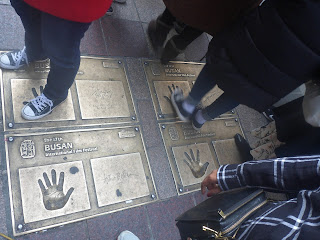 BIFF Square used to be where the Busan International Film Festival (or BIFF, get it?) was held, but now it's a popular shopping area that's full of food stalls as well as more mainstream stores like ARTBOX. Remnants of the square's former purpose remain, as the main walkway is dotted with plaques that contain the handprints and signatures of various actors and directors who attended the festival in the past. We spent some time surveying the odds and ends in ARTBOX before stopping at one stall so Sharon could get a lamb kebab, and then another stall so that I could eat hotteok again. 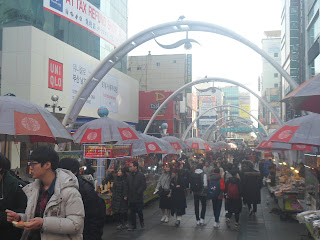 Since I don't know Korean, I'd become accustomed to not understanding anything when I'd hear people talking around me. But in Gukje Market and in BIFF Square, I could suddenly read most of the signs and understand more of what I heard.... because it was in Japanese! Busan is only a ferry ride away from Fukuoka, Japan, and so apparently quite a few Korean business owners in Jung-gu will have signs written Japanese (or even speak Japanese themselves) in order to accommodate the significant flow of Japanese people who go to Busan for vacation and/or shopping purposes. You learn something new everyday! 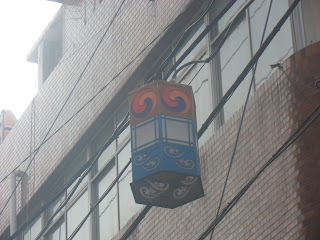 By then we were running low on time, so we walked through the rest of BIFF Square and stopped for cold beverages at a CU before entering a metro station that was right across the street from Jagalchi Fish Market. This market also appeared in  Black Panther and we'd considering visiting it, but in the end we only got a passing glance of it from afar. 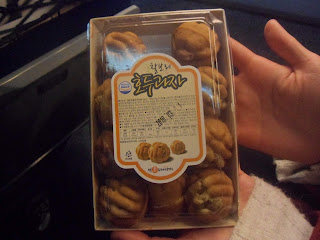 Once we arrived at Busan Station, we retrieved our backpacks and then walked outside to get from the metro part of the station to the train part to catch our KTX back to Suwon. We killed some time drinking tea and resting our feet at Bizeun, which has THE BEST GINGER TEA I've ever had in my life! Then it was a smooth evening ride back to Suwon, during which Ande brough out a box of hodu-gwaja that she'd secretly bought to share with us. Hodu-gwaja are small round pastries that are baked in the shape of walnuts and stuffed with red bean paste. "Hodu" means "walnut" in Korean, and Ande and her boo named their dog Hodu because he's walnut-colored. Ande was going to spend the night with her boo and his parents again, so once we arrived to Suwon we stopped to get chicken sandwiches from Mom's Touch and ate together in her apartment before she left Sharon and I for the night.

Sunday was our last full day in Korea, and our last chance to visit Seoul. We ended up being short on time that day, but we still managed to cross one huge must-do off of our list. More on that tomorrow!