On Thursday we left Suwon for a weekend excursion to Busan! Again, no concrete plan in mind, just another place to explore. 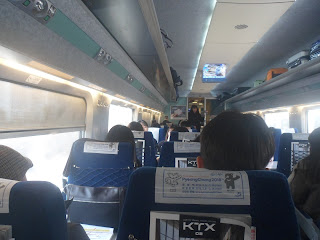 In the months leading up to this trip, we'd passively mentioned visiting Busan since it's right on the ocean and is South Korea's second-largest city after Seoul. But it wasn't until a month or two before I left that I said to the girls, "Okay, I think we could actually do this. Do y'all want to or not?". We were all open to it, so Ande bought the KTX (high-speed train) tickets and booked an Airbnb that we all liked and just had us reimburse her later. Cut to Thursday morning, we each threw a few belongings in our backpacks and took the bus to Suwon Station. 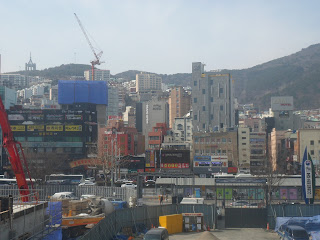 We'd opted for the KTX as opposed to flying or taking a slower train because ideally we could see the Korean countryside while still making it to Busan in about three hours. But the seats are made in such a way that you naturally lay back slightly, and the ride is so smooth that I was lulled to sleep despite myself. So I saw a little bit of the countryside at the beginning and in between naps, but didn't actually see that much in the end. Same goes for the ride back to Suwon a couple days later. 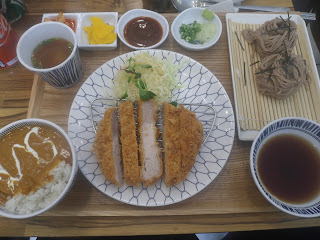 We arrived at the train part of Busan Station and then had to leave that building and walk a couple minutes to the subway part of the station in order to take the metro eastward to Haeundae, where our Airbnb was. Haundae is one of the more popular areas in Busan due to Haeundae Beach, which is the most well-known of the city's multiple beaches. We had some time to kill before we could check into our Airbnb, so we stopped at a Japanese restaurant where we each got a set that gave us a little bit of everything: curry rice, tonkatsu, zaru soba, miso soup, plus kimchi and radish, because we were still in Korea after all. We'd originally though to go to a Hong Kong-style Chinese restaurant, but they were closed until dinner time and this Japanese restaurant was just a few doors down from it so there we went. 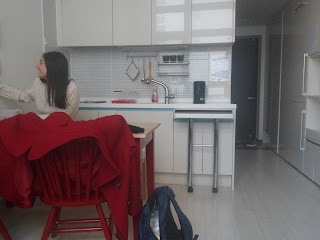 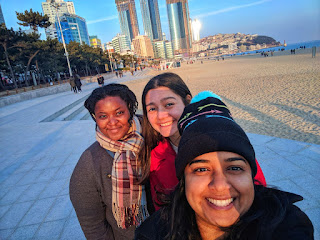 From there we followed Ande as she located our Airbnb, which was in an apartment building across the street from a hospital and surrounded by a bunch of hotels. We didn't have a view of the ocean (just a lot of tall buildings and a glimpse of the mountains in the distance), but we were still really close to Haeundae Beach! Our Airbnb was modest but clean, just the right amount of space for three people, had floor-to-ceiling windows and a loft with two beds (Ande's and Sharon's), a really nice bathroom, and an open sitting area with a couch/futon (my bed).

The only downside was that there was no silverware. We didn't plan on cooking, but I'd gotten used to drinking ginger tea every morning by this point, so not having spoons was slightly annoying but no big deal. Considering we'd only be using the place for sleeping and showering, and neither I nor Sharon had used an Airbnb before, the place was perfect as far as I was concerned. Shoutout to Sangmee. 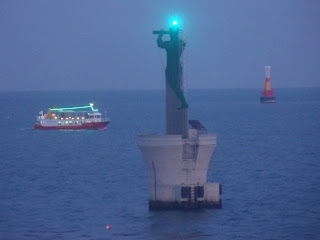 After inspecting the place and resting for a bit, we went to Haeundae Beach with just enough time to explore as the sun was setting. All we really did was walk on the sand (with our shoes on), take pictures of the beach and each other, stare out at the water, and do some people-watching, but I had such a great time! Seeing the ocean reminded me of how much I love being in and near bodies of water, even though I don't give myself opportunities to swim very often. Water gives me a great feeling of contentment and peace, so the cold and the sand in my shoes hardly bothered me at all. 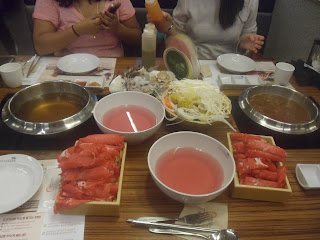 Friday would be our first and only full day in Busan and by the end of it I'd meet the king of Wakanda! More on that tomorrow!