I just finished the longest book I've read in a while yesterday (more about that on another day), and I have three other finished reads waiting for me to review them, so I feel like I'm on a roll right now! Today I'm writing about two of those reads that I've kept waiting, and both of them focus heavily on love. Coincidentally, I also bought each of them in Louisville during the 2019 holiday season. The first is a romance novel written by a Black woman (yes, for the first time ever on this blog I am reviewing a romance novel!). The second is the incredibly detailed autobiography of an actress who starred in one of my favorite TV shows ever.

The Wedding Party  by Jasmine Guillory 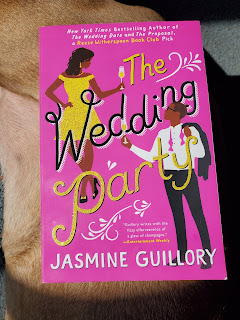 Perhaps it's just the magic of the promotional cycle, but last year Jasmine Guillory's name kept popping up in my usual Internet haunts, even though I hadn't previously known she existed and also had no interest in reading romance novels at that point. (Romance fell into the same bucket as YA in that they're both genres that little Danielle, always-reads-beyond-her-grade-level-and-is-too-sophisticated-of-a-reader-to-indulge-in-fluff Danielle, decided were beneath her. I'm yet mending my snobbish ways, I promise!) The Nod, a podcast I was regularly listening to, re-released/re-visited a previous episode featuring Guillory that I'd somehow missed the first time around. I sometimes lurk on Roxane Gay's Twitter account, and she too sang Guillory's praises last year, going so far as to re-post her glowing 5-star Goodreads review for The Wedding Date (Guillory's first novel in her series of the same name). So last Black Friday in Louisville when Ma and I were looking for baby shower gifts for my cousin at Target, and I wandered over to the books section to find The Wedding Party, I figured this was my time to try something new. Ma raised an eyebrow at me like, "You sure?" when she saw the book I'd chosen, because even she knows that romance isn't usually my thing. But this time it was, and I'm so glad that I took a chance on this book!

Not gonna lie, I specifically chose The Wedding Party (book #3 in the series) because both of the featured lovers are Black. At the time of this writing, all but one of Guillory's other books feature Black women in interracial relationships, which is more than fine. But if I was going to give her work a try, then for me it was important to read a romance story about two Black people. Plus, the "these two people hate each other but also can't resist each other" concept seemed to be the most interesting and entertaining out of the available options. Main characters Maddie Forest and Theo Stephens are extremely close friends of Alexa, the protagonist of The Wedding Date who's now preparing to marry her boo. They absolutely love Alexa, but they can't stand each other. Maddie, a stylist on the rise, thinks Theo is boring and pretentious. Theo, the communications director for the mayor of Berkeley, thinks Maddie is shallow and only cares about outward appearances. Helping with wedding planning has them seeing each other more frequently, and eventually they start having sex on a regular basis. And they make an agreement: this is just sex, it'll last only until Alexa's wedding, and Alexa must never know lest things get awkward or Alexa tries to pressure them into dating each other for real. As you might guess, Alexa's interference isn't needed, because Maddie and Theo start falling for each other despite themselves and the "rules" they created for their situationship.

On screen and in books, popular/mainstream romance stories tend to follow a similar formula or set of formulas. And so to an extent, The Wedding Party is somewhat predictable. Of course Maddie and Theo are in a committed relationship by the end of the novel; that's just how it goes, and that's what we expect. But April Wolfe, a former co-host of a film review podcast I enjoy called Maximum Film! (formerly Who Shot Ya?) said something about storytelling that sticks with me to this day: It's not always about what happens, but how it happens. In other words, even if the ending of a story is common or predictable, what matters most is how we get there. And I think Guillory does a remarkable job of building onto each interaction that Maddie and Theo have, cultivating their attraction and involvement with each other gradually. I also appreciate how she uses the couple to demonstrate how misplaced and just plain way-off our assumptions about others can be, especially within the context of these two Black professionals who've become adept at hiding their childhood struggles. Aside from the exhilarating sex that Maddie and Theo have (Jasmine Guillory is also very good at writing sex scenes, in case you were wondering), their growing ability to be vulnerable with each other and give each other grace is the true mark of their progress.

If you enjoy "enemy turned lover" or "more alike than different" stories, dislike your best friend's other friends, have a secret talent, enjoy eating pizza A LOT, are fond of the Bay Area, are a career-driven person, are in the mood for a laugh, or you just want to read a romance novel that features mostly Black characters and is also written by a Black woman, then read this book!


"Don't think that I'm trying to be modest here—it sure as hell was my idea and it never would have happened without me—but I needed everyone here and more to make it happen" (37).

"She'd told him so much. About her struggles, about her goals for herself, about why she was the person she was. Had he ever listened to her? Or had he just been waiting for his turn to talk?" (281).

"I always thought I had to be perfect, I could never make a misstep, or everything would come crashing down, but I guess I was wrong about that? I could have been fucking up for years!" (303).


My First Five Husbands... And the Ones Who Got Away  by Rue McClanahan 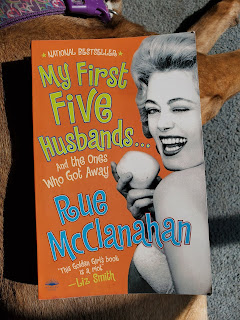 'The Golden Girls' is one of my favorite shows of all time. Before I write anything else about this book, you have to know that about me. I. LOVE. THE GOLDEN GIRLS. Of the four main characters, I wouldn't say that Blanche (played by Rue McClanahan) is my favorite, but any true GG fan knows that she's an essential part of the cast. So the day after last Christmas when I was combing my way through the aisles of a Book Warehouse near Louisville, and I spotted an orange book cover with a name and face that looked familiar, I couldn't help but gasp! Gasp, clutch the book to my chest, and then carry it tightly in the crook of my arm until I'd finished making all of my selections. No one, and I mean no one, was taking this copy of Rue McClanahan's memoir from me.

In all honesty, I assumed that this book would be fluff. So many celebrities put out books, and often they're just... you know what I mean? And that didn't matter to me! I was in the mood for a fun read, I was delighted to have found out that Rue McClanahan wrote a memoir, and I love reading memoirs anyway, so I was willing to accept this book for whatever it turned out to be. Bring on the fluff, I was ready for it! But I was truly impressed by My First Five Husbands. Not only is it well-written—Rue sure knows how to tell a story, and she has so many of them—but Rue manages to weave her life story, her career trajectory, and her romantic history together seamlessly. And the title of the book is not bait. Over the span of her adult life, Rue McClanahan did indeed get married to five different men (and then married a sixth), was proposed to at least seven times, and had various boyfriends and casual flings in between (including Robert Guillaume!). Born as Eddi-Rue in Oklahoma in 1934, Rue had anxiety and a fear of abandonment that went unaddressed until she was grown. As an actor and dancer who could sing a little too, she pursued her career largely in New York and LA artist circles where sexual norms were more relaxed. And frankly, she enjoyed men's company and sex was fun for her (you better believe she rates each of the men she mentions having sex with in this book). All of this led to Rue making some impulsive and sometimes desperate decisions, and clinging to mostly terrible men. Only two of the five husbands she discusses aren't completely terrible, and it's implied that she finally got it right with her sixth and last husband.

Of course Rue makes sufficient mention of 'The Golden Girls' too, but she's understandably discreet about whatever drama might have happened behind the scenes. She also emphasizes that while she and her character Blanche have a few things in common, most people don't know Rue like they think they do. And I can only imagine the research and strength of memory that must have gone into this book, to be able to mention so many people by name the way she does, the whole way through! Like Anna Deavere Smith does in Letters to a Young Artist, Rue doesn't merely name-drop for the sake of name-dropping. Performers, especially working actors, meet all kinds of people as part of the job, and all the people that Rue met influenced her life and her decisions in some way. Furthermore, she's honest about her failures and setbacks, she's real about the struggle to have longevity as an actress (especially for moms), and she's serious about her art and the people she loves. You can tell from this memoir that she just... she's gone through so much, and she cares so much! She actually gives a crap! My First Five Husbands was published in 2007, and Rue passed away in 2010. And when I finished this book, my immediate first thought was, What a vibrant and vulnerable gift. What a gift Rue McClanahan was, and what a gift she's given us through her memoir.


"Promise me that if you take one thing away from this little journey of mine, it will be to henceforth and forevermore always summon the wit to say, 'Let me think it over.' Repeat after me: Let me think it over. If only those words had come out of my mouth!" (35).

"Meanwhile, this Little Miss Nobody was clawing her way up a very roughly graveled mountain, with hundreds—no, thousands—of other Little Miss Nobodies right beside her. And some of them had good connections! Dear reader, it was monumentally difficult. And for any aspiring actress who may be reading this, best she should know what it can really be like. Murderous!... but for me it simply wasn't an alternative. This was do or die. I had the talent, I had the drive, and I knew it was only a matter of time and luck. Unless Life intended to play some monstrous joke on me, that is" (140-141).

"I struggled to assimilate the information he was giving me, grateful to know that a deeply concerned but comfortingly practical Morrow was waiting for me in the reception area. The person you need with you at an event like this is a producer, not a director. Someone who will take action instead of telling you how to feel" (330).