Okay, so I missed April. I've been consistent with writing my monthly book reviews so far this year, so I figure I'm within my rights to miss a month. Actually, I did have one book finished in time to write about on its own for April (and there would've been plenty to write about, since it's another stunning novel from Tayari Jones). But then I thought I had enough time before April's end to squeeze in finishing a much shorter book, and do a two-fer review like I usually do... and I was hilariously mistaken. Now it's the end of May. But hey, I'm still reading, I'm still writing, I'm back on this blog to do a new review, and that's what matters most! Both written by Black women, this month's selections  are a novel about secret second families that was on my 2020 Christmas list (thanks Ma!), and a collection of short stories about Black middle class concerns that's the third of the first three new books I bought this year.
Silver Sparrow by Tayari Jones 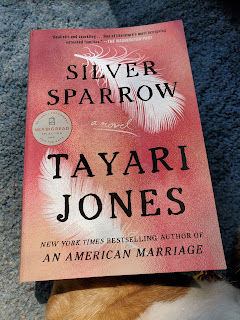 "On that day, my mother would be called upon to do the talking. She is gifted with language and is able to layer difficult details in such a way that the result is smooth as water. She is a magician who can make the whole world feel like a dizzy illusion. The truth is a coin she pulls from behind your ear" (5).
"I had no argument, no reasonable cover story, but I wanted her to stand up for me anyway. Isn't love when you defend someone when you know she's wrong? I didn't want her to stand up for what was right, I wanted my mother to stand up for me" (104).
"You can't put the rain back in the sky" (319).

Heads of the Colored People by Nafissa Thompson-Spires 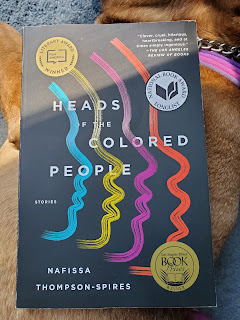 In twelve stories spanning from the 1990s to the present, Heads of the Colored People presents an array of Black middle class perspectives via characters ranging from cosplayers to writers, visual artists, yogis, professors, childhood nemeses, teenagers learning to be Black, former-hippies-turned-wellness-industry-hostages, influencers, disabled grad students, church ladies with anger issues, and funeral singers. Most of the stories take place in Southern California, thematically related but not all directly linked. Even though the characters come from the same region, they aren't so obviously interconnected as the characters are in, say, Sour Heart or Girl, Woman, Other. Some are brought up in two consecutive stories, only to never to be mentioned again.
The most reoccurring character is a woman named Fatima (loosely based on the author herself, perhaps? Fa-ti-ma, Na-fi-ssa... it's possible). Fatima is mentioned as a 5th grader during an argument her mom is having with another mom ("Belles Lettres"), and appears or is mentioned at different ages in four other stories. There's "The Necessary Changes Have Been Made", where she's mentioned as a former acquaintance or lover of a male professor who hates female authority. There's "The Body's Defenses Against Itself", where Fatima reflects on her body issues in yoga class while being unsettled by the presence of a woman who reminds her of her childhood frenemy. There's "Fatima, the Biloquist: A Transformation Story" which recalls teenage Fatima making a new friend who teaches her how to be Black, while at the same time dating a white boy whom she doesn't want her Black friend to know about. And then there's "Suicide, Watch", where a social media-obsessed college student recalls knowing Fatima back when Fatima suffered from bulimia in high school.
Something about the cover and the title made me assume that this story collection would be solemn. And sure, just like Nana Kwame Adjei-Brenyah's Friday Black, Heads of the Colored People opens with a story about Black people being murdered in public due to racist assumptions about their innate dangerousness. But also just like Friday Black, as serious as HOTCP can get at certain points, it's also genuinely funny in an "I'm not sure if I should even be laughing at this but I can't help it" sort of way. For instance, the brilliantly-conceived "Belles Lettres" features two Black women academics throwing down via written letters à la private school PTO moms who hate each other and whose daughters don't get along at school, but also both of these PTO moms have doctorates and fight like academics would. That story and the petty battle of wills that takes place between professors who can't agree on the lighting in their shared office ("The Necessary Changes Have Been Made") convinced me that Nafissa Thompson-Spires must be an academic before I confirmed that she actually is a professor in real life. There's a certain way of writing about jobs that people can only pull off when they have intimate knowledge of said jobs, and it shows. It's unmistakable. It's just like how I, as someone who worked retail in the past, immediately knew that Nana Kwame Adjei-Brenyah had also worked retail by the way he satirized Black Friday shopping in Friday Black.
By the way, I know I keep bringing up Friday Black, and it's not because direct comparisons could or even should be made between the two books. It's just that I only read story collections every now and then, and as another socially-conscious collection that has sly wit and focuses on Black people, Friday Black kept coming to mind the more I read HOTCP. They remind me of each other. Speaking of which, one last connection I'll make between the two (in this review, at least) is that they both end on tragic yet hesitantly hopeful notes. In particular, HOTCP closes with a story about a funeral singer/hospital employee/single mom who despairs of how powerless she feels to prevent suffering and loss, but then resolves to keep living for now ("Wash Clean The Bones").
Seriously though, what a fun read this was! I felt so smart catching certain cultural or literary references that Nafissa-Spires throws in, like using "Smaller Thomas" as an intentional mess-up of the main character's name in Richard Wright's Native Son. Or mentioning how Baratunde Thurston's writing might have helped Fatima learn how to be Black, when his book is literally titled How To Be Black. Or including Drake's character in 'Degrassi' as the kind of fit disabled man that a fetishist sculptor wishes she could have ("My own personal Jimmy Brooks"). Or referring to "the new whiny style" of today's rap music, which... I think is a playful shot at Young Thug? Additionally, thanks to the skillful name-dropping that Thompson-Spires employs, I also got to learn about noteworthy Black figures that I hadn't known existed! Figures such as a contemporary poet Donita Kelly, track and field Olympian Wilma Rudolph, and Harlem Renaissance poet Countee Cullen. If you're interested in satire, award-winning story collections, reading about Black people just living, chuckling and reflecting at the same time, or media literacy that encompasses anything from 1850s "picture gallery" archives to ASMR videos, then read this book!
Favorite quotes:

"You're afraid of the light... You think you're too good for this school. It's obvious to me. You don't want to be exposed, so you overcorrect in some places, but it all comes out somewhere else... Sometimes the problem is the environment; sometimes you are the environment. In your case, you think you're making changes, but you take the problem with you" (31).
"But what then? She wanted to think of college as an opportunity for new freedoms, self-expression, rebellion... But what if college was only thirteenth grade, an escalation of everything in her life now, with older, more taxing versions of the same people, where she'd exchange Carmen and Kevin for new avatars—a controlling sorority sister or an inappropriate professor?" (132-33).
"In addition to Jessica, more than a few former friends had called her volatile. She was tired of that word. She was not a beaker full of combustible chemicals or a volcano looking for an opportunity to expel pent-up heat, leaving ash and damage in her wake. She was a person, just as much as they were, perhaps more complicated, but certainly normal, just as normal as they were" (141).