BOOKS! (The Absolutely True Diary of a Part-Time Indian)

Another borrowed book! This is the other one that my friend let me temporarily swipe from her bookshelf, in addition to The Secrets of Mariko. I hadn't realized that this semi-autobiographical, National Book Award-winning novel was YA literature until I started reading it, which gave me pause at first. (I'm sure I've explained this before, but my reading level had always been advanced when I was a kid, and during my preteen years I decided that YA material was beneath me. I know, what a little elitist I was! Anyway, these days I don't have anything against it, but none of it has piqued my interest since then.) But I was so absorbed and impressed by this one that I opted to keep my friend's copy with all of my little notes in it and order a fresh one to return to her instead. Thanks again, Sharon! 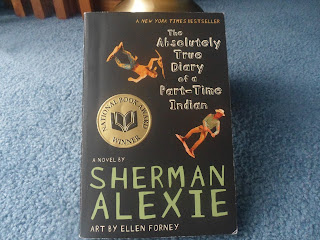 Known by his tribal members on "the rez" as Junior and by his white teachers and classmates as "Arnold" or "Arnie", Arnold Spirit Jr. is a 14-year-old boy who has lived his whole life on the Spokane Indian reservation in Wellpinit, Washington. (Note: I usually prefer to use the adjectives "Native", "Native American", or "Indigenous", but Junior refers to himself almost exclusively as Indian, so that's what I'll go with for the purpose of this review). From what he's seen and been told, life is pretty hopeless for him. On a personal level, he was born with "water on the brain", which left him vision-impaired and prone to seizures. He also stutters, has a lisp, and as a teenager he hasn't grown into his body yet. All of the above make him an easy target among his peers. On a societal level, he is approaching adolescence in a community composed of generation upon generation of people who are born and die without ever leaving the reservation. Which would not be so concerning if Spokane Indians had more options at their disposal, and if, perhaps, people not only remembered that Indians still exist but also cared what happens to them.

So off the bat, things aren't looking up for Junior. Thankfully he's found an outlet in drawing and writing, and uses these skills to make sense of his world and create other ones. Initially he starts high school on the rez like all the other kids, but stern encouragement from a teacher wracked with white guilt inspires him to seek better opportunities at Rearden, one of the best schools in the area. Not because Reardan is better just by virtue of being white, mind you, but because he knows that this is his only way out, and his potential might be squandered if he doesn't test himself in an environment apart from the rez.

Predictably, things get worse before they get better and Junior fields harassment and ridicule from both sides. As far as nearly everyone except his immediate family is concerned, he's a traitor for leaving the rez. And being the only Indian person in his entire school makes him an uncool outcast.  He's never uncertain about being an Indian person, but how Indian is he supposed to be at school? How much ignorance should he put up with there? How much should he tell them about his real life? How can he convince folks back on the rez that he's still one of them and has never thought of himself as better than anybody? When we meet Junior, he is only at the beginning of a lifelong balancing act that's common to many people of color in white or Euro-centric societies. Hence the "Part-Time Indian" in the title. While folks at the rez can't resist giving him a hard time, eventually he's able to set necessary boundaries with his classmates at Reardan and manages to make a few new friends.

Junior is resilient, but he is still young and he's only human. He gives readers a visitor's pass into his deepest thoughts, many of which have him contemplating the habits and norms of his community, and questioning why Indians keep getting pain, suffering and death relentlessly dumped on them. Occasionally he's at such a loss that he even writes questions like "Where is hope and who has it?" and wonders if his people are cursed. One such perceived curse is the sensitive issue of alcoholism, and much respect is due Sherman Alexie for the way he addresses it. While he doesn't entertain the drunk Indian stereotype, he does acknowledge the ramifications of alcoholism in Indian communities as Junior experiences them both directly and indirectly. For example, during his freshman year Junior loses three loved ones, all victims of alcohol-related incidents, all dead within months of each other. At the same time many of his relatives and neighbors who are still living (including his father), witness such tragedies and continue to drink, seeming to ignore the correlation. And so he both blames people for their recklessness but also understands why they turn to booze in the first place, having to face harsh daily realities of psychological and material hopelessnes.

I want to emphasize that with all of its tragic moments, The Absolutely True Diary of a Part-Time Indian is actually a fantastic read.  I mean it's not all doom and gloom! There are powwows and basketball games, school dances and first love, a little bromance. There are dark jokes, silly jokes, existential "Who am I?" jokes, even some roasting. Alexie's voicing of Junior combined with Ellen Forney's illustrations harmoniously capture the kid's adolescent wisdom and self-deprecating humor, and Junior's matter-of-fact retelling (likely owing both to circumstance and personality) softens the blows of overwhelming confusion, humiliation, and disappointment in his young life. In a word, the novel is delightful, as contradictory as that may sound. If you're looking for an introduction to Native American literature that will be blunt without shredding your nerves and tearing your heart to pieces like The Round House will, read this. And then go read The Round House too!


"Seriously, I know my mother and father had their dreams when they were kids. They dreamed about being something other than poor, but they never got the chance to be anything because nobody paid attention to their dreams... It sucks to be poor, and it sucks to feel that you somehow deserve to be poor. You start believing that you're poor because you're stupid and ugly... because you're Indian. And because you're Indian you start believing you're destined to be poor. It's an ugly circle and there's nothing you can do about it" (11, 13).

"No matter what else happened between my tribe and me, I would always love them for giving me peace on the day of my grandmother's funeral. Even Rowdy stood far away. He would always be my best friend, no matter how much he hated me" (160).