Almost didn't buy this book because I thought it'd be boring (I need to stop doing this to myself!). So a black woman takes over the cane farm that her father bequeathed to her in Louisiana, and it's hard because she's working in a white man's industry in a white man's state in a white man's country in an increasingly whitewashed world. Okay, and? Such is life. But oh. My dear queen with a gift for description, Natalie Baszile, please forgive me for doubting you! The week before the TV adaptation 'Queen Sugar' premiered on OWN, I became determined to read the book first and foremost. Now that I've read it I'm not as interested in watching the show just yet (numerous creative deviations from the book being the main reason; I'll probably wait until the season is over and watch it all in one sitting). And since most people seem to be more familiar with the show anyway, I figure for now I'll focus on appreciating the source. 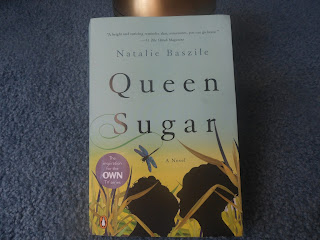 The Bordelon family is a Louisiana-based clan whose members yearn for forgiveness and second chances. Main character Charlotte "Charley" Bordelon, a widow and Los Angeles native, is drawn back to her family's hometown of Josephine following the death of her father and with her grandmother Miss Honey's prompting to come on home. She brings her preteen daughter Micah in tow, who was previously injured in an accident due to Charley's temporary grief-induced negligence. Rather than reconnecting with her roots, however, Charley's decision to move is primarily due to inheritance; her father Ernest bought the 800-acre sugar that he'd previously worked as a young boy, and left it to Charley in his will. She has the next ten months to produce crop, or else lose the land and face a mountain of debt.

Embarrassingly inexperienced, starting late in the game, shunned by some locals, and patronized and taunted by her white male competitors, Charley is nevertheless able to find a willing field manager and eventually amass a small staff of laborers to get her crop going. But farming is not only an art, it's a 24-hour job, and when she's not contending with scarce equipment, scarcer funds, rains, hurricanes, and bug infestations on the farm, she faces another host of large and small dramas at home. Micah is entering that age where she's increasingly insecure about herself and combative with Charley, and while Miss Honey and auntie Violet offer home and a sense of security, Miss Honey relentlessly insists that Charley let her estranged older half-brother Ralph Angel in on the farm work, if not also his share of the profits (never mind that their father left the farm solely to Charley, and she's the only one authorized to own or profit from it). Brother arrives from Arizona a while after sister arrives from California, and while they try to keep it civil at first, the tension between them will not be ignored.

Ralph Angel is the child of Ernest and his high school sweetheart, who never married. Ernest left for California in search of a better life, and while they tried their best to co-parent, Ralph Angel's mother bore most of the responsibility. Like his sister, Ralph Angel is also a single parent who recently lost his spouse, and he struggles with poverty and a drug addiction to make the best life he can for his his son, Blue. As the main character Charley carries the story well, but dare I say it, Ralph Angel is the more interesting of the two siblings. He is a truly tragic character who ultimately never finds peace. He actually believes that because of his past and who he is as a person, he is unworthy of grace (which is kind of how grace works anyway, a gift that's undeserved by the receiver, but I digress). Ralph Angel is a grown man with severe abandonment issues due to his father seemingly choosing his second family (especially Charley) over him, insecurity expressed through obtuse pride and a fiercely aggressive desire to be acknowledged, and an addiction to the same drugs that claimed his late wife's life. He yearns for a new start, he yearns for something to stick, he yearns for acceptance and understanding, he yearns for something to truly call his own. But every time he tries to make a positive change in his life or commit to something productive, he manages to ruin it nearly as soon as it starts.

Later in the novel I was also greatly impressed by Miss Honey, whose character is brilliantly written. You are almost deceived into pegging her for little more than that stubborn matriarch who loves hard and never lets anyone starve, that praying grandmother that every black family seems to have or remembers having. And she's all of those things. But she's also incredibly flawed, and so blinded by her own guilt for having caused Ralph Angel to grow up nearly fatherless, her denial, and her commitment to "family first" that she coddles Ralph Angel until he's past the point of no return. I'm not sure if Natalie Baszile planned it, but the way Miss Honey protects and makes excuses for Ralph Angel is reminiscent of the ways in which many black and brown cultures can make absurd exceptions for their boys and men, not only to a fault, but to nearly everyone else in the family's expense. And yet, as much as Baszile doesn't let up on how wrong Ralph Angel is, as the author she loves on him almost as hard as Miss Honey does. Baszile makes us want to like him and root for him, if he'd only let us. He is broken and desperate and impulsive and spiteful and afraid and tired and angry, but he's not beyond grace. Unfortunately that's a lesson that he never allows himself to learn.

As mentioned before, if nothing else, Natalie Baszile has an incredible gift for describing not only of sights, sounds and tastes, but also the sensations that they arouse. She makes you visualize stalks of sugar cane, smell the various stages of a southern Louisiana summer, feel Ralph's rush of panic when he feels pushed to the limit, become burdened with Charley's fatigue and desperation trying to make both her farm and family life a success. She even manages to make gardening sound provocative, with musings on flowers blooming and cane harvesting used as foreplay to one of Queen Sugar's few sex scenes. I usually skim past long descriptive passages, but with this novel that was not the case. If you enjoy underdog stories, delving into family drama and personal demons, or have even the slightest smidgen of interest in life and terrain in rural Louisiana, chose Queen Sugar. It will surprise you, bewilder you, pierce you like only kin can, and then welcome you home.


"Tears stung Charley's eyes as she bathed in the fading glow of Violet's voice. She could soak up Violet's warmth for a lifetime. She was the buttermilk pancakes to Violet's maple syrup, the white bread to Violet's bacon grease, and if she had a thousand more awful days like she'd had today, at least she had Violet to balance things out" (68).

"Please God, protect my family. Leave something behind on the farm so I'm not completely ruined. Let me have one chance to see what I can do before you take it all away" (252).