BOOKS! (The Secrets of Mariko)

This might be my first review of a book that I don't actually own. I'd found it while snooping through the bookshelves of my friend's closet during her housewarming party a few months ago, and before I could ask she told me I could borrow it. Thanks, Sharon!

The Secrets of Mariko: A Year in the Life of a Japanese Woman and Her Family  by Elisabeth Bumiller 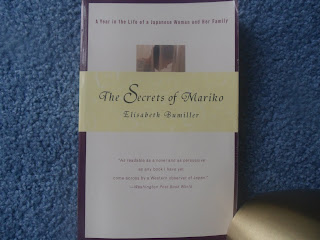 Tapping into what lies behind the image of the Japanese family is the main objective for Emily Bumiller in this biography. After living in Tokyo for a couple years due to her journalist husband's transfer there, and also having recognized how seldom she has had substantial and meaningful encounters with Japanese people in that time, the journalist and new mom seeks out a Japanese family to participate in this project. Through a series of connections she is introduced to Mariko, a "typical" Japanese housewife who, with the help of Bumiller's Japanese professional translator friend Sachiko, grants Bumiller astonishing access to her life for a year. From February 1991 through April 1992, Bumiller shadows Mariko, interviewing her, her immediate family, local school and community leaders, politicians, TV execs, entertainers, and even yakuza―basically anyone willing to add understanding and nuance to Bumiller's observations of Japanese people and their way of life. Rather than a mere biography, the end result is an exploration of Japanese society using Mariko's personal life as the gateway into the world that shapes her.

It is a little dry in the beginning, reading almost like a textbook with an ample dose of somewhat uninteresting "The Japanese do/don't do this" and "The Japanese do/don't do that" phrases. And granted, with the source material having been obtained in 1991 and 1992 and the book being published in 1995, much of its revelations are likely outdated. However, the book has a certain charm, a certain earnest desire for a foundational understanding of Japanese culture which, even 20 years later, makes it a useful starting point in university Japanese studies classes like the one my friend Sharon took. Plus, once the formalities are out of the way, the book actually becomes quite fascinating and even scandalous at certain moments.

For instance, I had read before about how anti-Japanese (and more broadly anti-Asian) sentiment was hot-blooded and prevalent here in the '90s, given the perceived "invasion" of Japanese automotive and electronic products posing a much-hyped threat to American industry. What I hadn't known, however, was that this enmity was aggravated by quite a few petty media-fueled scandals. A number of Japanese leaders received flack for publicly arguing or even suggesting that American workers were lazy because they didn't work as many hours and were not as self-neglectfully committed to their work as their Japanese counterparts, that as a result American products were of sub-par quality, that America couldn't dominate everything forever, and that Americans just needed to accept that it wasn't their time to shine anymore and shouldn't whine just because they'd been bested in something. Those last couple criticisms always made me cackle because, well, they're not entirely untrue. Such Japanese claims were certainly debatable and occasionally lacking sufficient evidence, but they sure made me laugh. And Americans at the time reacted... unsurprisingly. You'll see.

Going back to Mariko, it is both necessary and thoughtful that Bumiller gives space for her to examine her own position as a housewife. On the outside she seems average, but she's had a plethora of fascinating experiences and holds many unexpected ideas and desires. And quite frankly, though she knows that foreigners (and to a growing but lesser extent, Japanese people) regard Japanese housewives as downtrodden, she doesn't see herself that way. Mariko is overworked, without a doubt, but she actually believes that women are freer to have a life and personality than their husbands. Sure, her temperamental and whiny manchild of a husband (my words, not hers) undervalues her contributions and gets to tell her what to do, but he's nobody outside of his work. Whereas she can go on outings, have new experiences to meet new people, keep up hobbies and have personal aspirations, her husband's daily life and ambitions revolve around the company he works for. I'm not sure that I buy the argument that Japanese women altogether have more freedom than their husbands, but this is definitely a valuable perspective that I never would have considered on my own.

While I wouldn't say that The Secrets of Mariko is groundbreaking (perhaps it was at the time?), it is committed to developing as much of an unbiased and non-judgmental understanding of Japan as possible. I couldn't not give Elisabeth Bumiller her due credit for that. Whether you know and love a lot about Japan or are only vaguely interested, give this book a try. Even if only to say that you did, and that maybe you learned at least one new thing.


" Iwao does admit that the relationship between a Japanese husband and wife is 'almost too distant,' but she then contrasts this with her observation that relationships between husbands and wives in the United States 'may be too close.' In her view, American couples invest too much in marriage, wanting to 'know and understand what the other is thinking, feeling, and doing ―all the time.' Such intimacy, she says, can breed tension, stress, and exhaustion... One married woman I know told me that Japanese women are stronger because they don't have to say 'I love you' to their husbands all the time" (217-18).

"When I heard that people thought I was part Korean or Ainu, I felt like they were looking down on me... It meant they didn't think of the Ainu or Koreans as human beings... I heard that people were criticizing my turban and the direct way I talk... The turban is an expression of my resistance [to] all the Japanese who try to be the same. Everybody has a television set and a family computer. Everybody sends kids to cram school. If yellow is in fashion, everybody wears yellow" (239).