My Last Day in Japan.

My last day in Japan has come and gone, and I want to tell y'all about it.

The day started with JCMU's closing ceremony. A representative from each class level gave a speech, which of course meant I had to give one too. (I had the option not to make a speech, but it was presented to me in a "Well you don't have to do one, but we'd like it if you did" kind of way. So even though I agreed to do it, I didn't actually have a choice. But I figured hey, this is my last chance to use my Japanese for something important, so why not.) Everything went well. We received our certificates, the director gave a speech, student representatives gave their speeches, and that was it. Short and sweet. Afterward there was a "party" for staff, students, and host families to mingle together and celebrate the students' hard work. I was able to take pictures with all three of my senseis, so no I can finally introduce them to you! 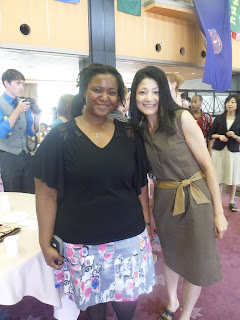 Matsushima-sensei was the instructor in charge of the fourth level, so I spent most of my time with her. She teaches in New York City, is very cultured and has this chic, cool, sophisticated air about her, but she's also extremely approachable. I found her to be surprisingly patient and understanding, and during those times when our conversations digressed from the course material I was amazed by the fascinating things she had to say about cultural studies, film studies, and other topics and issues that she knows a lot about. Matsushima-sensei is one of the most fascinating people I've ever met. Even though being in a class by myself was extremely lonely at times, I'm thankful that I had the opportunity to learn from her. 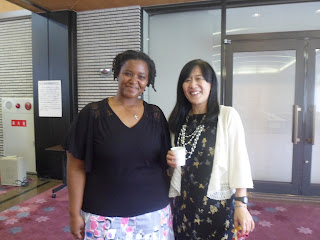 Next is Melville-sensei, who taught reading comprehension. Melville-sensei is... something else. She's incredibly animated and is louder than most other Japanese women I've met. In class she would go from joking about something loudly to speaking in a low voice about something serious in a split second, and those highs and lows could be intimidating at times. She also likes to push people to think clearly and develop their ideas, which was often frustrating but proved beneficial to me.   Once I got used to her, I realized that she is actually a really amiable person who wants her students to succeed.

Last but not least is Aizawa-sensei, who also taught reading comprehension. I really enjoyed having Aizawa-sensei as an instructor because in each class period he'd start these really interesting discussions, often about things that had nothing to do with the reading at hand. We would share our opinions about literature, cultural differences, word meanings, interpretations of course readings, social issues, and so on. He lived in the US for a number of years at one point so he understands a lot about America, but sometimes he would still ask me about American culture or even Black culture and I really appreciated that he was interested in what I had to say. He's also excellent at helping concepts get across to students, so with his help understanding the readings was a little easier.

After the party ended I went to my room to change my clothes, then hopped on my bike to go get one last look at Lake Biwa. While there I shot a vlog! And it's under 10 minutes! I'm getting better y'all. 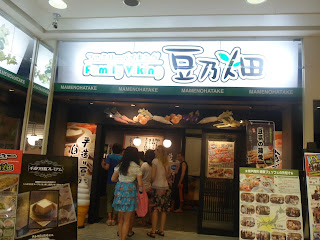 Afterward I returned to JCMU to turn my bike and helmet in. Then eight of us students went to Viva City mall to eat at a restaurant called Family Viking. (In Japan, they call buffets "Viking" or "baikingu".) This place was an all-you-can-eat tofu buffet, so all the food was either made from tofu or had tofu in it. It was much more tasty than it sounds. In fact, it was fantastic! I wasn't much in the mood for eating though, so I only had two plates and dessert, but I enjoyed everything I did eat.

Once we returned I came back to my room, wrote about yesterday, had my final Skype date with Ma, and now I'm writing about today. And tomorrow I'll be up bright and early so I can head to Nagoya and fly back to Detroit. When it's time to go, it's time to go. I've accepted that, so I'm not sad that I'm leaving. This summer definitely didn't turn out how I thought it would, but I can honestly say that my life is different now and I'll never forget this time I've spent in here Japan. I know I'll be back.
70 Days in Kansai photos (JULY/AUGUST) \
70 Days in Kansai photos (JUNE) 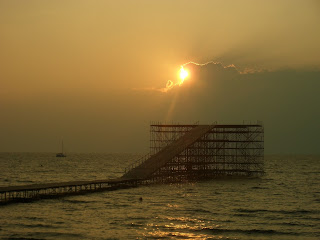