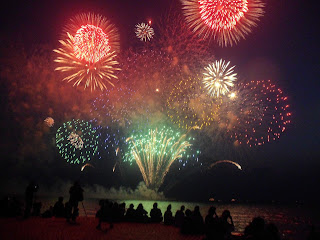 I went to Hikone's Great Firework Festival (彦根大花火大会/Hikone Dai-hanabi Taikai) yesterday! The fireworks were held right on Lake Biwa at Matsubara Beach, so all I had to do was leave my building and walk a few minutes to get there. I sat in a prime spot right across the water from the boat that the fireworks were shot from. The show was divided into parts, each of which had a theme and featured displays from firework companies from all over Japan.

Granted, this was only my first time watching fireworks in Japan, but I have to say that American firework shows just do not compare. The ones I saw yesterday were much brighter and the colors were more vibrant. There was a greater variety of styles and the executions were sharper. And there were actual shapes and pictures! For example: 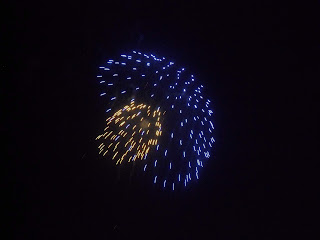 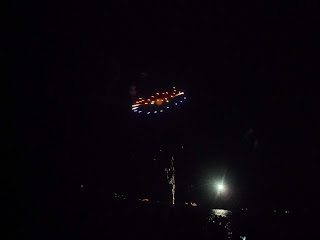 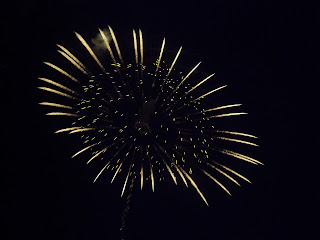 Some of the displays were so enormous that you couldn't see them in their entirety all at once. You had to scan from one end to the other to take all of it in. Then when they faded and the remaining fire fell toward the water, it was as one little Japanese boy near me put it, "雨みたいや!" (Ame mitai ya!/ "It looks like rain!").  The whole show was stunning. I took about 50 photos of the fireworks, so as usual follow the link below to see the rest! 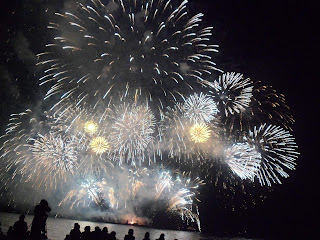