BOOKS! (The Wind in the Reeds) - proof

As a French student, I've always been vaguely interested in New Orleans. That interest evolved into a sense of commonality after Hurricane Katrina in 2005 (as a Metro-Detroiter, I see New Orleans and Detroit as two cities that America abandoned in similar ways, but that's a discussion for another day). And then that sense of commonality turned to love and fascination when I visited New Orleans for the first time with Ma this past March. And now it's one of the cities that I think of often when I ponder the world and what it offers. I'd like to go back soon, but in the meantime I'm open to learning as much as I can about it. Which is why I saw this advanced copy on the break room table at work a few weeks ago, I snatched it up before anyone else got the chance.

The Wind in the Reeds: A Storm, A Play, and the City that Would Not Be Broken by Wendell Pierce
(on sale September 8, 2015) 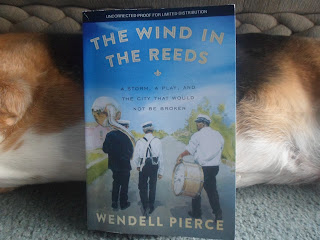 It's probably best to start discussing this book by explaining how it's slightly different from what's advertised. The front cover design, which includes a tiny fleur-de-lis, a painting of three Faubourg Treme marching band members walking down the street together, and the subtitle mentioned above, leads one to believe that this book is going to be all about New Orleans and its recovery from Hurricane Katrina over the past 10 years. The summary on the back gives a similar impression, reminding us about the destruction Katrina caused, and introducing Wendell Pierce as a successful actor and native son who is called home by the storm.To do his part, he stars in a production of Waiting for Godot to uplift his people, and also endeavors to rebuild Ponchartrain Park, the neighborhood that made him who he is. And you think that's going to be the gist of it. But it's not.

Wind in the Reeds is also a memoir, tracing Wendell's journey from one of Louisiana's first subdivisions designed for middle class African-Americans, to Juilliard, to Broadway and major acting jobs such as The Wire, Treme, and Selma (chapters 4 through 9). It's a family history, paying respect to Wendell's ancestors and tracing his origins in Louisiana back to slavery (chapters 2 through 4). It's a treatise on the transformative and redemptive power of art, and the great responsibility that artists have whether people respect the value of their work or not (chapters 1, 5 through 10). It's a condensed history of New Orleans' cultural and sociopolitical development (chapters 3, 8, and 9). It's a beginner's guide to New Orleans culture, tradition, and way of life (chapters 3, 8, and 9). And it's a consistent collection of reminders that there is no place in the world like New Orleans. It is still a city of value, and its people are committed to keeping it alive even when they have to do it all by themselves (chapters 1, 7 through 9).

I applaud Wendell Pierce's ability to write such a multi-faceted book and I appreciate how he breaks down two historical moments that I hadn't known much about: segregation in New Orleans during the Jim Crow era, and the treacherous development schemes and dirty politics that have been at play during New Orleans' post-Katrina redevelopment. Regarding the former, outsiders tend to think of New Orleans as a happy gumbo pot of ethnicities and cultures, but New Orleans has also had its own manifestations of racism as part of the Deep South. And regarding the latter, well, people keep trying to silence and erase the "undesirable" members of the population who make the city great, and the plot is still ongoing 10 years later.

Above all, Pierce's musings on art and artistry are what moved me the most. I felt not just moved, but convicted, as if I'd gone church and the preacher just so happened to preach a sermon that speaks directly to my current situation and state of mind. Artists must create things and express themselves, they can't not, but they also musn't take their work lightly. Pierce relays his insights about the necessity of art and committing oneself to one's craft in a deeply philosophical way that I've only ever read before in Oscar Wilde's The Picture of Dorian Gray. Granted, Wendell Pierce is coming from an actor's perspective, so what he offers would probably be most pertinent to other actors. But I wholeheartedly believe that, in addition to anyone remotely interested in knowing more about the city of New Orleans, anyone who is an artist in any way, shape, or form needs to read this book. It will humble you and really put the magnitude of what you're working toward in perspective.

"If art is both a sign of our humanity and the means by which we embrace it, there could scarcely be a more serious undertaking than to become an artist... Art reveals truths of the human condition that, lost in our everydayness, we cannot see. It transfigures the ordinary. Because we must see a thing before we can love it, art clears our vision so that our hearts and minds can follow the right path out of chaos and hatred and hopelessness, toward order, love, and redemption" (159).

"But I have it on good authority that can't died three days before the creation of the world. I'll go on, for as long as I can. What' the good in losing heart now?" (270).

"Everyone who has ever loved New Orleans, whether they were born here or got here as fast as they could, knows that that love costs, sometimes not less than everything. But if you can be faithful, if you can hold on through all the hurt and heartache, you may find resurrection in the life of a spirited culture like no other on earth" (302).