BOOKS! (Fresh Off the Boat)

So of course I found out about this book when the ABC sitcom of the same name came out some months ago. (A primetime sitcom on one of the big four major networks, led by an Asian cast?! Yes! Took 'em long enough!) But as I looked into the hype surrounding the show, caught tidbits of episodes here and there, and read about Eddie Huang charging that the show is a disappointing misrepresentation of his life, I gradually lost interest in the show and set my sights on the memoir itself. I figured, Well if this is Eddie's story and Eddie says that ABC isn't doing the story right, well let's go straight to the source and read what the man has to say about his own experience. Not commercialized. Not adjusted for mainstream vanilla palates. The real story, straight from the man himself. Now that I've read the book, I get it.

Fresh Off the Boat: A Memoir by Eddie Huang 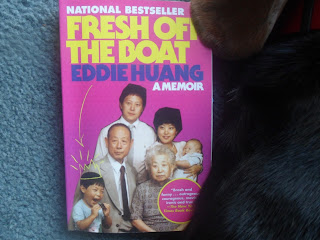 Born in the DMV, brought up mostly in Orlando, and hitting his stride as an adult in New York City, Eddie Huang is the eldest of three children born to Taiwanese immigrant parents. As largely unassimilated immigrants, his parents are "fresh off the boat" (affectionately but more often derisively referred to as FOBs), making Huang a first-generation Asian-American. He goes from an intelligent yet troublesome kid constantly making stupid and self-destructive decisions, to a streetwear designer, to a lawyer,  to a restaurateur. And along the way he develops into a hip-hop and street culture head who hustles, questions everything, passionately seeks knowledge, does whatevertheheck he wants to do, refuses to let others control him or look down on him for "that (Asian) face", and never backs down from a fight. Eddie Huang generously offers us his life story through Fresh Off the Boat, and it's brilliant.

I, for one, lovelovelove that Huang writes how he speaks, without pretense, and full of as much profanity and slang as he sees fit.  It's raw, it's honest, it flows, and even in his most worked-up and abrasive moments, his language feels cozy. From page to page, as I read it was like I was listening to one of my silly grown male cousins tell me about his shenanigans from "back in the day", and everything he learned from those moments. Huang is a misfit who can commiserate with various forms of struggle besides his own, and he strives to be open about his experiences and how they've affected him.

In addition to his bluntness, Eddie Huang seems to be of two minds about a number of things, including: 1) being Asian and 2) being Asian in America. But I would caution readers from perceiving his views to be contradictory. Rather, I would say he knows to accept things for what they are, but refuses to accept the unacceptable just because it's "tradition" or convenient for others. For example, Huang repeatedly expresses his pride in  being Taiwanese/Chinese, coming from a family of immigrant hustlers and go-getters, how innovative his people have been especially in regard to cuisine, and how he has stayed connected to his people's language, culture, and reverence for family/ancestors. But, he also pointedly criticizes how unnecessarily strict, controlling, and close-minded (and sometimes violent) he believes Asian parents can be, how Asian men especially have the individuality and wonder sucked out of them by their mothers, and how too many Asian-Americans play into the model minority myth by succumbing to aspirations of whiteness. His is a love that's critical and questioning, and when you keep that in mind, all of these ideas taken together make sense.

The same goes for the way expresses his feelings about the good ol' US of A. It's both his home and country, and yet not his home and country. No joke, in a certain passage he waxes poetic about universal food truths and what different kinds of people and cuisine have taught him about culture and good cooking ("America, I fux with you."). Then exactly ten pages later he flips the script and  frustratedly declares that trying to be yourself yet still be recognized by others as an "authentic" Asian or American or Asian-American is nothing but a trap ("Fuck you, America.") He both appreciates what this country has to offer but hates it for its lopsided BS, which is a sentiment that I'm sure many other people of color can relate to. I know I do. What you get over and over in this memoir is that while Huang doesn't take for granted all the influences that have shaped him, he just wants to be free and live his life on his own terms. And that's an idea that I think can speak to many people. I'd definitely recommend Fresh Off the Boat to anybody and everybody!


"It always hurt me writing or debating because I didn't share their references, but that summer I was determined that it wouldn't stop me. I wouldn't try to talk about things they knew anymore. I would use the references that made sense to me and make them catch up" (124).

"When foreigners cook our food, they want to infuse their identity into the dish, they have a need to be part of the story and take it over. For some reason, Americans simply can't understand why this bothers us. [I]t's imperialism at work in a sauté pan. You already have everything, do you really really, really need a Burmese hood pass, too? Can we live?... The most infuriating thing is the idea that ethnic food isn't already good enough because it goddamn is. We were fine before you came to visit and we'll be fine after. If you like our food, great, but don't come tell me you're gonna clean it up, refine it, or elevate it because it's not necessary or possible. We don't need fucking food missionaries to cleanse our palates. What we need are opportunities outside kitchens and cubicles" (248).