Before it gets too deep into fall, I'd like to share with y'all the set of dramas that I watched over the summer. This is part one. It should be known that I largely watch Japanese dramas without English subs now (yay for progress! And also for not having enough patience to wait on subtitlers to do their thing, woo!). Now, on with the review! 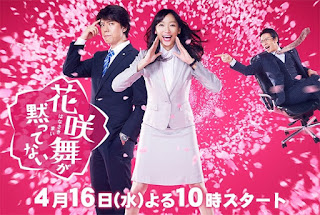 I'm lumping these two seasons together because very episode is the same. They all go as follows. As the quality control investigations team at a huge Tokyo bank, Hanasaki Mai (Anne Watanabe) and Souma (Kamikawa Takaya) are sent to check out an irreguliarity at a particular branch. Some big bad wolf of an executive there is doing something he shouldn't be, and is either pinning it on a little guy or making the little guy cover up the misdeed. Souma at first tries to rein in Hanasaki's temper and inquisitive nature ("I hate to disagree, but..."), but Hanasaki never gives up and eventually they both get down to what the problem is. Then Hanasaki confronts the wrongder, chastizing him for not being fit as a banker, and he tells her to shut up but she refuses ("Damarimasen!"). Then Hanasaki and Souma go on about their day, excitedly planning out what restaurants and local specialties they'll check out on their next assignment. Meanwhile the wrongdoer is punished, and everybody's boss's boss takes in the news with chagrin that Hanasaki and Souma are always getting in the way of his circle of corruption. On to the next one. And that's literally how every single episode goes. Not bad, just repetitive.

I appreciate Hanasaki being a strong character with an even stronger sense of justice who stands up for herself and others, but this free spirit of hers is severely hindered by the male-centered industry she works in. Men (even her work partner Souma) are always trying to shut her up, and no one takes her seriously precisely because she's a woman, and a woman who speaks her mind at that. The show often raises the question of what are banks for, and what role should they play in society? Hanasaki and Souma (and thus, the show itself) emphasize that the well-being of employees and clients─people─matter more than numbers and profits. But someone is always there trying to prove them wrong. Check this show out if you want to get a feel for model-turned-actress Anne Watanabe's acting chops and physical comedy, or if you just want decent Japanese listening comprehension practice without having to get too engaged with the storyline. 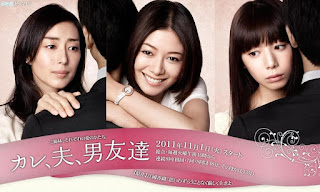 I watched this entire series in two days. It's a tale of three sisters who struggle individually with love and defining the relationships they have with the men in their lives. Main character and middle sister Haruko (Yoko Maki, also from 'Saiko no Rikon' and 'Mondai no Aru Restaurant') is a modern woman who does what she wants, determined to live life in the moment and without regrets. She doesn't feel the need to be tied down with marriage or labels like "boyfriend", when sometimes all she wants is sex. She puts herself first and though she doesn't try to hurt people, she's often oblivious to how her actions affect others. She loves her live-in boo only so far as it doesn't compromise her lifestyle; thus she can't commit to him they way he commits to her.

Older sister Asako is the exact opposite of Haruko, having taken on the traditional role of housewife with zeal, so eager to prove how great and proper her life is to her family that she endures daily physical and mental abuse from her husband behind closed doors (a victim who demonstrates the ways in which abused women often feel a warped sense of responsibility to stay, not just out of fear but also out of a duty to protect or save their abuser). Youngest sister and college student Ikuko sometimes sees herself as an alien because she doesn't relate to other people nor see the appeal in love and relationships like "normal" people do. She engages in relationships and has sex with her partners because she's curious as to what the big deal is, and thinks this is what she has to do to be more like a regular human being. Originally a daddy's girl, she also has major daddy issues and holds a grudge against her father for cheating on their mom and leaving to marry a younger woman. Together and separately, this trio of sisters is out there just trying to figure it out. I guess the most prominent lesson I took from this drama is that sometimes you can't fight your feelings. Even if you don't want to be in love, even if you think you've come to terms with the breakup, even if the person you love has hurt you unforgivably. And sometimes, despite all those feelings, you must accept when done is done and move forward with your head held high.

'Hanasaki Mai' had huge ratings when both of its seasons aired, but it's just meh to me. However I would highly recommend 'Kare, Otto, Otokotomodachi'! It's geared toward women, but if you're not the type to unnecessarily shy away from so-called "chick flicks" or "girly" shows for fear of cooties, give it a shot!

Be on the lookout for part two tomorrow!
Posted by Deela (Danielle G.) at 7:09 PM