BOOKS! (How to Be Black)

Recently I did something unprecedented since coming to college. I read for leisure, and I didn't even have to wait for a major school break to do it! In one week I read two books, and they had absolutely nothing to do with my classes. It felt like I was reconnecting with my old bookworm self, and it was blissful. First up is an honest work that is sure to get people talking.

How to Be Black by Baratunde Thurston

This book is a New York Times Bestseller, and even though it's only been out for just under two years, I read that it's also in the process of being made into a TV show. Pretty cool, right? It's always inspiring to see creators get recognition for their work. Plus, I have a semi-personal connection to this because my yoga teacher is Thurston's older sister. Small world. Moving on... 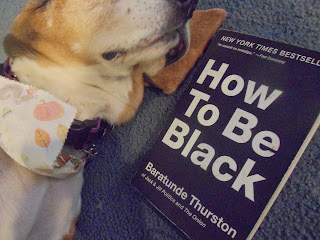 Deliberately released during Black History Month (a.k.a. February) of 2012, How to Be Black is part biography, part social commentary on the joys, struggles, and realities of being black, and part group discussion. When addressing certain issues or experiences Thurston includes input from a group of his comedian/writer/artist/activist/conscious people friends, which he refers to as "The Black Panel." As can be deduced from the title, most of the people on this panel are black. But for the benefit of white readers, Thurston also included one of his white Canadian friends just to be "fair". (Because you know, for some white people nothing is truly diverse and conversations about race are never  fair if they don't include them. Sorry, Thurston's sarcasm must be rubbing off on me. Moving on.)

Let me say right off: This book does NOT teach people how to be black. Thurston basically chose this title for its shock value to get people interested in it. What this book really does is humorously yet intelligently discuss what it can often be like to be black.  This includes dealing with non-black peoples' often low, demeaning, or constraining expectations of us. Thurston's primary goals are to drop knowledge and make readers laugh. To an extent, he sheds some light on "our" story by telling us his story.

This is also not a "we hate white people" piece. (Everything isn't always about y'all, believe it or not. Sorry, sarcasm again. Moving on...) In addition to poking fun at how little most white people understand us, he offers an over-arching lesson or theme: "Being Black" means whatever we as black people want it to be. We can make anything "something that's black" or "something that black people do", because no matter what we're doing we'll always be black while doing it. We must not confine ourselves to the narrow definitions of blackness that we use against each other, and worse, those same narrow definitions that non-black people continue to set for us. We still have a lot of progress to make in this country, and we can't do it alone. The key is knowing and loving ourselves proudly, making ourselves seen and heard, and being willing to help non-black people understand us so that we can all collaborate better.
If you're curious about "the black experience" or just want something funny yet intellectually stimulating to read, I highly recommend this book. It might also bring you some fun times as you catch strange looks from people who see you reading it in public, if you choose to do so. My favorite chapters are "How to Be the Black Friend", "How to Be the Angry Negro", "How to Be The (Next) Black President", and "How's That Post-Racial Thing Working Out for Ya?".
Favorite quotes:

"Since then [the 1960s] there's always the concern that our nation's black population will rise up Nat Turner-style and exact revenge through violent revolution. Much of this rage has been effectively muted and channeled into commercial hip-hop, unrealistic dreams of professional sports careers, and daily doses of poison masquerading as nutrition in the form of poorly stocked grocery stores and fast-food businesses in black neighborhoods. There's just not a lot of rioting energy left, with so many distractions" (p. 188).

"It shows our values as a culture when somebody says, 'I don't want to be called a racist.' Really what they're saying is, 'I want you to like me. I don't want to not be liked. I want to still be okay with you.' They don't mean, 'What I really want is to know and understand experiences of people of color so I don't sound ignorant.' That would be great. And so, it shows that, as I have said, we are operating at this third-grade level of race relations. And it's that third-grader that goes, 'Please like me, do please like me,' versus 'Can I understand?'" (p. 243).