Tuesday might not have been very eventful, but I still got to experience new places and eat delicious food. So all's well that ends well! 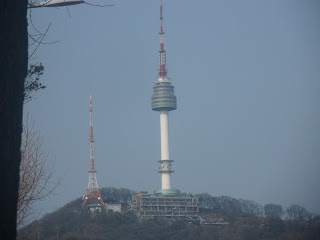 On Monday morning Ande and I both were randomly craving eggs benedict, and after some quick research we found a brunch cafe that we were both interested in. But that cafe is closed on Mondays, so on Tuesday afternoon our first stop of the day was Summer Lane Cafe in Itaewon. 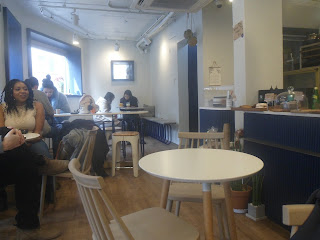 Itaewon is where the US military base and other government-owned facilities are, so there are lots of foreigners of innumerable nationalities who live in and/or frequent this area. As such, you can find all types of foreign food, including brunch fare. Even before we picked a cafe to go to, Ande predicted correctly that Itaewon would be the place to go to find eggs benedict. From our usual bus to Seoul, we took the metro to Nolsapyeong station whose exit opens onto a street that gave us an even more excellent view of Namsan Tower than the night before. 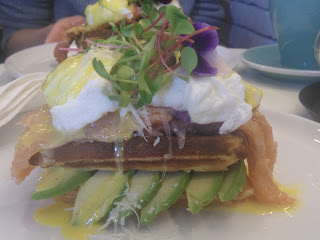 After walking through some slightly hilly neighborhood streets, we arrived at Summer Lane. It's supposedly an Australian-style cafe (I guess the owner spent some time in Australia and that was her inspiration?), and the owner is a Korean woman who speaks English beautifully. It was small but bright, the color scheme was white and navy blue, there were plenty of windows, the lighting was warm, and the food was exactly what we wanted.

Ande ordered the eggs benedict with bacon and I ordered the one with salmon, and both of our dishes included layered waffles (instead of English muffins) and a flower on top for decoration. The entire experience was perfect! Plus there were two other black girls in there, and I was able to exchange a smile-nod with one of them, so I was over the moon! 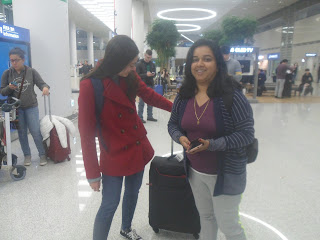 We walked back the way we came to take the metro from Nolsapyeong station, eventually transferring to line 1 which goes all the way to Incheon International Airport. Sharon's arrival from Detroit was scheduled for that evening, so we were there to pick her up. We stood waiting with a sizable crowd of other people for a little over an hour (or was it two hours)?, straining to look over and between bodies to get a first glimpse of Sharon walking through. And then she finally appeared! 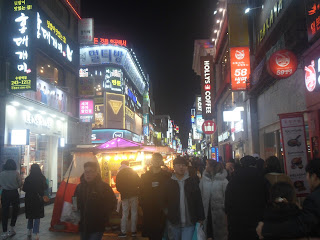 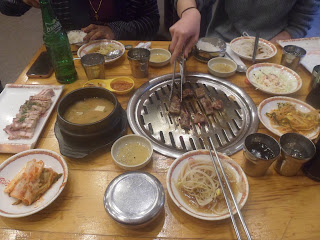 Now a trio, we took the same bus back to Suwon that Ande and I took when I first arrived. And just like I did, Sharon got to choose what we ate for dinner since it was her first night in Korea. She wanted Korean BBQ (samgyeopsal), so after dropping off her stuff at Ande's apartment we took the bus to the Suwon Station area to scope out a restaurant. Directly across the street from Suwon Station is a wide, brightly-lit street that's full of food and shopping and is notably frequented by young people, and this street was packed that night. We picked a certain restaurant having no expectations, but we thoroughly enjoyed the food (way better quality and more flavor than Ungteori, though Ungteori certainly wasn't bad)!

Then we trailed Sharon as she browsed through an Innisfree beauty store on that same street before taking the bus back to Ande's place. Wednesday would be our first time going to Seoul as a trio, and for the second half of the day Sharon and I had to navigate Seoul on our own! More on that tomorrow!