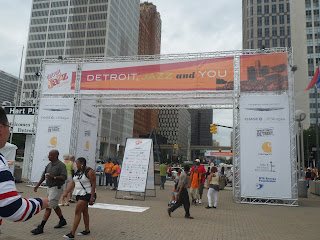 I decided to go home for this Labor Day weekend, and yesterday Ma and I went to the Detroit Jazz Festival (DJF)! Neither of us had been before, but I'm glad that we finally got out of the house and decided to go this year. We had a great time!

﻿﻿The three acts we were able to see were Michael Weiss Quintet, Mack Avenue SuperBand, and The Delfeayo Marsalis Octet. The Quintet was alright, the Octet was better, but Mack Avenue SuperBand? Those men were on fire! I didn't catch the beginning of their set, but once I found them I stood for nearly an hour listening to the rest. The eight-member, highly-skilled SuperBand features famed saxophonist Kirk Whalum and legendary vibraphonist Gary Burton. A variety of pieces were played, some by well-known composers and some that were composed by individual members of the band. Whalum being a preacher's kid, the band also played its own versions of two gospel songs: Donnie McClurkin's "Speak to My Heart" and the classic "I Want Jesus to Walk with Me". These men were so much fun to listen to! The way they played, it was like they were having a conversation with you via the music; putting a fire in your chest, heightening your senses. But then again, that's what I think jazz does. It invigorates people.
﻿
Unfortunately, I don't have any video from today because I was enjoying the music too much to try  shooting anything decent. I had taken my video camera with me, but I figured juggling that and my photo camera would be a hassle, so I didn't bother. I don't yet have that knack for jumping on opportunities and pulling my camera out to film things just as they go down or get good. Basically, I just  need to stop being lazy, get out more often, and shoot things! I've been thinking that I might use my video camera just when I travel anyway, but that's neither here nor there.
﻿
﻿﻿DJF continues through Monday September 2nd, so if you happen to be in town, head to Hart Plaza to join in on the fun! 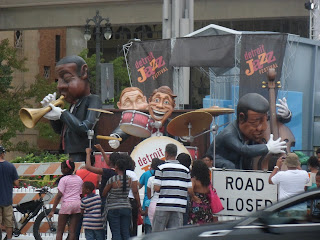