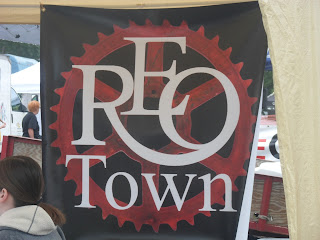 To start off, I apologize for not writing about this event until a week after the fact, but as it happens every year, schoolhasdevouredmylife. Anyway, last Saturday I went to a really cool event in Lansing called REO Town Art Attack! It's a small but lively art festival whose aim is not only to celebrate art, but to bring art and the local community together. Vendors from various local art and wellness-related shops were there, along with artists from all over Michigan. A number of bands and musicians also performed.

The real spectacle of the festival, however, was the art competition. A group of artists had 9 hours to take items of junk from a wagon and make art out of it. Creating beauty from rubbish was their mission, you could say. But this wasn't you're ordinary timed create-something competition. All the participants were so chill about it. There was no rush. There were no competitive vibes. And coolest of all, these artists weren't off limits. You could stand by and watch, or you could go up and talk to them. Some would even let you help them with their work. The whole thing was fascinating. It was hard to tell who was involved in the competition because there were multiple projects going on alongside each other and artists kept moving around between them. But in all there were three beauty-from-rubbish projects, four graffiti projects, one paint (cityscape) project, and a couple airbrush (portrait) projects.

Just B Yoga also had tent space at Art Attack!. I was the studio's marketing intern for all of a week (don't ask), and my first and last big project was to walk around the festival and take pictures of people doing yoga poses as a prelude to an upcoming yoga-art project. Sounds pretty cool right? It was definitely more fun than I'd expected. B said she needed me to be aggressive and as extroverted as possible, and that's what I was. I usually don't talk to people I don't know, but I went up to complete strangers with no problem. I introduced myself, told them who I was with and what we were doing, and you know what? I actually convinced people to do yoga poses for photos! Some of these people had never done yoga before and I had to show them what to do, but they were still willing to do it! It was awesome. We got a total of 20-30 photos that day. Meanwhile, B and Tara were doing yoga on the sidewalk to attract people. They also caught a couple photos of me. 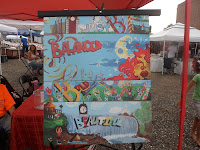 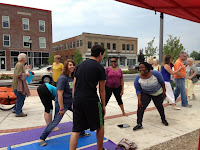 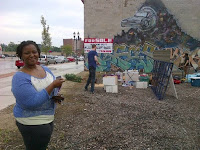 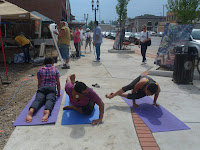 It's funny, though. As soon as everybody from Just B packed up and left, and my job was over I returned to my regular self. Walking around the festival, minding my own business, trying to stay out of people's way, not trying to talk to too many people. It was like there had been a switch inside of me; I switched on for the task at hand, but once that was over I switched off  and was back to normal. Just like that. Now that I think about it I probably do that to some extent everyday, but it has never been as striking to me as it was on Saturday. 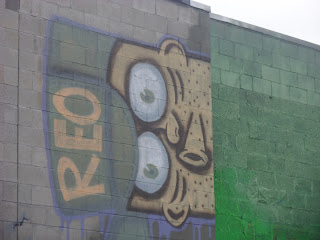 To be honest I hadn't been excited about having to spend 3-4 hours of my Saturday at this festival I'd never heard of before. But I really had a great time at Art Attack!. So many beautiful creations, and beautiful people. A little rain, and much more sunshine. And all the while, a bunch of folks with good attitudes who just wanted to enjoy the day.
Posted by Deela (Danielle G.) at 1:27 AM

Email ThisBlogThis!Share to TwitterShare to FacebookShare to Pinterest
Labels: Do the Yoga