Do the Yoga: Red Lotus Yoga

I said a while ago that I'd write about my secondary home studio, and now's the time. Last Saturday was my last day practicing at Red Lotus Yoga before going back to school. I practiced here before and after I went to Japan this summer.

I like this gem a lot, but in a different way than I like my first gem. 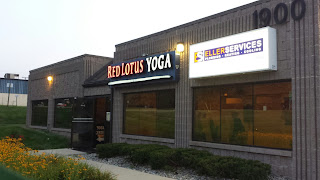 
Red Lotus Yoga is a huge studio, or at least the biggest I've ever been in. It's beautifully furnished, impeccably clean, and houses two studio rooms: a smaller Studio A, and a much larger Studio B.


"Where Yoga Comes to Life" 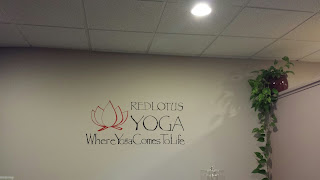 Red Lotus's slogan is "Where Yoga Comes to Life". One of the things I appreciate most about the place is how some of the instructors often include personal facts or stories about themselves that help students to apply the concepts expressed in class to their own lives. Lynne, the Yin Yoga instructor whom I've quoted every now and then, is particularly skilled at this. Nick (Slow Flow, Slow Flow Vinyasa) doesn't say much about himself, but he always plays a couple soothing melodies on his guitar while we lay in corpse pose at the end of his class. Other instructors I've had are Brian (the owner; Slow Flow Vinyasa), Julie (Slow Flow), Megan (Slow Flow), and Fred (Slow Flow).
﻿
﻿﻿﻿﻿﻿﻿﻿﻿

As you can see, most of the classes at Red Lotus are Slow Flow and Vinyasa. But the studio also offers Basic Yoga, Gentle Yoga, Yin, Rise & Shine, Short Form Ashtanga, Hot Vinyasa, and Loving Kindness Yoga classes. RLY also runs its own yoga school, The Red Lotus School of Yoga, through which people can learn more about yoga and wellness in addition to becoming certified yoga teachers. 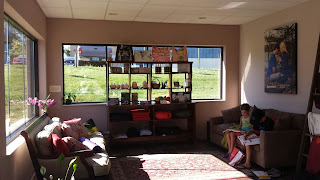 If I had to say one negative thing about the place, it would be that I'm a little confused about Red Lotus Yoga's message. It calls itself a community and maintains that yoga is for every body, as many yoga studios do. RLY is certainly a welcoming place, but I wonder to what extent it can actually be considered a community. If you mean "community" in terms of a place where the staff and instructors are nice-enough, fellow students are polite-enough, and teachers are helpful and do their best to attend to students' needs, then RLY is surely that. But if you mean "community" in terms of  a place whose people feel connected to each other, whose membership isn't socioeconomically exclusive, and whose students and staff usually have conversations that go significantly beyond first names, common pleasantries and yoga-related topics, then not so much. I'm learning that professing a "community" while lacking it in practice is a common issue for yoga studios, so I do not mean to single RLY out. It's just that because I'd gotten accustomed to a pretty non-traditional studio, seeing how a larger and more established studio in an affluent area works has come with certain observations and slight disappointments, that's all.
﻿﻿﻿﻿﻿﻿﻿

Again, I'm not knocking the place. Red Lotus Yoga is great, and I love going there! Everyone has those days where you want to just do you and not be bothered. So if you want to go to a studio with reasonable prices, check-in, not have to talk to folks too much if you don't want to, do work on your mat, pack up, and leave feeling amazing, then this place is awesome. If you want a studio that feels a little more homey, where it's easier to get to know people, then RLY might not meet that expectation. 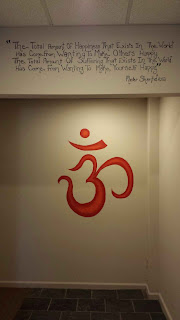 Overall, Red Lotus Yoga is a pretty cool place to practice. I don't look anything like the white, middle to upper class majority of people who also practice at Red Lotus Yoga. However, whether teacher or student, I've never received any words, looks, gestures, or vibes from anyone that sent the message,  "You shouldn't be here." And as business-like as it might feel, Red Lotus's people are pleasant and it's hard to beat the quality of physical and life lessons one gains from the studio. You not only move your body, but you feel and learn. If you're ever in the Rochester Hills area, check this place out! 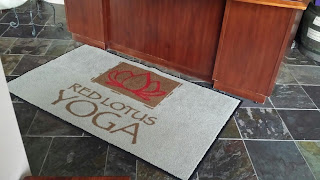 Email ThisBlogThis!Share to TwitterShare to FacebookShare to Pinterest
Labels: Do the Yoga