Want to know a funny story? Before I'd looked her up, I thought Maxine Hong Kingston was either a blasian woman, or a black woman who married an Asian man. The only Maxines I've ever heard of are black, and I've certainly never heard of an Asian woman having that name. So I was sure that this author must be black or connected to black people in some way! Come to find out, she is a first-generation Chinese American; her parents came from China before the Chinese Communist Revolution.
The Woman Warrior: Memoirs of a Childhood Among Ghosts by Maxine Hong Kingston 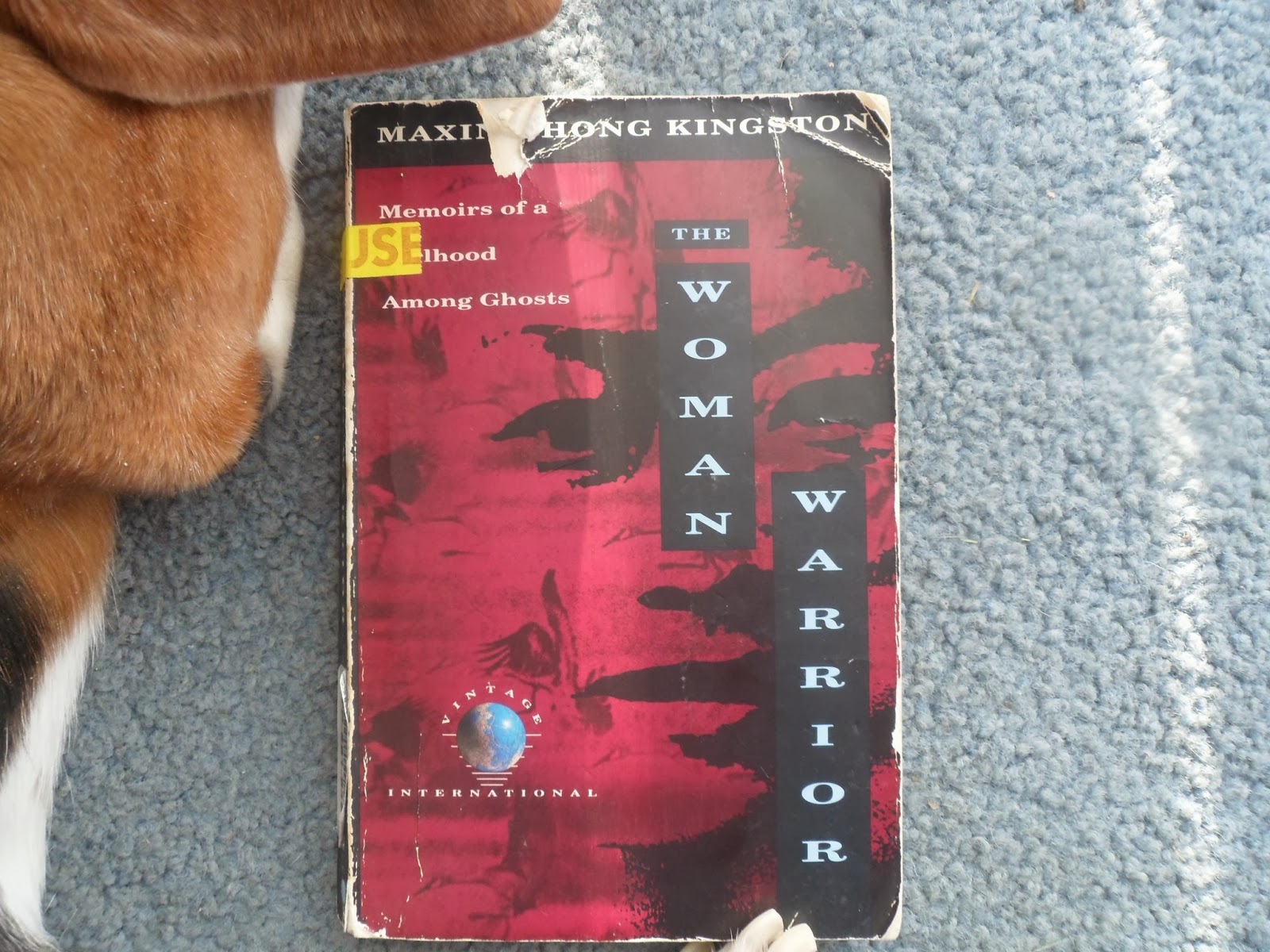 Like The Namesake, this book largely a story about immigrants. It's considerably different however; it plays out on the West Coast, and it is written from a female perspective. As Kingston demonstrates in some of the stories she tells, women are expected to be the keepers of culture, home/family, and tradition. However, while they are burdened with such responsibility, they suffer the worst during hard times and periods of change because they have little agency in traditional society. With this in mind, "woman warrior" can mean a number of things. It can mean an actual warrior who is empowered to defy rules and to protect and uplift her people. In a simpler sense, it can also mean any everyday woman fighting to survive, stand up for themselves, and/or make sense of life.

The first word that comes to mind when I think of this book is "stories". Kingston even uses a term "talk-story" to indicate when people tell tales. The book is full of them: ancient myths, folk tales, anecdotes, unmentionable secrets of the past, world events, recollections. They also vary in location and perspective, ranging from the legend of Fa Mulan, to Kingston's mother's experience fighting off a ghost, to Kingston's bullying of a childhood friend. It can be confusing to keep track of what's going on as she wraps one tale around another, pauses one retelling to add pieces of another. However, I think that confusion is the point. For much of her life it seems that she herself is confused. It is hard for her to distinguish between what is particular to her own experience and what is Chinese/Chinese tradition. I think she uses a variety of interconnected stories to demonstrate that, growing up Chinese-American, her experience and identity are not bound by one place and one time period. Also, since stories function as memories here, they do not just belong to her or her generation.
The second word that comes to mind here is "ghosts". There are a variety of ghosts in this book. Some are literal ghosts (evil spiritual entities not be confused with the more revered and benevolent "spirits"). Some are imagined or felt, and function as warnings. Some are people. It's interesting to me that Kingston rarely refers to Americans as people. She and other Chinese characters in her memoir speak of them as "ghosts". If I were to guess why (assuming there's a reason for this) I'd say that it conveys the sense of being on guard in a strange land, surrounded by ignorant yet powerful strangers who are sure to have malicious intentions. Emigrants need to make a life in their new home, yet also keep their distance from American "ghosts" in order to avoid losing themselves.

While it's not the easiest read, I really appreciate Woman Warrior for its complexity. It's not even just the content; some aren't even sure what genre this book fits into! And I think that being able to create something that no one can seem to put a finger on or enclose in a box is an incredible skill and  accomplishment.


"Perhaps women were once so dangerous that they had to have their feet bound." (p. 19)

"I can't sleep in this country because it doesn't shut down for the night... Time was different in China. One year lasted as long as my total time here; one evening so long, you could visit your women friends, drink tea, and play cards at each house, and it would still be twilight... Here midnight comes and the floor's not swept, the ironing's not ready, the money's not made. I would still be young if we lived in China." (p. 105-106)