As I've mentioned many a time before, I landed exactly where I didn't want to be post-graduation. But you know what I've learned this past week and a half? The upside to graduating from college and moving back home with your mom with no full-time job prospects is... You finally have the chance to get back to the things you love! Like reading and writing about books by unequivocal choice. Last week was my do-nothing week, and this week is my get-back week, and for book reviews I'm starting back with Crazy Rich Asians.

My favorite singer Chrisette Michele recommended this book on Instagram sometime last year (even held a giveaway for it, if I remember correctly). The title and cover piqued my interest, so I got Ma to get it for me as a birthday present in December. I didn't end up getting to it until this April, and it was the only book I could squeeze in for leisure during the entire semester. And let me tell you, it became the perfect escape for me during my final month of school. Especially as my dontgiveacrapgetmeouttahere meter got higher and higher, and I became more inclined to forget that I had assignments to tackle or exams to study for. So already out the gate, a huge hug and thank-you go to Kevin Kwan for this marvelous distraction! 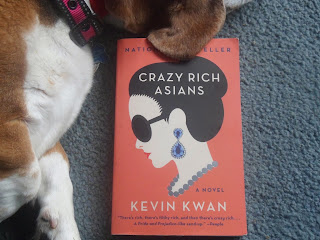 Having had a stable relationship with her Singaporean boyfriend Nick Young for a few years, Chinese-American economics professor Rachel Chu excitedly takes him up on his offer to visit his home country together from their current locale of New York City. The impetus for this trip is Nick's best friend's wedding, and as far as Rachel knows, the rest of the summer will simply be an extended vacation for her and her man.

What Rachel doesn't know is that Nick is the heir to one of the wealthiest, most secretive, and established old money families in Singapore. Futhermore, his best friend's wedding is actually the A-list spectacle of the year in Asia. Nick's either in denial and being willfully and egregiously modest about his background, or he's just so enmeshed in high society that he fails to see how his experience isn't "normal" for the average person. Either way, he doesn't sufficiently explain the full extent of his family or his social stratum to Rachel beforehand, and so Rachel is thoroughly unprepared to handle the lifestyle she's immersed in upon arriving in Singapore. Overwhelmed is not even the word. And that's what makes this meeting of middle class "ABC" and old money/absurdly new rich Asia both painfully awkward and unbelievably hilarious.

I mean really. The snobbery and elitism, the absurdly extravagant displays of wealth, the even more absurd stinginess and secrecy about wealth, the adopted old-world European sensibilities, the self-hate (really, what's the deal with disdaining China and "Mainlanders"?), the petty draaamaaa, the stringent parent-child dynamics, the old money-new money dynamics, the intrigue and rumors, the two-ton weight of watchful eyes and expectations, the opulence, the power/capital to go and do whatever you want whenever you want it.... It. is. bananas. Rachel gets overloaded by this world while also discovering some long-held secrets about her own family. It's juicy secrets and family drama from all sides, and I am all for it!

You know what I absolutely LOVE about this book? I mean, other than the obvious (the focus on a group of contemporary Asian people, set in a part of Asia that I'm not familiar with). I love Crazy Rich Asians because it's so funny! Like genuinely, smartly, cover-to-cover consistently funny! In fact, I don't think a book has ever made me laugh as much as this one did. Maybe Waiting for Gertrude is a close second, but still. My point is that reading Crazy Rich Asians has been the most engagingly fun reading experience I've had in a long time, and I stan for it. (Can you stan for books? Oh well. I stan for this one.) Best believe that when the sequel China Rich Girlfriend comes out on June 16th, buying it will be the first thing on my to-do list that day. And whenever the Crazy Rich Asians film hits theaters, I'll be there.

Are you one of those nosy people who loves getting in on other people's business? Are you fascinated by the secrets and lifestyles of the rich? Are you interested in learning a little more about East and Southeast Asia? Are you in need of a humorous distraction from whatever you don't feel like doing right now? If you answered yes to even one of these questions, then Crazy Rich Asians is for you! Enjoy! And you're welcome.

"Remember, this is Asia, and first impressions can be deceiving. You know how most Asians hoard their money. The rich are even more extreme. Many of the wealthiest people here make an effort not to stand out, and most of the time, you would never know you were standing next to a billionaire" (152).