I don't think I've waited so eagerly for a book since Harry Potter and the Order of the Phoenix came out in '03. Ever since I finished Crazy Rich Asians back in April and found out there'd be a sequel coming out on June 16th, I've been sooooo ready! I walked into work that Tuesday on a mission! The perks to working in a bookstore: when the book you've been waiting on for two months finally releases and you can't find it anywhere on the sales floor, but you KNOW in your heart of hearts that it's in stock because you've checked the inventory catalogue a billion times... you can STILL find a way to get your hands on it! Thanks so much to my supervisor N for showing me where to find this book! I finished it during my week in Georgia and couldn't wait to write about it. 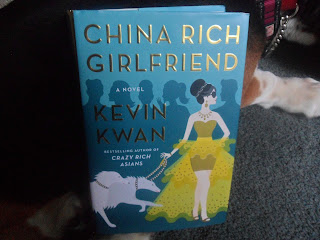 As a sequel I think this novel is solid. Not spectacular, but solid. It wasn't as much of a fun ride, but for me I think that was mostly because I went in expecting Rachel and Nick to be at the center in the same way that they were in the first book. Kwan made me fall in love with them as a couple in the first book, so I'd anticipated that the second one would continue to closely follow the development of their relationship.They are still prominent, but with the exception of their wedding and Rachel finally meeting her father for the first time and facing the fallout from that, more of the spotlight shifts to other characters. Characters like Rachel's high-flying half brother Carlton, Carlton's attention-grabbing heiress and fashion blogger girlfriend Colette, Nick's fabulous cousin Astrid who's losing herself in her ever-evolving marriage, and social-climbing soap opera star turned trophy wife Kitty Pong who's grappling to gain acceptance within high society.

In China Rich Girlfriend the setting expands from primarily Singapore and Hong Kong to mainland China, and so we also become acquainted with new characters who take baffling wealth, extravagance, and bad behavior to a whole new level. This includes the above-mentioned Carlton, Colette, and Rachel's father Gaoliang, who happens to be a pharmaceutical tycoon and a high-ranking politican. And I'm reading these character lines and subplots, all the while thinking Okay, okay, that's all well and good but what about Rachel and Nick? Let's get back to them! I just didn't feel as connected to them as I'd wanted to, and I dove further and further into the book not fully grasping (or perhaps not wanting to grasp) the new direction that Kevin Kwan had decided to go in with this one. Having read the whole thing now, I think it was wise on his part to make this book more about the ensemble of characters instead of purely focusing on the same two people as in the last book. Rachel and Nick are still the reason readers come to the party, as all the subplots connect to them in some way or another. But we also get more details on the issues and secrets of certain characters who we may have overlooked in Crazy Rich Asians.

With rapid economic development and the ever-increasing instances of overnight riches making up the China backdrop of this novel, the most striking gap that presents itself is generational. On one hand you have the new money Chinese who remember growing up in poor villages and experiencing Chariman Mao's reign, and on the other you have their children who were born into wealth and are driving the future of the "new" modern powerhouse that China is becoming. And of course, who could forget the chasms between between the rich, richer and richest? Sure, the one-upmanship amongst the rich, popular, and powerful will never cease, but ultimately this sequel teaches us that you can't change people, and it's really better for folks to just embrace their true nature rather than trying too hard.

Though China Rich Girlfriend wasn't exactly what I'd imagined it would be, I'm still a huge fan of this series. Kevin Kwan's got an excellent thing going, and I can't wait until the film adaptation of Crazy Rich Asians comes out. According to recent interviews he's got at least one more book in the works following this one, so I'm very interested in seeing how he decides to wrap up the series!

"Trust me, that's the classy way to do it. You want people to speculate. You want to be that unconfirmed report" (21).

"The two of you might have grown up like peasants, but I am not a peasant, and you did not raise me to be one. It is 2013, and I am not going to get married and pump out babies just because you want a barrel full of grandsons" (295).

"As Astrid stood alone in the middle of the forest recalling his words, it was as if she could suddenly hear the trees speaking to her. In the deepest hollows of bark, in the rustling of leaves, she could hear them whisper, He did it out of love, he did it out of love...It was an act of pure, unselfish love...Astrid realized how much she had struggled to change for Michael, and how much she no longer wanted to. What she truly wanted, what she had always wanted but failed to realize until this moment, was someone who loved her just the way she was. Someone like Charlie" (339).