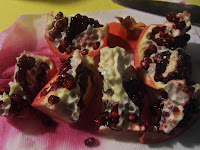 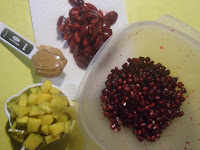 Today's treat is an improvisation of Blogilates' "Fig Power Smoothie". When I went to the store the other day I couldn't find any figs, so I got a pomegranate as an alternative. I used these instructions to figure out how to cut and de-seed it. Pomegranates are cool to marvel at on the inside once you open them up, but be careful! They're easy to cut and pull apart, but the seeds are known to squirt and stain. My advice to you is to not wear anything you care about while working with one, and be sure to promptly wipe the surfaces on which you cut it.The only other adjustment I made was using cherries instead of strawberries, since that's what I had in stock. I threw together the seeds of 1 pomegranate,  1/2 cup of chopped mango, 10-ish cherries, 1 tablespoon of peanut butter, 1 cup of almond milk, and ice. Blend, et voila. 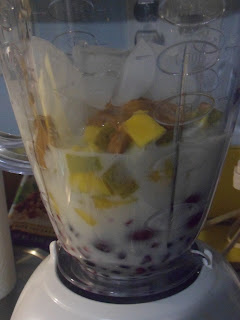 This smoothie is... interesting. It certainly tastes delightful. And I actually like the crunch of the pomegranate seeds because they remind me of those bubbles that burst in your mouth that you can get put in your boba─except pomegranate seeds are smaller, crunchier, and not as juicy. But the smoothie's got this odd peanut butter smell (thankfully the taste of it isn't as strong as the smell) that's just... odd. Not bad, but odd. I'm sure that putting peanut butter in smoothies isn't a new thing, but the fruity taste and the nutty smell just don't match in my head. It's almost puzzling. I guess I just need experiment using peanut butter more often so I can get used to it. Maybe try the original recipe as is. 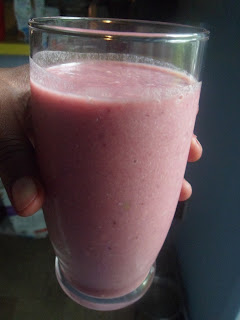 Absolutely love the crunch, though! (Pro-tip: Anytime you want, you can just take the seeds fresh out of a pomegranate and eat them as a snack.) And it tastes great just like all the other Blogilates' smoothie recipes I've tried. I would definitely recommend this one if you're looking to try something different.