This morning I woke up to loud chatting and cackling,  girls doing their hair (Nay installing another weave for my cousin Jess and dying our fledgling naturalista Kay's crop blonde), and swollen feet and ankles. Don't know what's going on down there, but hopefully it won't last long. 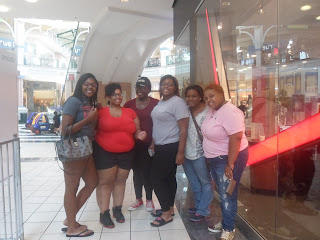 Around 3pm we finally got out of the house and went to Arbor Place Mall. Nay drove her car and I drove her dad's car. (I hadn't known that driving would be in my contract until today,  but ok let's go with it! I'm from Michigan, where kids learn to drive before they pass elementary school─I can do this!) My cousins Trish and Neesh rode with me, and all the way to and from the mall Neesh jokingly proclaimed how appalled she was by my driving and called on Jesus every time I pressed the breaks or turned a curve. 'Twas pure comedy! 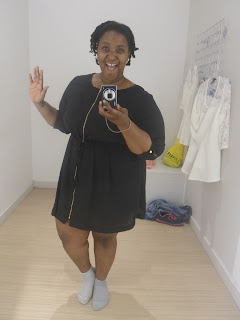 Once at Arbor Place we popped into Forever 21, where I found an emerald green knit tee for $10. Then Nay pulled me into a plus store called Fashion to Figure on what she called "a fashion emergency", to find me something to wear tonight for Jess's birthday and for whenever we go to a club this week. I found a white peplum top with lace 3/4 sleeves,  and a black dress that zips up in the front and has a drawstring waist/bust. Normally shopping and malls are not my thing. Having image issues coupled with an aversion to spending money means I hardly venture into clothing stores unless I'm getting something for someone else or Ma makes me. But once I tried them on, I was so elated that I'd found these two items that were pretty and fit me well, that I didn't think twice about buying them. This was a significant step for me because it was my first time ever buying a dress for myself, and I haven't worn a dress in almost 10 years! Plus the top and the dress were on sale and altogether only cost me $22. No guilt necessary. 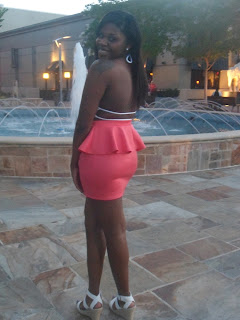 From there we returned to the house to get gussied up before driving to Cumberland Mall to celebrate Jess's birthday! We had a short photo session before proceeding into the Cheesecake Factory there. I got the chicken and shrimp gumbo and the cherry cheesecake for dessert. Usually I avoid places like Cheesecake Factory that use their decor/atmosphere, presentation, high prices, extensive menu and mouth-watering item descriptions to fool you into thinking you'll be eating the best meal of your life, only to not deliver. But I was very impressed with that gumbo! 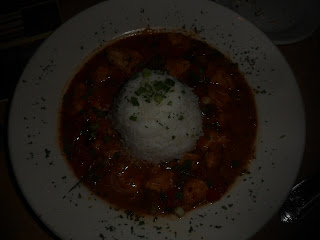 Unfortunately not all of my cousins were as pleased with their dining experience. Something you need to know about my cousins is that they hate spending more than $20 on a meal, they hate trying new things, and they're extremely picky. They are, in short, a mild nightmare for waiters. Besides the one of us who got drunk after just one margarita, two others gave our FOOOINE bespectacled white young waiter such a hard time. Specifying exactly 3 ice cubes in their tea, pickily making adjustments and substitutions to the menu items they wanted, getting exactly what they ordered only to send their dishes back and opt for chicken tenders/fried shrimp and fries instead. And of course, as with most less than ideal restaurant patrons, they're unapologetically less than generous tippers (if they tip at all). But hey, what can you do? That's just how they are, and you gotta love 'em. And I'm sure poor Jay didn't suffer too terribly. One of my cousins tipped him more than properly "just for being sexy". She was even bold enough to write her number on a napkin and hand it to him before we got up to leave. Gurrrrhl. That couldn't be me, but I applaud you! 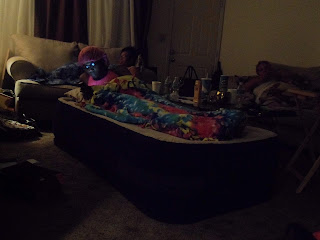 As we left, some of my cousins were in the mood to drink,  so we made a detour at a gas station (it was 11pm and the liquor stores were closed) to pick up some late-night liquids. But you know as soon as we walked in the door and everybody sat down, all of us were too tired to drink anything. All we opened up was a bottle of Smirnoff Ice Screwdriver (vodka+orange juice) and it was as my cousins like to say, "fahr" (lit. fire; bomb; delicious; really good). I avoid drinking alcohol as much as possible, but when I do I prefer the stuff sweet and weak, like that Smirnoff was. A nice end to a slow but fun day!