BOOKS! (The Art of Asking)

Similar to Kevin Breel's Boy Meets Depression, this is another book written by an artist who gained massive attention following their appearance at a TED Conference. Unlike Kevin Breel, however, I had both heard of Amanda Palmer and seen her noteworthy TED Talk "The art of asking" before I'd known that she had a book coming out. That Talk blessed me, and when I found out she had a book coming out with the same title, I was on board! Ma bought a copy for me as a graduation present, and I just recently was able to dig into it.

The Art of Asking by Amanda Palmer 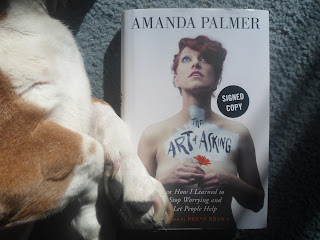 For those who don't know, Amanda Palmer is a rock star known for forging an unusually tight community between her, fellow musicians, and her fans throughout her career. She utilizes her blog, Twitter, and intimate performance settings and fan meetings to do so, believing that it's best to create as few boundaries between her and her audience as possible. Having started as a street performer and then indie musician, Palmer put out one album under a major label before being dropped. Continuing from there as an independent artist again, she reached out to the internet to fund her next album through Kickstarter, and within three weeks she became the first musician to crowdfund $1 million.

From what I can tell Palmer is no stranger to receiving heat and hatred because of her straightforward nature, openness, and unconventional/outlandish way of doing things. But the Kickstarter feat was what really set the Internet ablaze. Media and netizen tongues wagged about how she was an atrocious beggar (how dare you not have a real job and have the gall to ask people for money without presenting a tangible return on investment!), and how she wasn't a real artist (how dare you sell yourself out to the masses online, how dare you beg for money but then not pay all the artists who perform at your shows, how dare you even ask for money when you were once signed to a major label, are married to a rich writer, and should be able to finance the project yourself!). This book is her way of clearing some things up about how the Kickstarter thing all went down, reflecting on her development as an artist and performer, and explaining her perspective on asking and receiving. Thus, The Art of Asking.

Seeing as how this book is more self-help than autobiography, Palmer takes nearly every opportunity she can to relate her experiences back to the conversation of giving and receiving. Though an artist's offering to those who sow into them may not be immediately tangible (or tangible at all), that is not to say that what he/she has to offer is not valuable. So one shouldn't feel ashamed of asking for and accepting help (or money, you name it), especially if they need it to create something. Or even if they need it just to be okay. Substitute "an artist" for "any person", and the idea stands the same.

After having read her story, what I respect most about Palmer is that though she may not always believe in herself, she believes in the power of her art to connect with people. She notes that she may not be the most skilled or highly-trained musician (she often references an "Imposter Syndrome" that she feels at times when she doubts she's worthy of the position that she's in), but she knows that her work still has value. The satisfaction of expressing herself, and seeing how people all over the world are positively moved by her art and are even willing to chip in to help her perform and create it, that's what keeps her going. Even with her doubts and fears, she just can't not create art. And that's phenomenally inspiring to me.

I must say, though, getting through this book felt like a really long experience. Since reading Wendell Pierce's Wind in the Reeds this summer, I've been enthralled with reading about performer's perspectives on their own artistry and the function/necessity of art. So I can't say that I didn't appreciate Amanda Palmer's insight. It was just, I don't know. She seems to be incredibly trusting and needy, which she's not ashamed of and shouldn't be. But the way she tells it, sometimes that came off to me as naive, and other times redundant. Like okay, you trust people more than you should and in extraordinary circumstances, and as a result good things happen for you most of the time. Got it. I was excited to finally read this book and tried to approach it with an open mind. Perhaps my cynicism got in the way of my appreciating her whimsy at times. Eh well. That doesn't take away from the fact that this is a beautiful book! Amanda Palmer's done us all a tremendous favor, and if you have any creative inclinations or have ever felt ashamed about anything, then The Art of Asking is for you.

"I'm often asked 'How can you trust people so much?' Because that's the only way it works. When you accept somebody's offer for help, whether it's in the form of food, crash space, money, or love, you have to trust the help offered. You can't accept things halfway and walk through the door with your guard up" (158).

"But you know. You would say, 'I'm an ARTIST... fuck you, Mom! What do you know?! You're just a computer programmer....' You know, Amanda, it always bothered me. You can't see my art, but... I'm one of the best artists I know. It's just... nobody could ever see the beautiful things I made. Because you couldn't hang them in a gallery" (204).