Hurray! I recently got my hands on my first advanced reading copy/uncorrected proof ever! This is yet another thing that I can chalk up to the perks of working in a bookstore. Most of the ARCS and proofs that come our way look like snoozefests to me, but this one caught my eye with its verging-on-ugly-but-not-quite neon green cover, its relatively short 200-page length, the title's reference to one of my favorite 90s TV shows, and the big "D" word in its title that resonates with me so much. So I figured, what the hey, I'll take a chance! And I'm glad I did.

Boy Meets Depression: Or Life Sucks and Then You Die Live by Kevin Breel
(on sale September 15th, 2015) 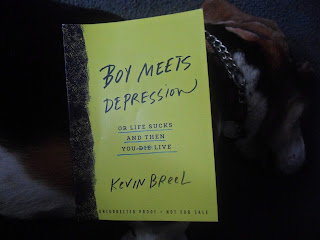 Kevin Breel is a Canadian comic and mental health activist who apparently did a TED Talk in 2013 that brought him a lot of attention. I don't know if this book was already in the works before TED or not,  but it's certainly helped give this project momentum. The back cover quotes some TV personality and author who claims that Breel "has single-handedly demystified depression" through this book. I would disagree for three reasons: 1) Kevin Breel is neither the first nor the only person out there to write about depression as he has done here. 2) In order to declare such a shift in culture, the book would have to have reached a significant amount of people enough to transform thought and discussion about depression, and since the public doesn't have access to this book yet, I don't think such a claim can be made. And 3) Kevin Breel does an excellent job of describing what depression feels like. As someone who also suffers from depression, I can vouch for this based on my own experience. But! Just because Breel's experience has some similarities with mine, doesn't mean that his depression story is altogether representative of mine or anyone else's. So to say he demystifies depression across the board for everybody is a stretch.

But anywhoo, moving on to the book itself. Boy Meets Depression is Breel's account of dealing with depression in his own way. And after having read it, I'm struck by how unremarkable his life is. Now, I don't mean this in a pejorative way. He grew up in suburbia (so did I). His parents had a terrible relationship and got divorced while he was relatively young (so did mine). He was an incredibly awkward and sensitive kid (so was I). But he still had a good group of friends and was decently involved in school (so was I). And his mom may not have understood all that he was going through, but she stuck by him and did her best to help him get through (so did mine). His life is unremarkable in that I'm sure many young people can relate. And I think it's that relatability that makes the depression part less taboo when he finally delves into it. An average guy with a relatively decently life, who's been through some things and has had a hard time accepting himself and processing his hardships. That probably sounds like a lot of people you know, right? That's what makes this book work. It's accessible without dumbing things down too much, which is a useful approach to educating people about not only what a mental illness is, but also how it can manifest in one person's day-to-day life.

Three chapters in particular are required reading, in my opinion. If for whatever reason you want to take the lazy route and get to the meat of what this book has to offer, chapters 4, 7, and 8 will give it to you. Chapter 4 ("High School, Hormones, and Hard-Ons") is about Breel's downward spiral in high school, and the guidance counselor named Mr. York who refuses to give up on him. Breel has a real advocate in his corner, but (*spoiler*) when things get too real, he pushes Mr. York away. I've done that many a time before, even though I knew I needed help. Chapter 7 ("Boy Meets Depression") gives you the ins and outs of what depression is, how depression can make one feel/think/act, Kevin Breel's hitting rock bottom and contemplating suicide, and his decision to keep living. He waxes a little too long on the warped depths that depression can take you to, which was triggering for me and thus made it hard for me to get through this chapter. But otherwise, it's the most accurate description I've read of what I know depression to be like, and though it may not be indicative of all depressed people's experiences, it gives quite the thorough picture. And lastly, Chapter 8 ("Leather Chairs in Sooke") talks about Breel finally taking the plunge and going to therapy, what he got out of his sessions, and how his perceptions of therapy changed as a result. This chapter reminded me a lot of my Sessions with Sue, which I remember fondly.

The book reads a lot like a TED Talk, which is okay in some parts but in others it just kinda makes me nauseous. A few too many cliches, and some lines wreak of trying too hard to sound profound. Some ideas are repetitive, and in certain parts I think he's trying to be funny in a self-deprecating way, but it reads like he's being too hard on himself. Like, Dude! Of course it took you a long time to figure out what matters most in life! It takes everyone a long time! You're only 21, man. Cut yourself some slack! And Dude! Just because you don't have the worst life ever doesn't mean that you have no right to be depressed! While this book may not be a stellar read, it is incredibly honest, helpful, and soooooo necessary. If you or someone you know is interested in learning about how people live with depression everyday, and want something that's accessible (no complex medical or specialized concepts to go over people's heads!), then this is where you start. From the bottom of my heart, I want to thank Kevin Breel for the courage to tell his story. Thank you, sir, for doing your part. God bless you and good luck with the release!


"Sometimes I think of my depression as a fog... In a way, fog is both beautiful and haunting at the same time. It's hard to define, hold, or interact with, and yet it exists. It's there. You can't really clear it away just because you want it to be gone. At the same time, you always know that the fog is just temporary. It's always just rolling through. It will be here for a while and then it will pass. And eventually it will disappear completely and the world as you know it will come back in to plain view, like it never even left. But in the meantime, while it's still hanging in the air as thick as smoke, you can't see life the way you used to see it. The beauty is missing and the perspective is gone. You can only see the six inches in front of your face, and those six inches aren't pretty" (124).