BOOKS! (How to Live in Detroit Without Being a Jackass)

I saw this book on display during one of my last days at the store. I thought the premise was clever and timely, seeing as how lately there's more and more talk about Detroit "making a comeback". And I found the Vernors ginger ale logo design that the cover copies to be fitting, although I'm personally not a fan of the beverage. (Vernors is one of many trademark Detroit/Michigan things, and Foley seems to stan for it. But if you ask me, it's way too sweet and Canada Dry wins over it any day. But I digress.) So I bought it. Aaron Foley was actually scheduled for a signing later that evening at the store, but after an almost 9-hour shift I was ready to seek refuge at home. However, after having read it I kind of wish I'd stayed just to give him a hug and say, "Thank you, sir. People have been needing this book." 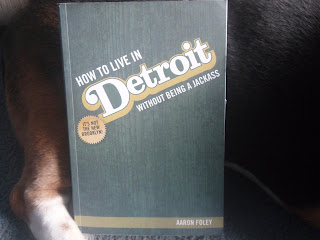 This book is a starting point for new transplants to Detroit and people who haven't yet moved to the city but are considering it. Each chapter offers a different lesson titled "How to _____ in Detroit", and the book even includes black-and-white maps (basic geography of the city, notable landmarks, neighborhoods) and illustrations of well-known local faces and commodities drawn by Haley Suzanne Stone. Foley also lists his recommendations for other reading material, songs, and films to get people more acquainted and informed. For the uninitiated, How to Live in Detroit is mostly informational. For the rest of us, Detroiters or suburban Metro Detroiters like myself, the book is  informative but also gives us a space to laugh and shake our heads as Foley brings up familiar truths (many to be proud of, some not so much) about Detroit history, culture, and current or emerging issues.

Granted, Foley recognizes that every individual's Detroit experience is different, so he can't (and he doesn't) claim to be the ultimate authority on all things Detroit. Born, raised, and now a returned resident of Detroit, he knows his city the way he knows it, and he's just sharing that knowledge in order to prevent newcomers (especially but not exclusively white newcomers) from making crucial mistakes. In some way natives and newcomers alike can all do better. But certain newbie mistakes will cheat transplants out of appreciating what the city has to offer, and will risk creating tensions with or erasing Detroiters who've been there longer than newer residents. The running "don't be a jackass" line is meant to be funny, and Foley does include his profanity and sense of humor in his writing. But he's also on a serious mission to educate readers, admonishing them to love the city for what it is and collaborate to make it greater for all, rather than trying to swoop in and selfishly make it into what they think it should be.

It's probably because I'm from the suburbs and know to stay in my lane, but one of my favorite points of Foley's is the one he makes about how hometown designation works here. In a nutshell, it doesn't matter how close you live to the city or how much time you spend there. If the name of the city in which you live or grew up is spelled or referred to as anything other than D-E-T-R-O-I-T, then you aren't from Detroit. You're from Grosse Pointe. You're from Auburn Hills. You're from Ferndale. You're from Royal Oak. You're from Rochester Hills *shudder*. You're from downriver. But you're not from Detroit. Don't even pretend. Rather than distancing yourself from all the city represents because you think it's beneath you, this is more about not laying claim to something that you're not really part of. It's a matter of accuracy, it's a matter of pride, it's a matter of culture and community, it's a matter of responsibility (you claim Detroit but what do you really know about it? how do you contribute to it?). Just don't do it. Even if you insist on fronting about it, folks will be able to call your bluff.

Lastly, I also greatly appreciate how Foley repeatedly affirms that Detroit is a mostly Black city. Less mature readers might whine about bias, not understanding why Foley harps on Black people and Blackness so much. But, above all, it's a demographic fact due to a particular history of migration, industry, and discrimination that can't be ignored. You can't claim to love Detroit without recognizing and respecting the people who've made (and continue to make) it what it is, and to act like Black people don't play a huge part in that is just willfully ignorant and silly.


"When does 'helping' come off as smug? Easy. When you treat [a] good deed as a favor to the people around you rather than simply as a good deed. You should not expect people to bow down to you because you painted the outside of your house.

White people don't often like to hear this, but since many have been so rewarded all their lives for basic accomplishments they're shocked when they're not recognized for something that most people do every day. Millennial whites can especially insufferable, having grown up in a culture in which everyone gets a trophy just for showing up" (84-85).