The fall 2015 drama season has come to an end in Japan, and these are the shows that I chose this season. In order of what I started watching first: 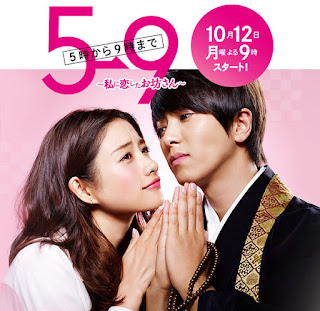 One of many romantic comedies based on manga series, I watched this show for the lead actress, Ishihara Satomi. I first saw her in 2010's 'Hidarime Tantei EYE', and she's been one of my favorite Japanese actresses since. She's got big lips like I do, and she's not just some pretty girl. No matter the role, her characters have personality. They express themselves, and even her more docile characters disagree with others and get loud when they need to. She brings a certain mischievous spunk and strong-willed sense of humor to every character she plays. This show is no different.

As the title notes, '5-ji kara 9-ji made' is about a twenty-something English teacher named Junko (Ishihara Satomi) whose life changes when a Buddhist priest named Takane (Yamashita Tomohisa, also in 'Algernon ni Hanataba wo') falls in love with her at first sight. She has her own career and dreams of moving to New York, but Takane inserts himself into every part of her life, following her around, hanging around her workplace, making himself at home at her parents house, and even holding her hostage for a night at his temple. Behavior that would get you arrested, socked in the jaw, or kicked in the pants in real life stateside, but is apparently endearing and demonstrates the deepness of your love in J-dramaland. Especially when Takane's always close by to swoop in whenever Junko's having a tough time. In short, Takane's the best but he's also the absolute worst, because he's always getting in her way. At first. Gradually they meet in the middle. Junko gets him to slow down and start off as friends first, while she learns the ins-and-out of running his family's prestigious temple.

Since much of the show is set at Junko's English conversation school, a lot of dialogue between the Japanese characters is in English. Which is actually super cute because some of them speak English surprisingly well! The two stars and a certain character named "Arthur" (Hayami Mokomichi, also one of the male leads in  '37.5°C no Namida') greatly impressed me in particular. Plus one of the actors playing a teacher is a black girl with a majestic fro, which I appreciate even though she has no speaking parts. Other than the final episode, which was the corniest and sappiest of them all,  '5-ji kara 9-ji made' is a cute drama about love, following your dreams, and modern pretty working 20-somethings. Something light and fun to watch that I'd recommend to anyone! 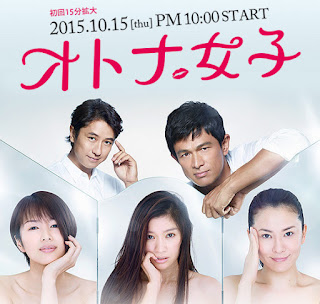 This one I watched for the theme song, "Nando demo" by Crystal Kay. Been a fan of hers since 2007 and I just have to support whatever she's a part of! 'Otona Joshi' stars Shinohara Ryoko as Aki, a successful mobile game app developer with a less less-than-stellar love life. Not only does she have to deal with a loser musician boyfriend, she also has to take crap about how old and undesirable she is from co-workers. If the crap isn't coming from her younger subordinates who talk behind her back, it comes from Takayama (Eguchi Yosuke), a cynical scriptwriter and novelist commissioned to help write the team's new role-playing romance game app, who believes life is basically over for women once they hit age 25. To stay strong, Aki laughs and commiserates with her two best friends who are also women in their 40s. One, Midori, is a single mom of three nearly grown boys who has no thoughts of love until her youngest son's 20-something-year old teacher is smitten with her. The other, Moeko, is a florist who begins dating Aki's boss, a smooth guy with a playboy reputation she isn't yet aware of.

As I understand it, once women get past a certain age in Japan, they're often not treated like "women" anymore. They became obasan ("aunties"), just one rung above obaasan ("grandma") old lady status. In some people's eyes this takes effect as early as 25, but in one's 40s, it's like women are especially undesirable and invisible. Aki just can't catch a break as men use her age as a reason to drop her or take advantage of her. At one point she is almost raped, and when she fights the scumbag off, he has the audacity to argue that she's not in a position to be rejecting anyone's advances at her age (read: you should be glad I'm trying to rape you, because you're so old that no one would give you any play anyway). And the woman. is only. 40. years. old. This is some sick and twisted mess, y'all. 'Otona Joshi' opens with the line that even women in their 40s are still feminine and want to find love and happiness, and that instead of being counted out as obasan, they should rather be called otona joshi (adult girls/grown girls/grown women). The show argues for the enduring value of 40-something women by showing how they can still be appealing to men, which is tired and limiting to me. But, on the other hand, love and engaging in healthy relationships are the explicit focus of the show, so I can get with it. 'Otona Joshi' is another romantic comedy, but one that's less about cuteness than it is about scratching the surface of how women are unfairly devalued in society. Watch if you want something light that's a little more realistic than '5-ji kara 9-ji made'. 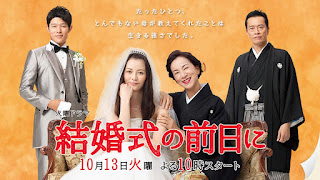 This one I watched for the lead actress, Karina. She tends to play more unconventional, tomboy-ish, "strong" female characters. Not sure if it's because of her height or atypical look, or if it's just her preference. But as a potentially-dying woman named Hitomi, 'Kekkonshiki no Zenjitsu ni' showcases Karina in a role that's not necessarily more feminine or girly, but softer and with more emotional range. Hitomi is a real estate development designer who was raised by her single father and her aunt. All three
live in the same house above her father's restaurant in the soon to be former location of the Tsukiji Market. Hitomi is also engaged to tall and handsome doctor who comes from a long line of physicians. Her career is picking up speed and plans for the wedding are going well.... until Hitomi learns that she has an inoperable brain tumor. And then her estranged mother Kanako (Harada Mieko) re-enters her life after having left the family when Hitomi was three years old. Now Hitomi has to figure out how to break the news of her illness to the people in her life, decide whether or not to accept her mother, and choose whether or not to continue with the engagement, all while coming to terms with what seems to be a death sentence.

This show is slightly slower than the other two mentioned in this post, but it has the most heart. What I found most refreshing about it is how uncharacteristically supportive the other characters are when Hitomi's having these crises. This is not a typical tragic cancer story or otherwise down-on-one's-luck story where people desert a character in need. Instead, this is a story about an ailing woman whose community rises to the occasion and comes through for her. Hitomi's fiancé isn't confident that he can stay by her side through her illness, his overbearing mom keeps pressuring him to dump her, and he'll have to give up an amazing opportunity abroad if he stays with her. And you know what he does? He voices all his concerns to her, but he still stays! Kanako made a horribly selfish decision when she abandoned Hitomi, but once she learns about how sick her daughter is, you know what she does? She does everything within her power to help Hitomi remain positive, live fully, and not give up. 'Kekkonshiki' emphasizes the importance of having a support system around you, and overcoming your pride enough to actually let those people help and guide you when you need them.

Having not had high hopes for any one of these dramas (the synopses didn't sell me too much, but I decided to take a chance), I'm glad say that I enjoyed each of these dramas to an equal extent. As such I have no top pick! '5-ji kara 9-ji made' was funny and fun to watch, 'Otona Joshi' had the freshest concept and most relevant hot topic, and 'Kekkonshiki' was a humbling family story that moved me the most. Watch all of them if you can!
Posted by Deela (Danielle G.) at 8:22 PM