This book caught my eye while I was at work. I decided to buy it because I read the synopsis and learned that it was written by a Vietnam-born author who lives in Quebec and writes exclusively in French. Gotta represent for la francophonie around the world!  Plus, I find that I'm frequently drawn to immigrant stories when I read literature. I don't mean "immigrant stories" to be reductive, but rather to note that stories such as Fresh Off the Boat, Americanah, The Spirit Stills the Storms, Small Island, Breath, Eyes, Memory, The Woman Warrior, The Namesake, and White Teeth, are all grounded in the endeavors of a person or group of people separated from their place of origin and making a life for themselves elsewhere. Mãn is up there with the rest of them, and the book is unassuming but draws you in so beautifully. Now I really want to get a copy of the original French version so I can get a stronger feel for Kim Thúy's voice. 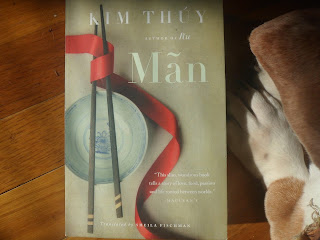 From the start, Mãn appears to be without a solid sense of origin or belonging. The novel opens with Mãn reflecting on her three mothers in Vietnam. There's the woman who gave birth to her, a ghost of a young woman who abandons her in a vegetable garden. There's a second mother, the recluse who found her there. And then there's Maman, the woman who raises Mãn, arranges a marriage that takes her to Montreal, and eventually immigrates to complete the family and be a grandmother to Mãn's children. In Montreal, Mãn's life is confined to the kitchen of her husband's Vietnamese restaurant, and the apartment above it in which they live. Without companions in this new city, she conjures up the sensations of Vietnam through her dishes, and the authenticity and exquisite quality of her food garner the restaurant popularity, as well as well-connected friends who help transform the place into a hip "culinary workshop". In this way, Mãn earns a measure of renown as a chef, and it is through traveling to France to do workshops and promote a cookbook that she meets and falls in love with Luc, whose family has a personal connection to the old French colony of "Indochina". It is through this love that Mãn is awakened to who she is as an individual and what she desires in life.

Early in the novel, Mãn references Une vie by Guy de Maupassant as one of the works of forbidden French literature that Maman made her read in Vietnam. She draws an important connection between herself and Une vie's main character, Jeanne, a sheltered rich girl who goes straight from her schooling at a convent to marrying a man her father has chosen. In the beginning she is young, naive, and dreams of romance and adventure. But poor Jeanne never has a chance, and she grows into a lonely and perpetually disappointed woman who can never fully express how unhappy she is because no one cares. Mãn, on the other hand, has no expectations until her affair with Luc. Because of her Western looks (it is hinted that her father was a Frenchman, and her light skin and rosy lips are rare yet highly sought-after signs of beauty in Vietnam), Mãn is made to think she's already set for life. Her name even means "may there be nothing left to desire", and thus she contrasts herself with Jeanne, saying, "I can ask for nothing more because my name imposes on me that state of satisfaction and satiety. Unlike Jeanne... I grew up without dreams" (27-8). Though Mãn and Jeanne differ on how much they expect out of life, their ends are similar. Mãn knows that the profound love she has found is transitory in nature. And so, like Jeanne, she has to find a way to continue living life without the one thing that she wants most.

One could easily read this entire novel in a day, but I would caution you not to rush through Mãn. Each chapter or passage is one to three pages, denoted in the margins with a Vietnamese word that represents the situation at hand, followed by its English or French translation. Thus the reader is constantly reminded that Mãn's particular immigrant experience is informed by language and memory. Oh, and food of course! Kim Thúy's writing is evocative yet very subtle, and this novel is relatively short, so I recommend taking your time with it!


"...and until now the most surprising had to do with the French word rebelle, which I though was a derivative of belle: to be belle again, because beauty is acquired and then lost. Maman often told me that in case of conflict, it's better to hold back than to insult someone, even if that person is the one at fault. If we taint the other, we soil our mouth, because we must first fill it with anger, blood, venom. Starting then, we are no longer beautiful. I thought that the re in the word rebelle opened the possibility of a redemption, the one that would let us regain our beauty from before" (86).

"It was the obvious as well that had made me feel entitled to place my lips in the hollow of his collarbones and to elect it as my resting place. For the first time I felt the urge to plant my flag in that square centimetre and to declare it mine, whereas Maman and I had left so many places without even glancing behind us" (118).