Today was such a great day! The sun finally came out again, and I went to a college summer festival! 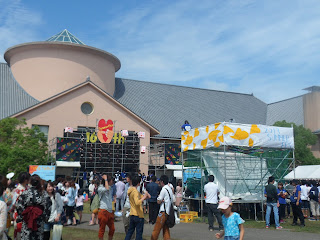 I know I said I was going to a performance at Hikone Castle today, but when I found out that some of the girls were going to Shiga Kenritsu Daigaku/University of Shiga Prefecture's summer festival instead I changed my mind. I see the castle everyday; I can just go there some other time.

Once everyone was ready to go, we biked 40 minutes along the lake to USP's 16th Summer Fes! It was a pretty ordinary festival, to be honest. But the beautiful campus, bright colors, and good vibes made for a really enjoyable experience. Many female students were wearing 浴衣 (yukata/summer kimono) for this occasion. The festival was spread out over a large stretch of the campus, but the food stalls and performances were in the school's courtyard. There were two performance areas there: a stage for large acts and games, and an open area for smaller acts that
overlooked a river. 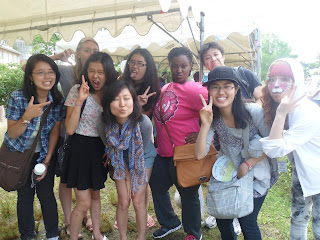 Speaking of performances... suprise! I've uploaded SEVEN videos for y'all today! The first 5 are performances from USP's big band club, and the 6th is from K'crew dance club. Just CLICK HERE to see the first one and access the others! I would've gotten more of K'crew's performance, but they took too long to prepare for their next number and we didn't feel like waiting, so we walked around the rest of the festival.

Along the way we ran into familiar faces, including a couple fellow JCMU students and some Japanese students we'd met at Kumakuma and other local events. We even met a few other study abroad students from Michigan who we didn't even know were here! One of those study abroad students was a black guy, which officially makes 4 of us in Hikone according to my count. 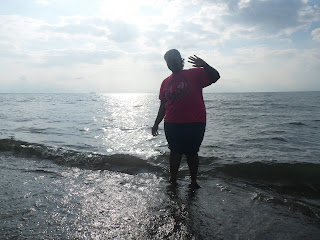 After staying for a few hours and seeing all we wanted to see, we headed back to JCMU. I ended up coming back with James and Jiao, the fellow students we ran into at the festival. On the way back the three of us stopped to play around at the edge of Lake Biwa. The 7th video I've uploaded is of that excursion. I even stepped in and got my feet wet a little bit! You don't get to see that part though, haha.

All in all today was another Saturday well spent, if you ask me.