July said she got places to be, and she ain't have time for us. So here I am already at the end of another month, writing a new book review. There's no rhyme or reason to me pairing the following novels together, other than they're the two books that I've most recently finished reading. Now that I think about it, both do involve 30-somethings catching their lovers cheating and driving across multiple states to escape the drama and the hurt, and both were also written by Black authors who are currently based in Brooklyn, but those commonalities didn't occur to me before. First up, a novel about generations of Black/Native women rooted in Georgia from 1836 through the mid 1990s, as told by a descendant who writes about them while road tripping to a family reunion with her estranged mother. And then, a novel about love woes, work woes, gentrification, and friendship between three gay Black men in Detroit (their hometown).
Nowhere Is a Place by Bernice L. McFadden 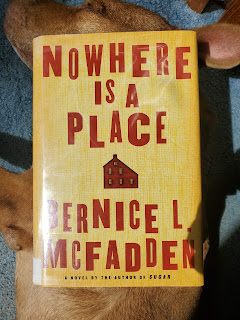 For brevity's sake, I'll just hone in on two additional motifs that stood out to me: spirits, and the color blue. For starters, Lou is the granddaughter of a Yamasee medicine man, the spiritual leader of their village. As an enslaved woman, she's haunted by the disgruntled spirit of the son she mercy-killed for the rest of her life, developing a cancer that swells her stomach and requires her to symbolically give birth to it on her death bed, with an "ocean" surging out from inside her as she dies. Suce regularly talks to spirits and/or herself, is similarly haunted by one of her dead children who resents dying so young, and is able to sense when something's wrong with any one of her 12 living children. And as previously alluded to, Lillie's spirit possesses her daughter Lovey's body in order to enact succubus-style revenge against her brother (Lovey's uncle). Apparently, the spirits in the Black Lessing family are rarely at rest. And the color of that restlessness is blue. Blue is the color of the eagle-shaped granite charm that Lou's grandfather gives her as a child and that gets passed down to her female descendants, and it's also the color of the water she expels upon her death. Blue is the color of the eyeshadow Lillie wears to offset her red outfits, and the color of the moonlight that her spirit is bathed in when Lovey encounters her. Blue is the color that Dumpling avoids for the rest of her life after being traumatized in her preteen years, to the point of never wearing the color again and refusing to dress her dolls or her children in it. And blue is the color of the beaded necklace that six-year-old Sherry is wearing when Dumpling slaps her. There's also something to be said about the recurrence of the number 12—the age Suce is when she meets Willie, the number of years Suce is cursed by another enslaved woman to not have children after marrying Willie, the number of Suce's children who survive into adulthood, the age that Lovey and Dumpling are when their respective innocence is compromised, etc.—but I figure I've expounded enough for one day.

When I started reading Nowhere Is a Place, I expected to read about a mother and daughter settling their decades-long beef (as described by the inner jacket), and granted, Sherry and Dumpling do have a breakthrough in the end. However, I didn't expect that I'd actually be reading a story about the multi-generational impacts of slavery. And that story spoke so much to this present moment in 2022—with legal attacks on women's bodily autonomy, and Black elders' warnings of us being "one vote away from the auction block" proving to be more than mere paranoia as many conservatives try to repeal rights and recreate bondage wherever possible—that I was stunned. As gruesome as the details of NIAP sometimes are, I'm grateful to have read it because it reminded me that I and other Black people of today (especially Black women) are not alone in our suffering. We are not the first to feel like hostages in the country of our birth, not the first to question why we're even here or wonder when things will get better without regressing. Although that reminder doesn't necessarily make me feel better about what's going on right now, it does make me appreciate the opportunity this work of fiction provides to acknowledge our ancestors' suffering, and to honor the joy that they snatched in the midst of it all. I finished NIAP wanting to cry for them, and I don't remember feeling this spiritually connected to a novel since Homegoing. NIAP is easily my second favorite read of the year (so far), after Seven Days in June. If you've ever experienced a Black family reunion, been interested in road trips, valued the importance of "knowing someone's heart", had tension with an older relative who doesn't remember your childhood the way you do, or wanted an example of Black people taking their reparations while neither waiting for over a century nor settling for white hand-me-downs, then read this book!
Favorite quotes:
"i was torn from my somewhere and brought to this nowhere place
i felt alone in this land that was nowhere from my everywhere.
[...] time flowed on like the river
like the river, time flowed on, but i held tight to the memories of my
someplace, refusing to believe that my everywhere had always been
here in this nowhere place." (Epigraph).
"They didn't want to light kerosene lamps for light or go to church every Sunday, 'cause, shit, even the Lord rested on that day, so who was watching and listening while they sweat like pigs in the summer and froze like the ground in the winter all the while singing his praises?" (226).
"Soon? What the hell could she connect that to? Nothing more than an answer to myriad questions [...] Soon didn't mean shit. But she kept the notes anyway, just in case one day it could" (272).
Boys Come First by Aaron Foley 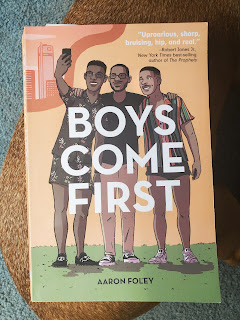 "That was the first time, on the Lord's Day, when someone who wasn't blood-related to Dominick had told him they loved him.
And now, as he tried futilely to fall asleep alone in his teenage bedroom, he wondered if anyone else ever would" (17).
"The tactics were simple: scare the new white people in any way possible. If they wanted to be in Detroit, they would have to accept it all" (134).
"'I'm still all here,' she said, pointing a red fingernail to the right side of her temple. 'Some folks don't even know they're here'" (230).