BOOKS! (Song of the Exile)

I feel like God really wanted me to read this book, because the timing was just too eerie. Back in October I spotted it while doing recovery in the used section of the bookstore I used to work at, and decided that if that book was still shelved in the same place when I came in for my shift the next day, I would buy it. Which I did. I read it in December, and was so focused on its Hawaii/young wartime lovers plot line that I felt hit in the face when I realized that the book is actually about the sufferings and invisibility of comfort women. I'd learned about comfort women in college in a Korean history course and revisited the atrocity briefly in a Japanese lit course, but this book puts all of it in your face. Repeatedly, relentlessly. I finished it on Christmas, and a few days later, bam! The news hit about the sham deal between Japan and Korea regarding comfort women. (I encourage you to look it up, but basically Japan gives South Korea a paltry $8.3 million-dollar donation─not reparations, mind you─ to "support" the surviving women who were forced into sex slavery by the Imperial Army during WW2. In exchange, South Korea must remove the memorial statue that faces the Japanese Embassy in Seoul and never bring up comfort women in official discussions again, so Japan never has to own up to it or feel bad about it. An utter. and complete. sham. It's insulting.) Anywho. I was like dang, I literally just spent days reading about this! And these women continue to be treated like afterthoughts.

Song of the Exile by Kiana Davenport 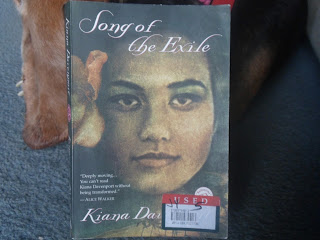 A tale of young island love, becomes an epic wartime love story, becomes a nightmare. Kiana Davenport has done impeccable research on the worst of the worst that happened during WW2 (something few want to acknowledge or address), as experienced particularly by brown and Asian people (people who are rarely mentioned with dignity in American conversations about contributions and sacrifices during WW2). Which means that you might want to take this book in small doses. Books move me deeply but very rarely induce physical reactions in me. I've never cried reading a book, never gotten sick to my stomach. But with Song of the Exile came frequently necessary breaks because what was printed on the pages would become too much for me.

The novel is anchored by two young and devoted lovers named Keo and Sunny. Keo finds his calling as a jazz musician and leaves their home island of Honolulu to follow his dream to New Orleans, later ending up in Paris. His girlfriend, a Korean-Hawaiian college student and painter named Sunny, follows him to Paris in 1939 as WW2 is starting. Under German occupation Sunny slips off to Shanghai to find her long-lost older sister. Keo follows her and eventually finds her, but then loses her when Japanese forces take over the city. He ends up in a prison camp elsewhere in China while Sunny is seized and taken to Rabaul as one of hundreds of thousands of sex slaves ("comfort women"/"P-girls") who are starved, tortured, abused, raped, reduced to their bodies, and murdered by the Japanese Empire's armed forces across East Asia and the Pacific Islands. Keo is liberated and taken back to Hawaii in 1943 and spends the next decade traveling the world, playing the trumpet and searching for Sunny. Meanwhile in Honolulu, Keo's family and neighbors survive the pressures of the stringent post-Pearl Harbor U.S. military occupation only to face another fight as islanders fiercely debate an impending vote on statehood for Hawaii.

The Hawaiian woman on the cover and the synopsis on the back make the novel appear to be about Sunny. But then it seems not to be, since most of the novel is comprised of Keo's story from Keo's perspective. And then you realize that this book in fact is about Sunny, because long after the end of the war Keo and his family are haunted by her absence. An absence that embodies the way in which comfort women continue to be made invisible. Their experiences are questioned and dismissed, they aren't respected as fighters like male soldiers have been, and they are often shamed for enduring all that they were forced into, rather than being honored and shown compassion for having survived. This book is a love letter to the island that raised Kiana Davenport, but is also a mournful tribute to the women who were forgotten and given no peace.

Exile comes to mean many things in this novel, especially if you think of exile as a perpetual separation or a prolonged distance. It can refer to native Hawaiians having their culture destroyed or watered down by colonization and tourism. It can refer to the devotion that jazz requires, as Keo isolates himself from others while on a quest to overcome his greatest fear of being mediocre. It can refer to the displacement of millions during the war, or the type of suffering that unmakes a person leaving them to return home never quite the same. It can refer to Keo and Sunny both separated far away from home, away from each other, away from who they used to be. The title's "song of the exile" is jazz, a music of wanderers like Keo who are constantly searching for truth, excellence, and belonging. It is also the ocean, the divine mother whose scent and waves always beckon her children back home to Hawaii.

I looked up Kiana Davenport and learned that this book is actually the second of her "Native Hawaiian" trilogy. I am so impressed by and enamored with the poetic fluidity of her prose... but Lawd. Song of the Exile has really had me going through it. If the others are anything like it, I might need to wait a couple months before trying them. This book is beautiful  and enlightening and heavy.  So, so devastatingly heavy. I highly recommend it to anyone interested in learning about Hawaii pre-statehood or about the horrors that civilians of color suffered during WW2. However, if you're the type of person who feels things deeply, please take your time and be careful.


"Healing hands of the mothers of her mother, ancient mele chanters and tale weavers chorusing in Mother Tongue. They will gently bathe her, soothing her bones. They will rinse her hollows. Swaying on the ocean floor, they will turn, passing her nightmares from hand to hand like heirlooms. Her pain will be made bearable; they will bear it with her.

Listening closely in those dreams, she will hear her mother's mother and that woman's mother, chant out how Sunny Sung became a woman, how she exacted ho'opa'i, revenge. And broken girls, that army of women in her blood, will rise beside the elders. In nights of sleeplessness, they will keep watch, turning the darkness womanful" (354).