Another advanced reader copy taken from the bookstore break room. I usually don't read scientific books of any sort, but I was intrigued by this one's title and premise. The power of the mind to heal the body is currently a very trendy topic, so this book will be right up the alley of many people who already believe in this phenomenon. However, this idea is also met with much skepticism among doctors and scientists who doubt the efficacy of alternative medicine. What makes Cure different from many mind-body/self-transformation texts, however, is that it takes a scientist's approach to explore whether there is evidence to substantiate the use of the mind in medical practice.

Cure: A Journey into the Science of Mind Over Body by Jo Marchant
(on sale January 19th, 2016) 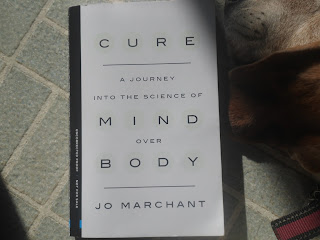 The new age-y title is likely to entice and intrigue many as it did me, but please don't get too excited. What Marchant presents is radical, but not that radical. She doesn't argue that we can think ourselves well (the idea that positive thinking can cure diseases is not a theory that she can support neither as a doctor nor as a scientist). What she does argue, however, is that by using practices meant to influence the mind in conjunction with more conventional treatments, our brains can play a major role in mitigating and relieving symptoms. This in turn can lessen the suffering and anxiety associated with conditions that are difficult or unresponsive to conventional treatment alone. And potentially, these relief methods could put us on the path to developing more efficient and patient-centric medical practices. In short, incorporating the multi-faceted abilities of the mind more into treatment can't be said to cure diseases all on its own, put it could get us going in the right direction.

Jo Marchant, an accomplished British geneticist and science journalist herself, drew upon many sources to conduct her research. She interviews patients and participants, and she consults or observes the work of doctors, researchers, specialists, and practitioners in the UK, US, Italy, Switzerland, France, Costa Rico, Russia and Canada. Just as the sources of her material vary by geographical location, the studies that she presents concern various phenomena and experiments. For example, the placebo effect, the brain's manipulation of fatigue, hypnotherapy being used to relieve debilitating IBS symptoms, virtual reality games and other forms of distraction being used achieve pain relief for burn victims, the merits of consistent one-to-one support and comforting speech provided by caregivers, as well as others. Readers are led to envision the possibility that the mind can be used to enhance treatment for a myriad of physical and mental conditions.

Marchant uses the first half of the book to set a foundational understanding of the ways in which the mind and body work together (both proven and not-yet-proven), and the second half of the book to apply that understanding to everyday life. Three particular chapters in this second half got me thinking. In Chapter 8, "Fight or Flight: Thoughts That Kill", she argues that societal and environmental conditions can affect our biology in such a way that certain populations (in her example, poor Black communities) are being set up to exhibit chronic stress, unhealthy behaviors, and fear mindsets that endure through adulthood. Chapter 10, "Fountain of Youth: The Secret Power of Friends", is all about longevity and loneliness; since social bonds have been found to reduce stress, Marchant explains how friendship can keep us alive. She saves what may be the hottest of hot button issues for last in Chapter 12, "Looking for God: The Real Miracle of Lourdes", using a popular Catholic pilgrimage site in France as the framework to explore how belief in God might be said to improve physical health and healing.

Ultimately, Marchant admits that this field still needs a lot of research, as there's so much about our brains especially that we still don't understand. At the same time, she repeatedly emphasizes the point that while numbers and quantitative results are important, how patients feel─not just physical sensations but also their psychological state and how they experience their illnesses─is also crucial, and should be taken into account when treating them. Because, as she writes, patients aren't just bodies and certainly aren't machines. They are complex human beings. They're people! Cure is a slightly challenging but incredibly informative read that will be useful to scientists and non-scientists alike.


"It turns out that experiences of social exclusion or rejection─such as being shunned in a game, receiving negative social feedback, or viewing images of deceased loved ones─activate exactly the same regions of the brain as when we are in physical pain. When we're socially rejected or isolated, we don't just feel sad. We feel injured and under threat" (181).

"The evidence shows something very different: that our bodies and minds have evolved in exquisite harmony, so perfectly integrated that it is impossible to consider one without the other. Terms like 'mind-body' and 'holistic' are often derided as flaky and unscientific, but in fact it's the idea of a mind distinct from the body, an ephemeral entity that floats somewhere in the skull like a spirit or soul, that makes no scientific sense" (255).