BOOKS! (Narrative of the Life of Henry Box Brown)

This book is very special to me because I'd learned about the man who mailed himself north to freedom in elementary or middle school, but had no idea that he'd written about it afterward. This book is doubly special to me because I was able to buy it and the next book that I'm going to review for a grand total of $2.91 at a calendar store. The cheapskate and the bookworm in me are both insanely pleased right now.

In a nutshell, Henry Box Brown's story goes like this: In Virginia, Brown and his wife had different masters, but he often did additional work for his wife's master and gave the scoundrel money because said scoundrel had the power over him to demand such things. When Brown wasn't able to meet his demands, one day he came back from work to find his wife and children gone. They had been sold further south by his wife's master. Greatly distraught, weary, and rightfully enraged, he had finally had enough of the tyranny of slavery. And in March 1849, with the help of a couple trustworthy associates, he risked death to have himself sealed in a box and mailed from Richmond, VA to Philadelphia, PA. This memoir is part of his later work as an abolitionist speaker, actor, and storyteller. 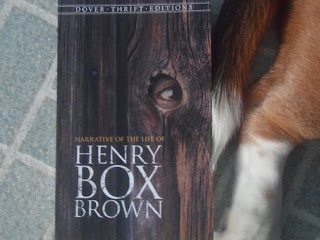 At only about 60 pages, this book is one of numerous precious testimonial slave narratives that we have access to today. Henry Box Brown employs it as a means to tell his story, as well as to offer some theories about the treatment and conditioning of black people that are strikingly relevant to the current BLM/New Civil Rights Movement. For instance, early in the book Brown discusses the nominal quality of black marriages and a particular lack of autonomy for black female bodies. Sexual agency does not exist for black women, and he makes clear that a slavemaster's right to a female slave's body supercedes that of her husband's. He then boldly supposes that one of the strongest motives for even the most "respectable" men to own slaves is sexual: white men keep slaves in order to have unlimited access to rape as many black women as possible, and then profit off of their mixed offspring as an afterthought. The devaluing of black women is nothing new, and on top of that, it's profitable.

In another instance, Brown draws from his  childhood to demonstrate how slave children are brainwashed to think that their innate purpose lies in subservience. Brown and other little ones on the plantation mistakenly believe that their master is God and that the master's son is Jesus. Said master and son are amused by this superstition of theirs, and encourage it. On other plantations masters might even sit amongst slave children to teach them the word, but won't allow them to read the word themselves─or even touch the Bible! Fortunately for Brown, he stops believing that his masters are divine when his mother corrects him with her own instruction, emphasizing that he know Christ for himself. His family is able to teach and empower him at home; many other black children are not so lucky.

Speaking of Christianity, Brown is very open about having been conflicted about the religion. As a black man who was controlled and taken advantage of by white people who wielded a warped, disingenuous piety against him, this isn't a surprise. Nearly all of the people who own him or use their power to mistreat him and other slaves are white, so-called good Christian people. A slave-owning Christian extorts money from him for years, then sells his wife and children away. And surrounding slave-owning Christians whom Brown has grown to know and trust are deaf to his pleas to help him get his family back. So, understandably, he's got beef! Brown writes that he could've very well been bitter and ended up hating Christianity, but he instead embraces it because he's learned that the faith is really about love and freedom for all. Neither he nor his narrative are anti-Christian, but he acknowledges how other black people might turn out to be so.

Something that's also salient for the Movement today is the frequent economic manipulation that slaves were subject to at the hands of their owners or overseers. To counter centuries-long assumptions of our people's inert laziness, we often try to remind ourselves of the power of the black dollar. And I think the beginnings of this sentiment can be gleaned from Brown's stories of slaves lending or giving masters money based on negotiations that go unhonored. With promises of freedom, of not having loved ones sold off, or of receiving their own facilities as incentives, slaves would work to save all the money they had to meet their masters' exorbitant demands. And in return, they'd be tricked into diverting their funds to other purposes, placated into compliance just long enough to forget about running away, or flat-out swindled out of their money by masters who'd never had any intention of conceding to the terms agreed upon in the first place.

With all the points Henry Box Brown brings up (and there are more), he ties them all back to the reality that generally, white people didn't have qualms about owning people because we were not people to them. This isn't news to me, but reading it the way he tells it makes it difficult to swallow because I see the same anti-black sentiments expressed in 2016, especially in response to continued calls for justice, equality, and humane treatment. Many a time Brown overhears slaveowners and other white people saying that blacks "don't have souls" or "don't have feelings" to justify their own depravity. Such depravity, along with many things good and bad, is sown into the fabric of this country. I think Henry Box Brown wrote this narrative to ensure that Americans not only don't forget this fact, but that we do what we can to resist and correct it. His journey to freedom is astounding, but what he has to say about it is even more so.


"For I feel convinced that enough has not been written, enough has not been said, enough has not been done, while nearly four millions of human beings, possessing immortal souls, are, in chains, dragging out their existence in the southern states... Having, myself, been in that same position, but by the blessing of God having been enabled to snap my chains and escape to a land of liberty─I owe it as a sacred duty to the cause of humanity, that I should devote my life to the redemption of my fellow men" (1).

"The advocates of slavery will sometimes tell us, that the slave is in better circumstances than he would be in a state of freedom, because he has a master to provide for him when he is sick, but... no amount of kindness can be made the lawful price of any man's liberty, to infringe which is contrary to the laws of humanity and the decrees of God" (29).