Like in Bridge of Spies, in this film a man is hired to uphold an oath and do his job, and people ridicule him and call him un-American for doing. his. fricken. job. Said man chooses to adhere to professional standard and human decency rather than to mob mentality, and the consequences are more than he bargains for.


Nigerian-born Dr. Bennet Omalu's life changes when he's assigned to do an autopsy on the body of Mike Webster, a former Pittsburgh Steeler's star and the city's hometown hero. Dr. Omalu finds that repeated head trauma contributed to Webster's mental demise and death, which leads him and his colleagues to put a name to a new degenerative disorder that other football players might also be in danger of developing, chronic traumatic encephalopathy (CTE). When his findings are published, the NFL endeavors fiercely to shut Dr. Omalu up and keep the truth buried.

"Even Legends Need a Hero / Nothing Hits Harder Than the Truth" 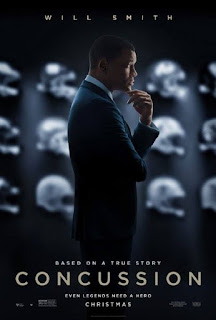 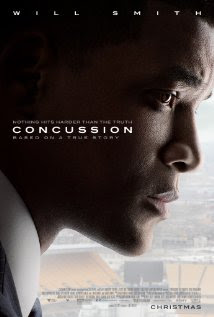 What I really like about this film: The very first scene with Dr. Omalu (Will Smith), where he's testifying in court for a murder case and the judge skeptically asks him, "Do you have a medical degree?". In response, Dr. Omalu calmly recites all the receipts from his studies, doctorate, multiple masters degrees, and specializations acquired from prestigious institutions on at least three continents, just so everyone in the room knows 1) not to try him like that again, and 2) that they could never even aspire to his level of excellence.

Gugu Mbatha-Raw as Prema, Dr. Omalu's wife. She impressed me in Beyond the Lights and she impresses me still.

I must mention that I greatly appreciated the way in which Omalu and his wife's faith was emphasized. It wasn't done in a corny or dogmatic way, but in a way that speaks to belief in oneself and one's purpose. I know God, and knowing God means trusting His vision. And knowing God means that when I have truth, I must tell it, even if people tell me not to. I think that's a message that can resonate with many people.

I'm also glad the film clarifies that even though Dr. Omalu  initially doesn't get what the big deal is about American football, he isn't out to take down the sport with his findings. He just wants people, and athletes especially, to be made sufficiently aware of potential risks involved with playing the sport.

What I don't like about the film: Prema is kind of just there. She has a past and desires, she has endured trauma, but these things are only mentioned in passing. As a character and the female lead, she exists only to be Dr. Omalu's companion and cheerleader, which is a waste in my opinion.

When Dr. Omalu gets invited to Capitol Hill and is offered the position of chief medical examiner for Washington, D.C., and the recruiter tells him that he represents every bit of what it means to be American because of what he's done, and that he's reached a new level in his profession now, and that they welcome him aboard.... As if he's reached the Promised Land or the Pearly Gates or something, and all of his life's work and hardships are only fully validated by a white man in a suit telling him, "Well done". I appreciate the sentiment that he is finally being recognized for his integrity and brilliance after fans, the NFL, and the Feds did him dirty for so long. And the scene doesn't even go beyond five minutes. But the way this moment of triumph is set up just rubs me the wrong way.

Lastly, this isn't a criticism of the film itself, but a reaction to a note made at the end of the film. Apparently, back in 2013 the NFL settled a lawsuit filed by 5,000 former players, on the condition that the organization would never have to reveal how much and when they know about the harmful effects of football-related head trauma. Which means the NFL knows A LOT more than anyone about something that could be killing athletes. And they. will never. tell. Ever.

Would I recommend it?: Sure. Like Creed, this is a sports film that isn't just about sports, so it has enough in it to keep it interesting for non-enthusiasts such as myself.
Posted by Deela (Danielle G.) at 5:49 PM