Food and Exploring and More Food and People!

Bad news: I'm still pretty tired and speaking like a timid idiot. Good news: I slept until 6am today, I've eaten more today than I have any other day this week, AND I actually did a little exploring!

Today's classes were much better because a fellow student decided to move up to Level 4 with me, so I'm no longer the only one! I'm still struggling but I just have to believe that I'll improve. 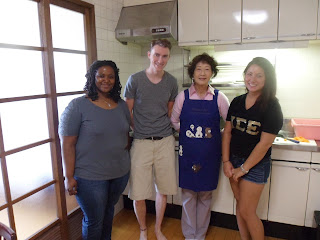 Classes end at noon on Fridays, and at 12:30pm we had a cooking lesson scheduled. We were put into groups, and each group had a Japanese housewife there to show us how to cook some simple Japanese dishes. Our teacher was a woman named Junko, who was extremely kind and spoke English really well. She showed us how to make 焼きそば/yakisoba, ほうれん草の胡麻和え/hourensou no goma ae (spinach and sesame seed salad), and miso soup. We had a lovely conversation over an even lovelier meal, and as she left Junko-san actually gave us some books to help us with our Japanese! 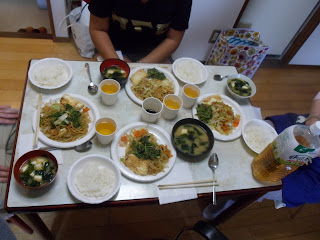 Following that, after 4 days here I finally ventured outside to go somewhere other than the grocery store! I tagged along with two fellow students, and even though we only went to a book store and another market (ピアゴ/Piago), I was glad just to be out there. 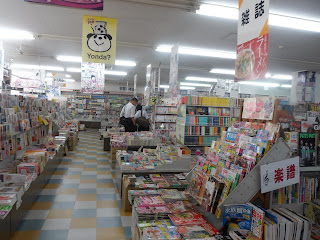 We came back to JCMU just in time for a welcome party with students from Shiga Daigaku! I'll be honest, I was too worn out to make a concerted effort and talk to many people there, much less have decent conversations in Japanese. I pretty much got myself some food, moved around very little, and spoke whenever someone else spoke to me. I know that it wasn't very conducive to meeting new people and improving my speaking skills, but hey. Fatigue is fatigue. Toward the end I was almost counting the minutes until I could come back up here, write about my day and go to bed. 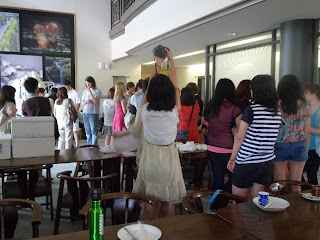 As people left to sing karaoke or go clubbing in Kyoto, I walked my behind upstairs, sat down at my desk and called it a night.

And that was my day.