Whew, it's good to have my nose back in these books that I actually want to read! I read this one in two days, and I forgot how validating it feels to just spend all day reading, unbothered. The written gem I just finished is Issa Rae's first book, The Misadventures of Awkward Black Girl. It bears the same title as her groundbreaking web series "AWKWARD Black Girl", which has catapulted her to online (and increasingly mainstream) renown since it premiered four years ago. I wrote about her briefly two years ago while discussing black Youtube channels that kept me sane while in Japan (part 1 / part 2), and I'm glad to have a chance to sing Issa Rae's praises in more depth.

The Misadventures of Awkward Black Girl by Issa Rae 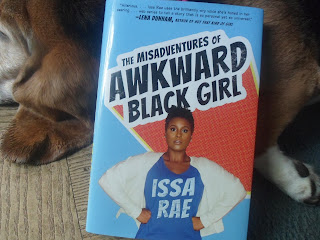 Rather than a linear, straightforward autobiography, this is more a collection of autobiographical essays in which Issa Rae recalls various awkward moments or phases in her life, occurring from around middle school to the present. She basically posits herself as the titular "awkward black girl" or ABG (and why not, since she came up with it), and reveals how she's dealt with being different from how people expected her to be, struggling to be accepted, navigating pop culture and her bi-continental identity, and finding her way through love and life. These stories are interspersed with "ABG Guides", in which she offers tips on how to deal with specific awkward situations such as eating in public, handling people's reactions to her natural hair, dealing with various types of co-workers, and the undesirability to which Black Women and Asian Men have been unfairly relegated.


In all honesty, this book isn't as funny as I hoped it would be. Once you get familiar with her work online and her persona on social media, you'll see that Issa Rae, though not a comedian, is an incredibly witty individual. (If you really want a taste of Issa Rae's wit, check out the hilarity that is her YouTube series, "Ratchetpiece Theater"). So while I wasn't expecting to bust a gut laughing, I thought I would be more amused than I was. But it's cool, because I got something else from her book that I wasn't expecting--some honest, open vulnerability. I already knew Issa Rae was an interesting individual, but her story is quite remarkable. For all the jokes she makes, how successful she is, and however put-together she seems, Issa Rae's really been through some stuff. She has a past, she has baggage. But she's dealing with it, and sharing it with the world as she does,  and I greatly respect her for that. I especially appreciate her "African Dad" chapter,  where she discusses her parents' divorce and her ruptured relationship with her dad. As someone who also has her own set of daddy issues, I related to and was moved by this chapter the most. Other highlights include "ABG Guide: Connecting with Other Blacks" where she gives examples of different kinds of black people one might encounter (very reminiscent of Baratunde Thurston's How to Be Black). I also related to her chapter about food and weight issues entitled "FAT", for obvious reasons.

Lastly, something else I was delighted to learn about Issa Rae is that she's francophone!  Her dad is from Senegal, she's spent lots of time and visits there especially during her younger days, and she's very familiar with her Senegalese family. From what I can tell from her book, she's thus a heritage speaker of French, and knows more than enough to get by. So props to her, representing for the Motherland and for French-speaking women of color! I salute you!

If you're not so much looking for big laughs but are interested in learning about the mind and backstory behind one of the most prominent young black creators right now, then The Misadventures of Awkward Black Girl is definitely worth reading!

"How hard is it to portray a three-dimensional woman of color on television or in film? I'm surrounded by them. They're my friends. I talk to them every day. How come Hollywood won't acknowledge us? Are we a joke to them?" (45).

"I was taught this caste system by a trio of mean girls in middle school who found glee in taunting me. To them, my insistence on wearing my hair in an Afro puff made me an easy target... one girl is now an actress/comedian who actually reached out to me on Facebook a couple years ago and asked to be a part of my web series, The Misadventures of Awkward Black Girl, when it started to gain popularity. I looked at my computer, thinking, BITCH, ARE YOU KIDDING ME?!?!?!?! HAHAHAHAHAHAHAHAHAHHAAHHA! BOW DOWN TO THE NAPPY PRIESTESS, MUTHAF$#@&%!" (71).
Posted by Deela (Danielle G.) at 11:51 AM