This is another advanced copy of that I snagged from the break room before anyone else could take it. It's about three American women who are expats, which is something I aspire to be. It's set in Asia, also where I aspire to be. And it's set in Hong Kong, which I'm not familiar with but have had fun catching glimpses of thanks to Kevin Kwan (Crazy Rich Asians, China Rich Girlfriend) and Bubzvlogz. AND, Kevin Kwan's blessing is printed on the introductory letter inserted by the book's publisher. So, much like my last read, I'm not familiar with the author but once I peeped all of these factors, I was sold. 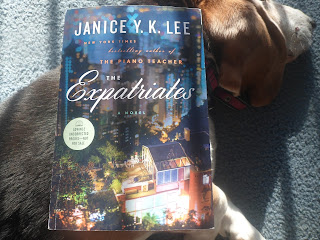 We meet Mercy first. A first-generation Korean-American from Queens, Mercy hasn't yet hit her stride like her fellow young, attractive, and promising Columbia graduates seem to have. Bouncing between jobs and bedfellows, she takes a chance moving to Hong Kong but still struggles to make something stick. Her life just hasn't come together yet, and she consistently falls back on detrimental habits and misguided judgement as she believes she's destined for misfortune. Mercy is by far my favorite character in the novel. Except for the perpetual bad decisions, frequent dalliances with the "in" crowd, and being Korean, Mercy and I are basically the same person. I feel like Janice Y.K. Lee peeked into my life and wrote this character just for me, to remind me that yeah, quarter-life crises suck, but you're not the only one who's going through a sucky time, and that's okay. Mercy's a mess but she's trying, and that's exactly why I love her!

Then there's Margaret, a married wife and mother from San Francisco who gives up her career as a landscape architect to move the family to Hong Kong when her husband gets assigned there. She is also Mercy's employer for a short period of time. Margaret serves as an archetype for the upper-class married American expat woman who's followed her highly-paid professional husband, filling her time with social groups, elite clubs, dinner parties, charity benefits, supervising the help, country-hopping vacations, and being a mom. All signs indicate that she and her life are "perfect", but a tragedy leads her to buy a secret apartment in a run-down neighborhood to escape from this perfection from time to time.

And last but not least comes Hilary, another married woman whose life isn't so perfect. She and Margaret grew up in the same social circle in San Francisco, but they were never exactly friends. From shedding her baby fat, to going to the right school, to starting a career and then finding the perfect guy, everything has fallen into place for her. But now she's at an impasse reconciling her type-A expectations and facing whether or not she really wants what she's worked so hard to get. She's losing herself in the life that she's created in Hong Kong, which involves this odd, self-appeasing, prolonged trial-run with a local multiracial orphan boy whom she's considering adopting. Oh, and finding solace in anonymous online forums.

These three women are connected through a certain tragedy and the consequences of a certain indiscretion, in addition to all the unknowns that come with living as a foreigner in another country. In transitory and unstable expat life, things can fall apart or unexpectedly change in an instant. And in her own way, each of the three woman struggles to feel like a real, whole person. Each is unsure of whether or not she knows and deserves happiness. But don't misunderstand, The Expatriates is such a fun read! You know that one person who has the inside scoop on everything and has no qualms fueling the rumor mill by telling everybody's business? Janice Y. K. Lee uses her narrative voice to be that person, and at times the book reads like gossip that is just too juicy not to be enjoyed! If you've ever traveled or lived abroad, have had to bounce back from heartache, have had trouble figuring yourself out, are a mom, or if pettiness is your guilty pleasure, then I think you would really enjoy The Expatriates. At least I hope you will!


"She was grateful for the simple gesture the woman in the lobby made, helping her to work the lever. This is a person, she thought, who doesn't know what I've just done. The woman's nod and smile were like a salve to Mercy, who didn't expect kindness from anyone ever again after what had happened. She sipped the hot water, felt its warmth trickle down her throat, shivered, and wondered if she'd ever feel warm again" (109).

"That woman cannot tell you you are not allowed to be happy. She is not in charge of you... You have to get down to the level of the thing. Don't be too proud to do it... and these things can happen. It is not all your fault. You can live your life. You are allowed" (306).