I went to see this movie over three weeks ago and forgot to write about it. Not because it wasn't worth writing about, mind you; I just got caught up and it slipped my mind. On the contrary, given the overall unappealing cinematic options that the holiday season had to offer, I'm actually glad that I kicked off my 2015 filmgoing with this one.


In the 1950s and 60s, Margaret Keane is at first elated when her second husband Walter Keane recognizes her talent and gets her paintings noticed, promoting and selling them under the name "KEANE". But as the big-eyed waifs cause a stir in the art world and became a hot commodity nationwide, Walter takes all the credit, locking Margaret in a room to continually produce paintings whilst getting no recognition. When she finally decides to leave the relationship and stand up for her work, she has to battle it out in court to prove to the world that she is the real artist. Based on a true story. Directed by Tim Burton.

"She created it. He sold it. And everyone bought it." 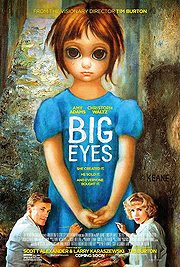 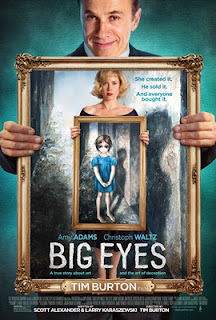 What I really like about this film: This is quite the peculiar story! I'd read an article in People that implied that Margaret didn't know what Walter was doing with her paintings, nor that her work was famous and the "hot thing" in art at the time. But in the film it makes clear that Margaret did know, but  wasn't originally aware of her husband's maniacal, money-hungry, and attention-starved intentions. For years she hadn't spoken up to claim her work because she didn't believe people would support a woman artist. She naively trusted in her husband's business acumen, and was blinded by mid-20th century dogma that told her to obey her husband and let him take care of everything. So the question of complicity made for some confusion on my part at first, but other than that this film's storyline is straightforward.

Another aspect I enjoyed about this film was its style. Of course, being a film about art, this film prioritizes the story in question and stylistic detail and accuracy (this includes color and tone, sets, wardrobe styling and even casting that reflects ethnic demographics). The events take place largely in the San Francisco art scene during the 50s and 60s, which was a particularly tumultuous yet remarkable time in our country's history, but there were no references to major historical events going on at the time. Why? Because the visual aesthetic and the story matter most. Usually I'd have a problem with historical context being missing in such a way, but it actually works well for the film because it shows you what era you're in rather than telling you about it.

Lastly, I have to give kudos to Amy Adams! Her performance was so vulnerable and compelling. She's one of the few actresses I care about, and though I'm not cognizant of all her work I notice that she often takes roles that pay homage to women who do remarkable things (à la Julie and Julia). Much respect to her.

What I don't like about this film: I can't pinpoint anything in particular. One thing I would've liked to know is what inspired Margaret Keane to make portraits of sad-looking, big-eyed children. What led her to take on that subject and how did her particular style develop? That was a question raised in the film, but it was played off by Margaret's  repeated assertion that art is personal. And so we never find out the "why" behind her pieces. But as an artist I can respect her not wanting to give it all away, so to speak. Some things are sacred and personal, so while I am left wondering, I can definitely accept not being privy to that information.