BOOKS! (The Round House)

THIS BOOK NEEDS TO BE REQUIRED READING FOR ALL STUDENTS IN THE AMERICAN EDUCATIONAL SYSTEM.

Life on Native American reservations. Desecration of bodies and sacred spaces. Historical legal precedents of white people giving themselves the right to steal Indigenous land and lives. Loopholes and an inability to obtain justice due to a messy overlap of competing land rights and jurisdictions. Violence against Native women.

These are real. These are things that are still going on that we need to know about. And these are the details that we need to be studying in school, instead of being fed farces about Thanksgiving goodwill and acting like Christopher-he-who-shall-not-be-named wasn't a murderous, navigationally-challenged fiend. Requiring students to read this 2012 National Book Award winner would be an invaluable step in that direction.

The Round House by Louise Erdrich 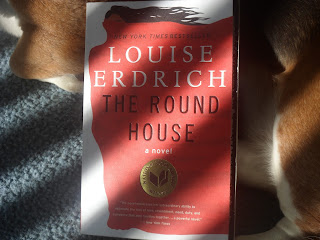 Joe is a boy living on an Ojibwe reservation in North Dakota. He is only 13 years old when his mom, Geraldine, is brutally beaten and raped in the spring of 1988 at the a Native place of worship called the Round House. Tribal, state, and federal authorities launch an investigation on the attack, while Joe and his dad (Bazil, a tribal judge) pick up the pieces at home and try to keep a wounded and broken Geraldine from giving up on living. Bazil and Joe dig for as many answers as they can on their own, but when the investigation stalls and it becomes clear that the perpetrator won't be punished even after everyone figures out who did it, Joe decides to take justice into his own hands. Over a tumultuous summer he is emboldened by the support of his four best friends, the spirits of his ancestors, the knowledge of his people's legal history instilled in him through his father's instruction, and his elders' folk stories.

This novel is heavy. As it should be. Erdrich states in her afterword that at least 1/3 Native women will be raped in their lifetime, 86 percent of sexual assaults upon them are committed by non-Native men, and the vast majority of cases aren't prosecuted. And you really can't talk about sexualized violence against Native women without discussing their status as Native people, and how Native peoples have been gruesomely and criminally disenfranchised by this country from beyond the beginning. So in this novel, Erdrich uses a fictional incident of rape to discuss all of this. And it. is. heavy. As it should be.

What's crazy to me is that Joe's mom isn't even the main target in the particular incident she was involved in (you'll know what I mean once you read the book), and yet look at how brutalized she is. And look at how much her family and others on the reservation suffer and are forced to become different people as a result of what she is going through. When people talk about trauma devastating communities, especially in regard to communities of color in this country, this is what they mean. If it happens to one of us, it happens to all of us in some way or another. I find this to be true in my personal experience as a Black person, and The Round House appears to indicate that individual trauma becomes shared as part of community-wide trauma in a similar way for Native Americans.

I would recommend this book to any American citizens or residents who don't want to keep their heads in the sand about the people who were here first, and are still here.


"They lived and died too quickly in those years that surrounded the making of the reservation, died before they could be recorded and in such painful numbers that it was hard to remember them all without uttering, as my father did sometimes as he read local history, and the white man appeared and drove them down into the earth, which sounded like an Old Testament prophecy but was just an observation of truth. And so to be afraid of entering the cemetery by night was to fear not the loving ancestors who lay buried, but the gut kick of our history, which I was bracing to absorb. The old cemetery was filled with its complications" (100).

"Look at me. Would I wreck her life? The Creator made us for each other. Me here. Zelia there. Space was put between us by human error. But our hearts listened to divine will. Our bodies, too. So fucking what? Every bit of what we did was made in heaven. The Creator is goodness, brother. In his mysterious mercy he gave me Zelia. The gift of our love−I can't throw it back in the face of the Creator, can I? That's what her parents are asking me to do. But I won't do it. I will not throw our love back in God's face. It will exist for all time whether or not her parents can see that. Nothing they do can get between us" (312).