Okay, so it took me a little longer than "tomorrow" to get this done, but it's done! So let's get into it! Picking back up from part one, here's part two of the Japanese dramas I watched this summer: 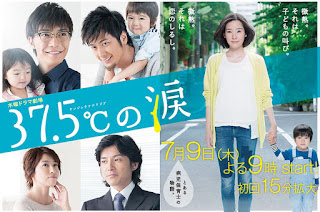 Main character Momoko (Renbutsu Misako) works for Little Snow, a homecare nursing service that dispatches its employees to families' homes to take care of sick kids when their parents can't take off work to tend to them. (37.5°C is the fever cut-off point, at which school and daycare staff are required to send children home in order to protect the well-being of the other children.) Momoko loves her job and is dedicated to being the best she can be, but she isn't always received well because she has trouble communicating with people and has an awkward smile that weirds both children and adults out. We find out later that her awkward timidity and lack of confidence are due to her being abused by her mother and two older siblings from childhood until she left home at age 17. After six years of living free and clear from her toxic family, her relatives find her and proceed to guilt/strong-arm her into returning home to look after her dying father. None of them wants to be bothered with him so they pass the responsibility onto her. Desperate to finally feel like she belongs somewhere, Momoko is torn between her family's (especially her mom's) sadistic clutches, and overcoming her trauma to commit to doing what she loves for once. Oh and of course, that and responding to the competing affections of her boss and the soon-to-be divorced father of one of her homecare kids, because what's a J-drama starring a female protagonist without a love line or triangle?

'37.5°C no Namida' spends a lot of time getting viewers to consider how modern families with one or more working parents operate in various forms, and to consider how much parents love and make sacrifices for their kids even though for some it may seem at first glance that their children aren't a priority to them. But what endeared me most to this drama is its focus on a grown woman still struggling to overcome her abuse and the mentality she developed because of it. I wasn't abused as a child, but I do have an extremely difficult relationship with one of my parents, so I felt for Momoko. Trying to deal with that as an "adult" in addition to giving yourself permission to do and be what you want is hard. Really, really, hard. So props to this show and everyone behind it for giving this perspective some attention. 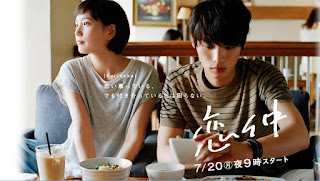 Akari and Aoi have been best friends since childhood in their hometown of Toyama. In high school, Aoi tries to express his feelings for her, but when Akari has a family crisis, the new kid and their mutual friend Shota swoops in before Aoi can make his move. Then Akari disappears. Six (seven?) years later in Tokyo, Aoi is working at an architectural firm when Shota shows up to reacquaint himself and announce that he and Akari are an item. This makes Aoi realize that he's not over her, but he spends most of the show fighting his feelings (as does Akari) because he doesn't have the courage to be honest. So in this love triangle we have: two long-lost friends who love each other but are terrible at expressing their true affections, and another man who's desperate to cover his tracks and keep the woman all to himself. With whom will Akari end up? You'll have to watch the show to find out.

'Koinaka' comes from two of the same three directors of 2013's 'SUMMER NUDE', another summer drama based on first loves, coming to terms with the past, and young attractive people toeing the line between friends and lovers. Except I found the premise to be much more engaging and easy to love this time around, for a few reasons. First, while I do have a soft spot for Fukushi Shota (who plays Aoi) due to his role in 2013's 'Starman', there are no absurdly big-named stars to distract from the quality of the story (at least not for me, unless I'm out of the loop). Second, it's not set away in some idyllic beach town detached from real life, but in the mega city of Tokyo. And third, the main characters are much more relatable: 20-somethings from the same hometown in the countryside who are each beginning their careers and meandering their way through adult life and love in the big city, hitting external and internal bumps along the road as they go. I loved this show so much that I live-texted my friend each time I watched an episode! 'Koinaka' is a drama about young love and the quarter-life crisis that pulls at your heartstrings, but isn't so lovey-dovey as to induce eye-rolling or nausea.

And there you have part two! If I had to chose my favorite out of all four dramas that I watched this summer, it'd have to be 'Koinaka'. Hands down. With 'Kare, Otto, Otoko Tomodachi' and '37.5°C no Namida' tied at a close second. But as usual, I would recommend all of these dramas to anyone interested (except for 'Hanasaki Mai'). Hope you enjoyed my review. Until next time!