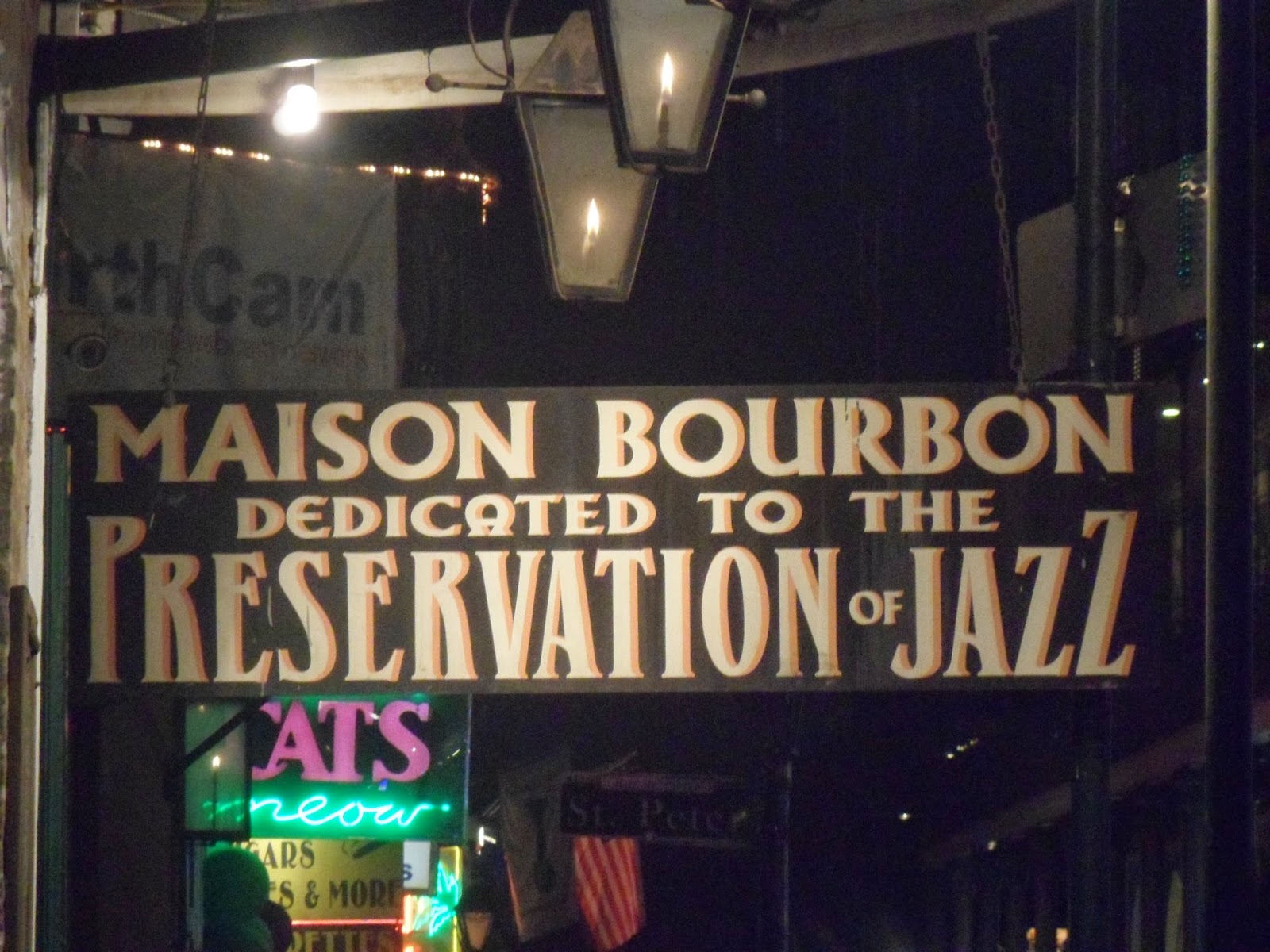 Our last stop of the night was a jazz club near our hotel by the name of Maison Bourbon. In a nutshell, Maison Bourbon is a great place to just sit, relax, and enjoy some good ol' authentic traditional jazz. It's a bonafide jazz club amongst the tourist traps that line Bourbon Street, keeping the tradition going with live performances every night. One of the oldest jazz clubs in New Orleans, it strives to upload its cultural and artistic mission: "Dedicated to the Preservation Jazz".

When we arrived there were two open stools at the bar waiting for us. The joint has no cover charge but there is a one-drink minimum per person. Ma chose white wine, and I, with my under-the-weather self, chose hot toddy. This place is laid-back but it does have another important rule, which is "NO VIDEO RECORDING"! There's a sign that reads exactly that on the wall behind the stage, and they mean it. When you walk in you're supposed to sit down, drink, and enjoy the music. That's it. You can sneak a photo or two (like I did), but recording performances is a no-no. During a set while one of the other musicians was doing a solo, the bandleader actually waved at an audience member to get their attention, then pointed upward toward the sign behind him. It was subtle enough that I'm sure the guilty party wasn't embarrassed, but the point is that they're really serious about this particular rule. So just have a good time and don't try your luck. 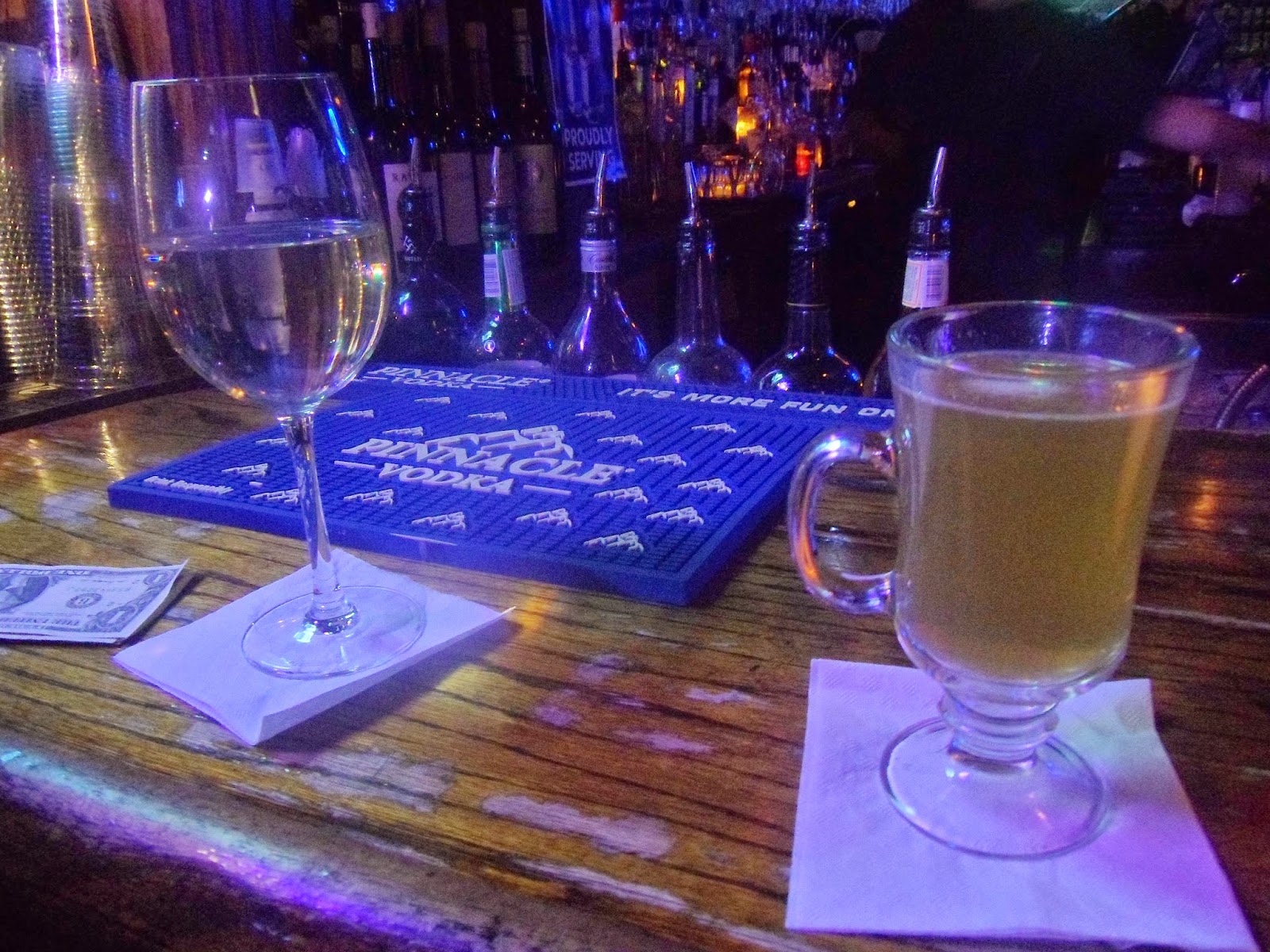 At the bar, Ma and I had happened to sit next to two women who'd slipped away from a bachelorette party and were hiding out at this club. The one directly to my right was very friendly and talkative, and upon finding out that we were visiting New Orleans for vacation, she asked what our plans were for the week. From the little that I know about people from new New Orleans, I know that they LOVE their city and love even more to extol her virtues to others. Sensing a golden opportunity, I lied and responded that we were playing it by ear, but would she have any recommendations? Did she ever! Turns out she's actually from Texas but has been living in New Orleans for 12 years, so she had plenty to say about where and where not to go, what and what not to do. Incredibly helpful and passionate advice just kept flowing from this woman. The most vehement of which was: 1) The Quarter is a tourist trap and you'd do well to explore outside of it as much as you can; the more uptown you get the neater your surroundings get, and the less likely you'll end up paying for "overpriced sh*t". 2) Ghost tours are a sham. And 3) A swamp tour with Airboat Adventures is a must! There were a lot of other tips in between, but these are the ones she repeated the most. The more the woman talked the more excited about her city she got, and the more she wanted to give us the ins-and-outs. In fact, she didn't stop talking until the bride-to-be found found her and her friend there and made them leave! She bid us goodnight, saying, "I hope New Orleans is everything you want it to be and more." And I thought, Wow. Not only are locals proud of heir city, but they really want newcomers to like it too. I find that so endearing.

Ma and I stayed through two and a half sets just until about 1am, and then finally went back to the hotel to turn in for the night. Still sick? Yep. Exhausted? More than I can describe. But I took comfort in knowing that things happen for a reason, and that dragging ourselves to Maison Bourbon allowed us to get insider tips from a local. We met one friendly local in San Francisco but didn't get an extensive rundown like the one we got here last night, so I certainly don't take it for granted. I'm definitely looking forward to exploring what other parts of the city have to offer!