Sunday (part 1): A Friendly Local and the Asian Art Museum

It took us longer than expected to get out of the hotel today. First Ma forgot her umbrella. Then the strap on my purse broke and I had to switch to my backpack. Then we had to move our things into the room next door (a smaller one, mind you) because our first room's ceiling was leaking.
When we finally got on our way, I stopped to take a picture of the facade of a Uniqlo store. A man was passing by and offered to take a picture of Ma and me. He was a tall, light-skinned man dressed in a particular way (think James Earl Jones in Coming to America, but in black and white, minus the furs and the accent). We declined, to which he replied, "Yeah, you never know with some of these folks out here. They might run off with your camera. That wouldn't be me, of course." He was a funny man.
Since we were all heading in the same direction, he kindly walked with us to the stand where we needed to buy transportation passes. He gave us a number of tips along the way. One of which was not to go too far down a certain street called Eddy. If we did, we'd see a lot of people shooting up, smoking, talking to themselves, etc. Oh ok, that might've been nice to know. We didn't mention that we'd already gotten acquainted with some of these people during our unsuccessful quest for soul food last night. He welcomed us to San Francisco and wished us safety and good times as we parted ways. 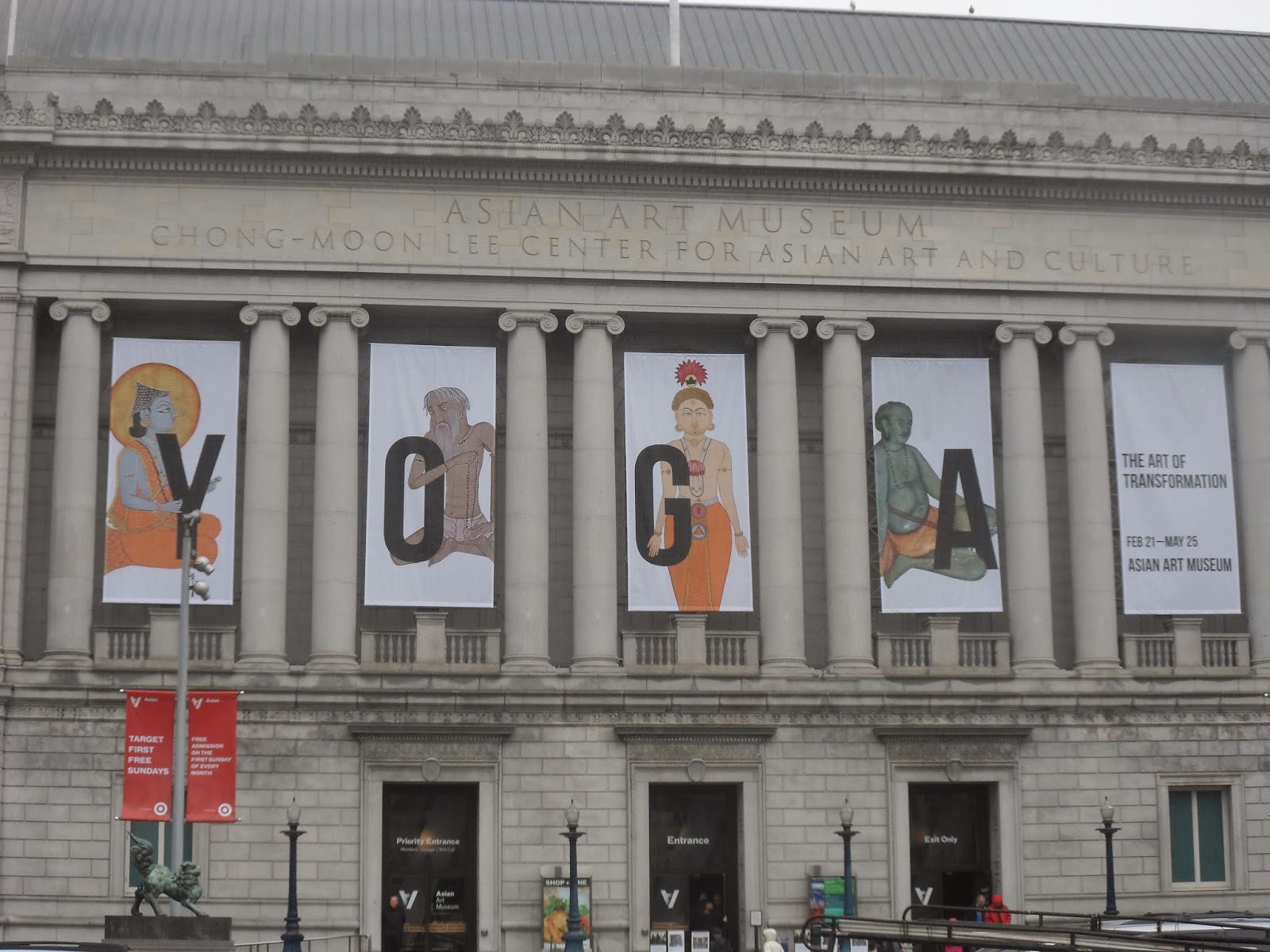 After getting our passes, boarding the correct bus, and walking a little ways, we arrived at the Asian Art Museum.  We went specifically for the "Yoga: The Art of Transformation" exhibit and it was excellent! It was divided into three galleries, going in chronological order, with the vast majority of pieces originating from the Indian subcontinent. The first gallery had paintings, sculptures, and illustrated scrolls and manuscripts of Buddha, Hindu gods and goddesses/yogis and yoginis, and people practicing yoga or imparting yogic wisdom. The second gallery went from paintings of folktales and historical events involving famous yogis to Western/Orientalist depictions of yogis through photo, print, and film. The last gallery had diagrams, text excerpts, and videos that linked yoga practice to health, science and medicine. I certainly didn't understand everything that I read or saw, but it was great learning about the concepts that formed the foundation of yoga, and also seeing how yoga changed in response to historical and cultural influences. 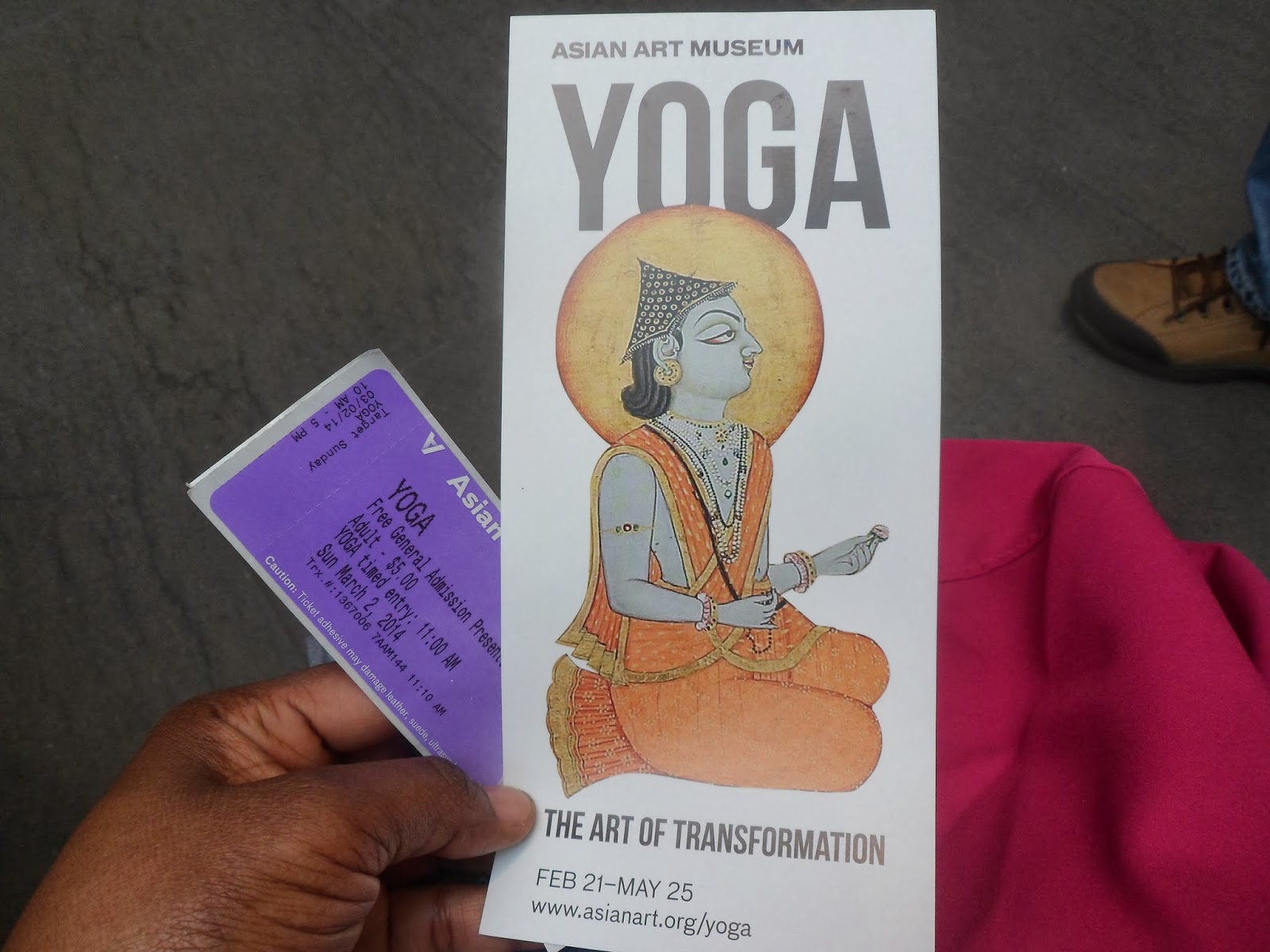 And this exhibit seems to be pretty popular;  there were all kinds of people there!  There was one Asian woman whom I found to be particularly interesting. At first I thought she was taking notes, because she would get really close to each piece and then start scribbling. But I was able to get a glimpse of her pad and realized that she was sketching! I overheard her telling someone that she'd even gone to India to study the style of drawing that was used in many of the paintings. How cool is that?

"Yoga: The Art of Transformation" runs from now until May 25th at the Asian Art Museum.
Click here for Part 2!