Continuing from my most recent review post, here are the dramas that I watched between last semester and the end of February this year. In the order in which I finished them: 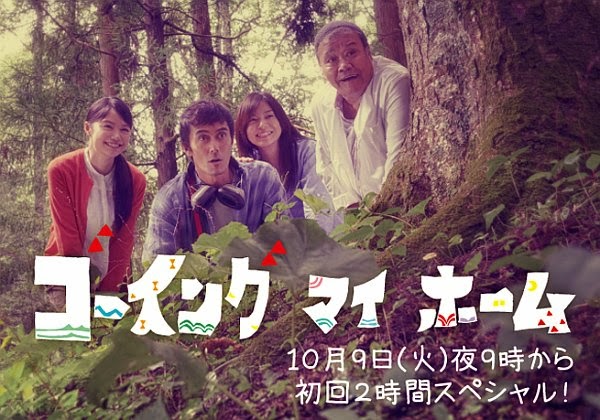 I watched this series as part of my Advanced Spoken Japanese class last semester. Usually I don't include class related materials here, but I just had to share this one. It's a drama for everyone that takes a look at family relationships and figments of imagination.

This drama's main character is Ryota, an ad exec who's just going through the motions at work and at home, not really fitting in at either place. When he's forced to take a break from his job and his father falls ill, Ryota begins to take frequent trips to his hometown in the countryside in order to be by his father's side. He is often accompanied by his professional chef wife Sae, and their strangely imaginative child Moe. While there the trio bond with Ryota's family, but also discover another side to Ryota's father that they hadn't known about. Part of this unknown past involves the grandpa's best friend and his estranged daughter, Naho, who fights daily to boost the town's population and keep alive people's belief in the "kuna" a magical forest-dwelling, elf-like creature who's been part of local folklore for centuries. As Ryota attempts to understand his father better and figure out whether "kuna" are real or not, he also learns the meaning of family and the value that there is in looking beyond what's visible. Witty and heartwarming with quite an element of fantasy (and quite a few open ends), this drama is incredibly more enjoyable and thought-provoking than I had expected it to be. Plus it's full of inspirational  one-liners that make you feel all warm and fuzzy inside. For example, "The world isn't only made up of things you can see", and "Having regret means that once there used to be love". If you're interested in watching a not-so-typical family drama, check out 'Going My Home'. 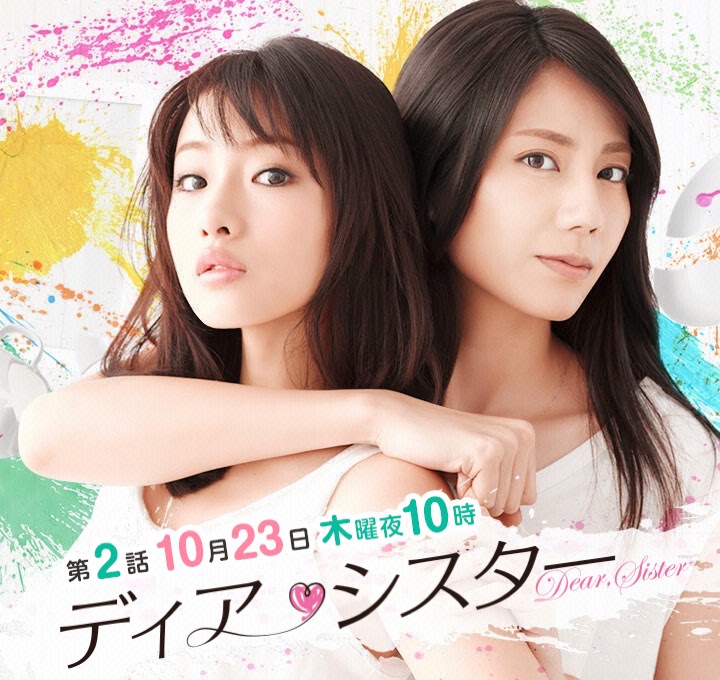 This series centers on the ups and downs of sisterhood, and features two actresses whose work I'm somewhat familiar with: Matsushita Nao ('Kamo, Kyoto e Iku') and Ishihara Satomi ('Shitsuren Chocolatier'). At first, straight-laced and no-nonsense Hazuki (Matsushita) is shocked and incensed when her estranged spoiled and carefree little sister Misaki (Ishihara) lets herself into her apartment and moves in after not having spoken in years. Much fighting and bitterness ensues, as Misaki seems to do various things with the intention of  ruining Hazuki's life. But it's soon revealed that Misaki's a woman on a mission. She keeps a diary of things she has to do because SURPRISE! She's pregnant, and SURPRISE AGAIN! She has MS, which means she could be dying. Basically she wants to help better her older sister's life and make things right between them so that she can have someone to look after her baby and die with no regrets. I know what you're thinking. Come on, pregnancy and a potentially fatal disease all in the same character? Talk about overdramatics. But these developments are worked in gradually so that, as far-fetched as the situation is, it doesn't feel overdone.  Throw in both sister's respective love lives, the moral of "it's never to late to mend relations and follow your dreams", and affecting and sincere performances from two popular actresses, and you've basically got gold here. Plus, the series's insert/ending theme song ("Happiness" by Che'nelle) is BOMB! No wonder this show was a hit when it aired. If you want to tear up, laugh the air out of your lungs, and then tear up again, 'Dear Sister' is for you! 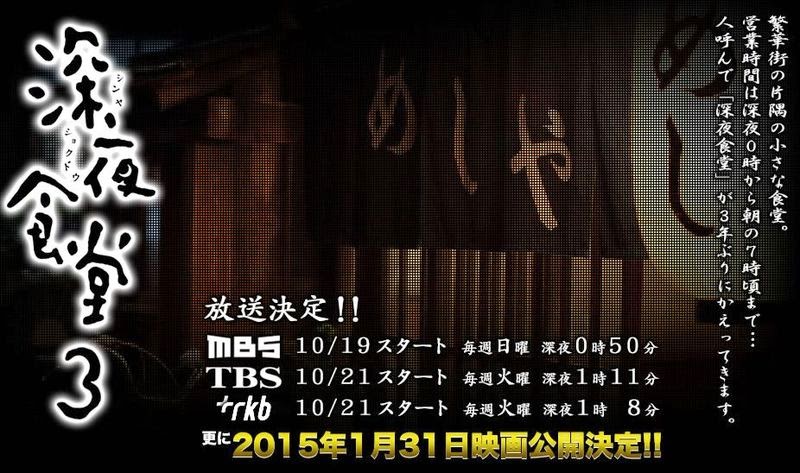 Like season 2 this season again focuses on everyday people, but this time it digs more deeply into moral ambiguity and the often incomprehensible nature of people's actions. Episodes have the exact same format as in the first two seasons, but with more culinary dishes and more human interest stories.

As the final season of this series, I'm glad that the series kept Suzuki Tsunekichi's "Omoide" as the opening theme song throughout the entire duration of the series. Since I was introduced to this drama through my studies in Japan back in 2013, hearing this thoughtfully melancholy song always induces a bittersweet nostalgia for me. Also, this particular season's ending theme song "Yakimochi" by Takahashi Yu is arguably the most pleasing to the ears out of all three ending songs used for each respective season. It's sad to see such a wonderful series end. Maybe I'll catch the recently-released 'Shinya Shokudō' movie so I can get one last taste of the franchise. 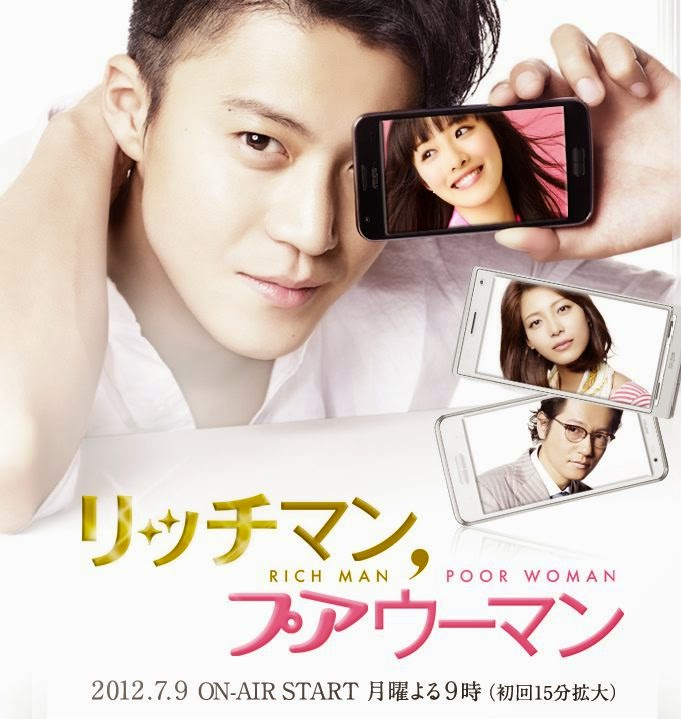 While writing this post I remembered that I'd watched another drama between this past summer and now. That drama would be 'Rich Man Poor Woman'. But I don't feel like writing about it in depth because  I've already written about four dramas that either Ishihara Satomi and Oguri Shun star in, and while they're two of my favorite actors I'd like to avoid overkill. So in a nutshell, this is a poor girl-rich guy love story set in the IT industry. Oguri plays a genius yet arrogant young IT mogul ("Toru"), while Ishihara plays a brilliant yet meek Tokyo University senior ("Makoto") who's having trouble finding employment. Through a series of events Toru hires Makoto as his assistant of sorts. And as Makoto helps the down-and-out Toru start a new business and deal with his past, their relationship doesn't stay platonic for long... I'll let you discover the rest! Don't let my lazy review be any indication of quality; this drama is definitely worth watching if you like lovey-dovey moments that are appropriately spaced out and aren't nauseating. I wasn't thrilled with how Makoto's character was written, but as Toru, Oguri has the jaded-misunderstood-mean-guy-but-really-nice-guy act down pat.

As usual it's hard for me to choose a winner this time around, but I'd have to go with 'Dear Sister' as my favorite this time. It's a heartwarming reprieve from the usual serious or gloomy stuff that you often see in fall or winter productions. And while I can't attest to whether its portrayal of sisterhood is realistic or not (shout-out to all the only children!), it's a feel-good story that makes you wish that it were true regardless. But of course, all of these dramas are definitely worth watching!
Posted by Deela (Danielle G.) at 10:21 PM