Today was sort of an educational day, where we spent the afternoon learning about Southern food culture and visiting the New Orleans office of a national French culture center.

After breakfast we bought Jazzy passes ($9 for 3 days), rode a streetcar a ways down St. Charles Avenue, then walked through the hood for a few minutes to reach the Southern Food and Beverage Museum (SoFAB) in Central City. With Ma being from Kentucky and us both liking food, we were eager to visit this young museum with an unconventional concept. 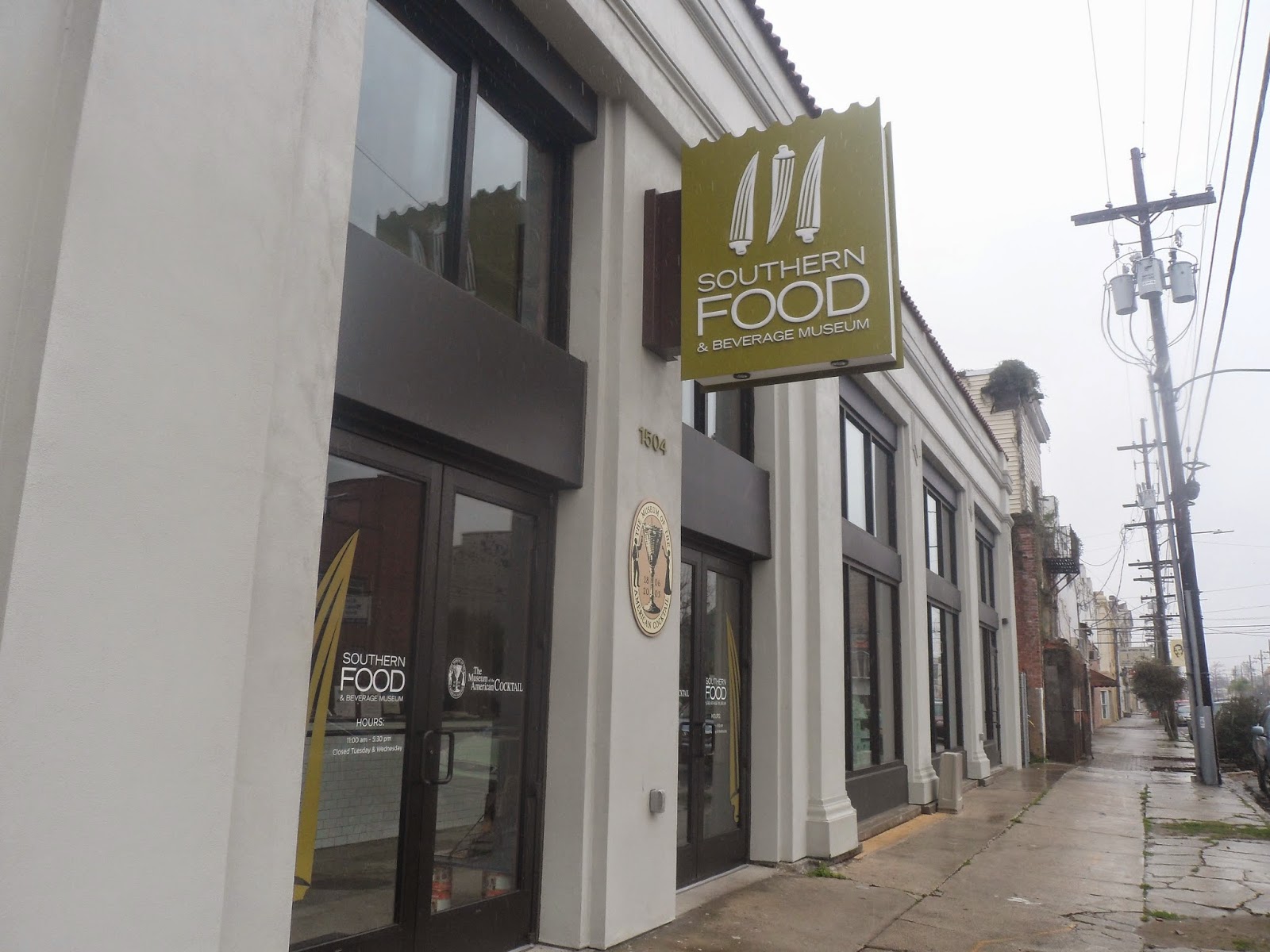 When we walked in we were greeted by Jennie, the director of education and outreach. She was manning the front desk explaining the layout, exhibits, and tidbits of New Orleans culture and history to all the guests who came in. Later we overheard her also offering tips for good places to eat to whoever asked. Now let's make clear that SoFAB is not your traditional "museum". You walk in and it doesn't look like much; at first glance it appears to be just a huge warehouse with a bunch of miscellaneous stuff in it. But you have to understand that it's all about the details with this place. It may be young, it may have just changed locations a few months ago, and it may still have a couple boxes to unpack, but none of that negates the care and creativity that's gone into curating this place.This museum is especially for you if you like open floor plans and replicas, trinkets, figurines, or antiques. 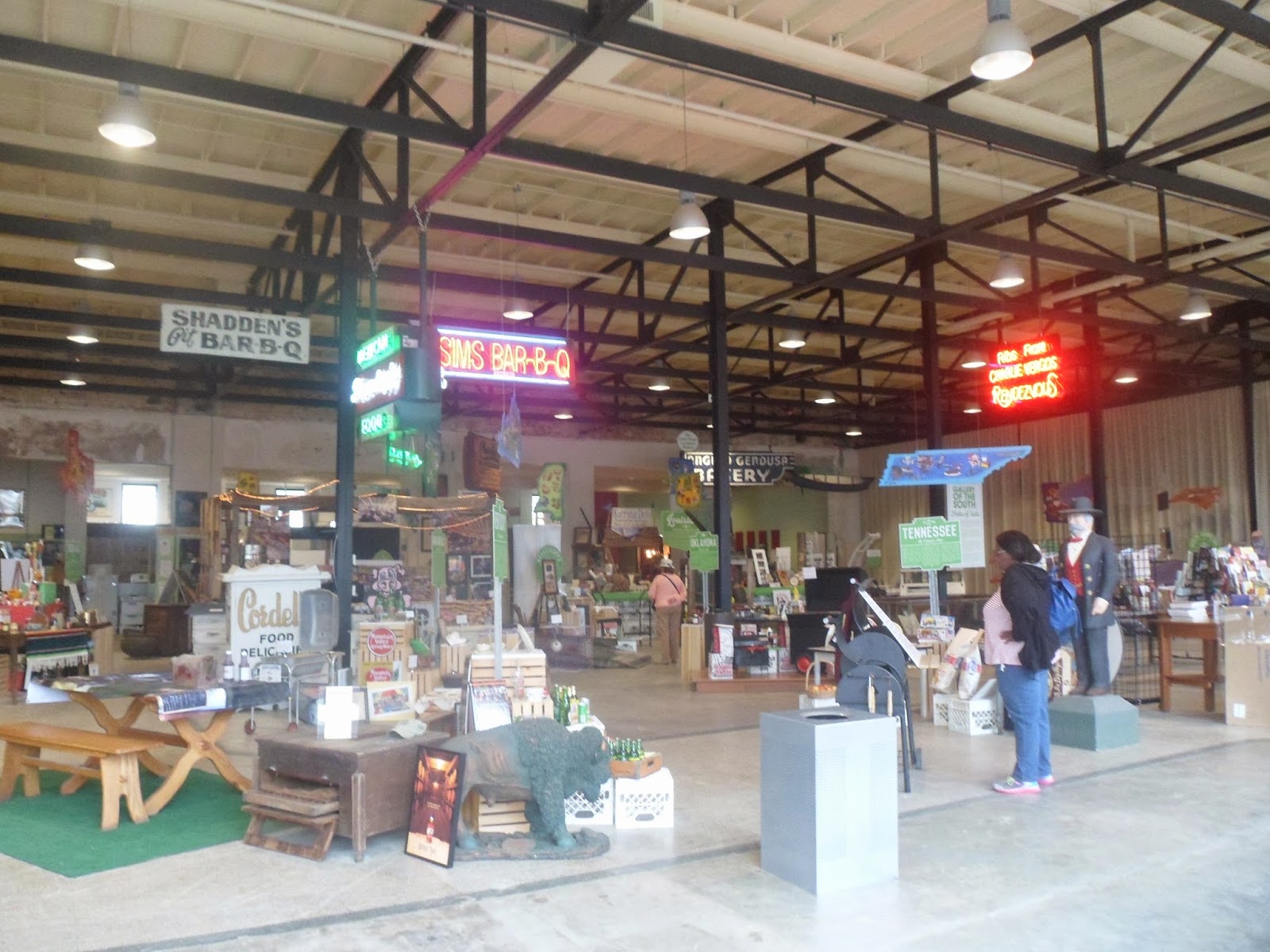 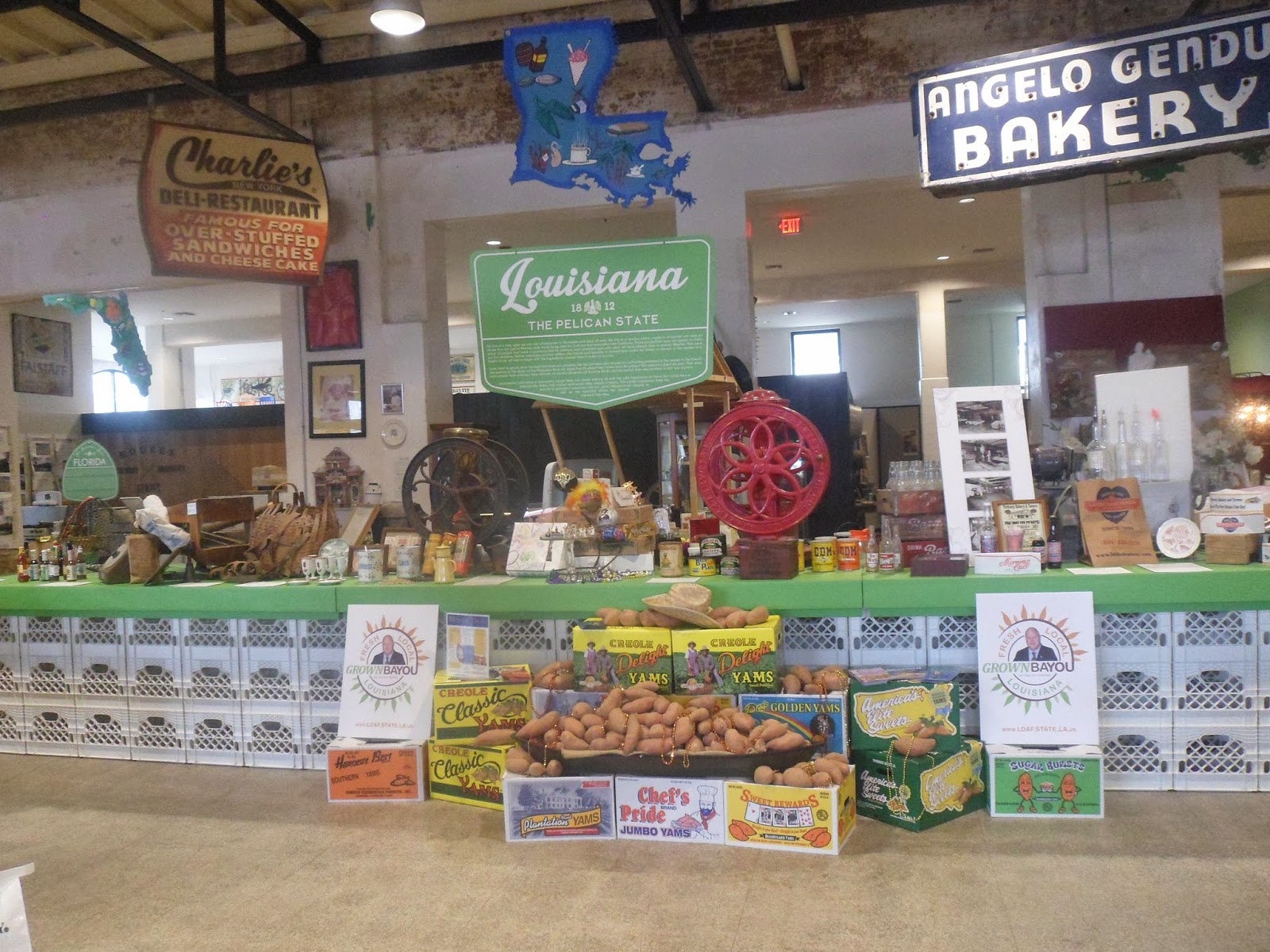 The character of the museum really shines through in the "Gallery of the South: States of Taste" exhibit.  This exhibit attracts the eye the most immediately since it's spread throughout the museum and each section of it is filled with various objects, shapes, signs, and colors. Most of the open layout is occupied by displays dedicated to each state of the South, featuring staple dishes, ingredients, and information about cooking styles and traditions. Louisiana's display is the largest, of course. In the back there's also an exhibit dedicated to Antoine's Restaurant, the oldest family-run restaurant in the country. SoFAB also holds the Museum of the American Cocktail and La Galerie d'Absinthe, which together consist of a huge wall dedicated to the history and varied quality of alcoholic beverages. And last but not least, there's a test kitchen (Rouses Culinary Innovation Center) to host tasting events or cooking demonstration, and a restaurant/bar (Purloo) to cater to hungry or thirsty patrons. Like I said earlier, you walk in and have a feeling that the museum's not quite finished. But that's great because it means SoFAB has loads of potential, and I think they're already doing a magnificent job of utilizing nearly every inch of their building space. 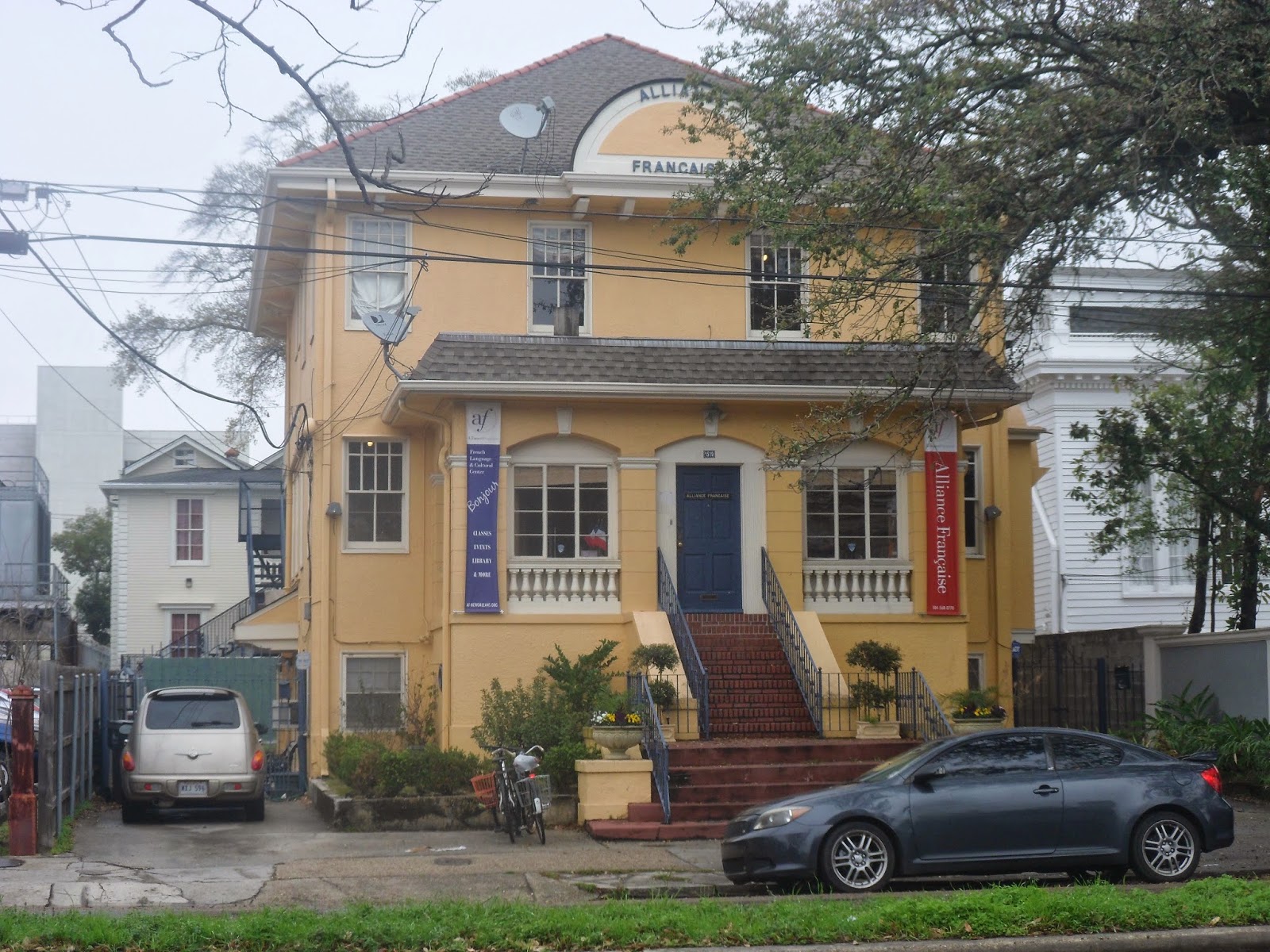 Our next stop was Alliance Française on Jackson Avenue in the Lower Garden District. For those who don't know, Alliance Française is an international organization that works to promote French language and culture by providing French courses, language testing, and cultural events in communities around the world. AF has centers in many major U.S. cities, and New Orleans is one of them. I wanted to visit l'Alliance Française de La Nouvelle-Orléans because as a French major in a city with a francophone history, it felt like a must. 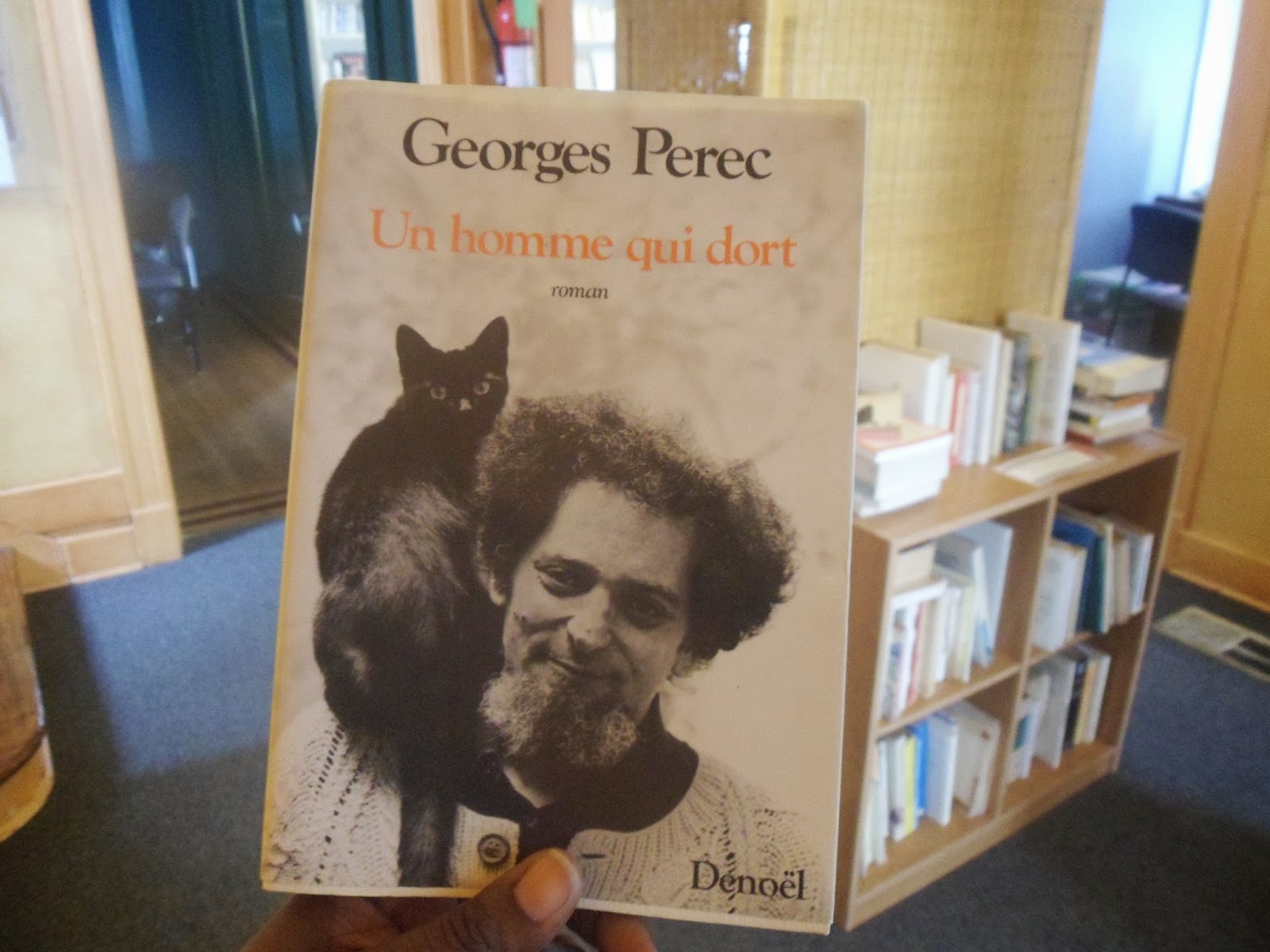 It's in an old house whose dining room and bedrooms have been remodeled into classrooms, with other rooms used for offices and a reading room/library. The one non-fluent staff member was the one to answer the door, give us a quick spiel about the place and tell us to "feel free to poke around". And I did just that. While Ma sat and waited in the reading room, I walked around the first and second floors looking at stuff and taking pictures. All the while overhearing conversations in French but being too intimidated to interject and introduce myself. Instead I perused the books they had on sale, picked one, and left a $5 in the donation box before leaving. Maybe I'll get up the nerve to go back for some conversation? 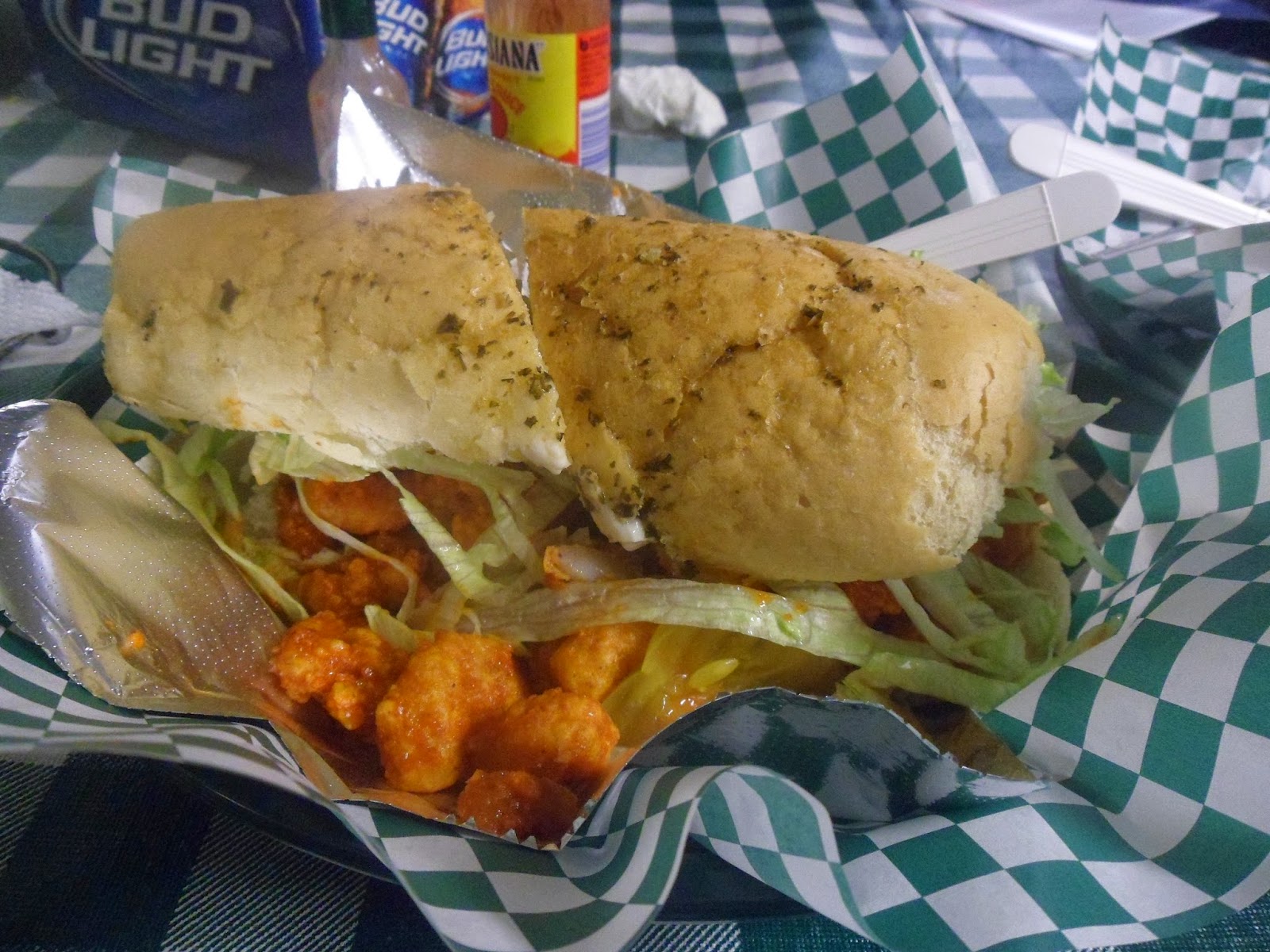 Next we took a short bus ride to Constance Street and walked through the neighborhood to Parasol's in the Irish Channel, since it wasn't far from l'Alliance Française. One of my goals here has been to have a different local specialty each day. Saturday it was beignets, yesterday it was Shrimp Creole, and today it would be po-boys, which Parasol's is famous for. We walked in and were stopped by a young woman at the bar who recognized the "Louisville Cardinals" print on my shirt. Turned out she was from Covington and she went to WKU, my mom's alma mater. Small world, apparently! After being welcomed by said woman, we passed through the bar and went up the stairs to the dining area to order. Ma chose the Catfish, while I chose the Parasol's Firecracker Shrimp. Since I'd ordered the smaller 6-inch sandwich, I thought it'd be easier to finish my food. But there was still so much of it (they purposefully stuff as much shrimp in there as possible), that toward the end I had to take breaks in between mouthfuls until I finally finished it. We left with full stomachs, hot mouths, and absolutely no complaints. 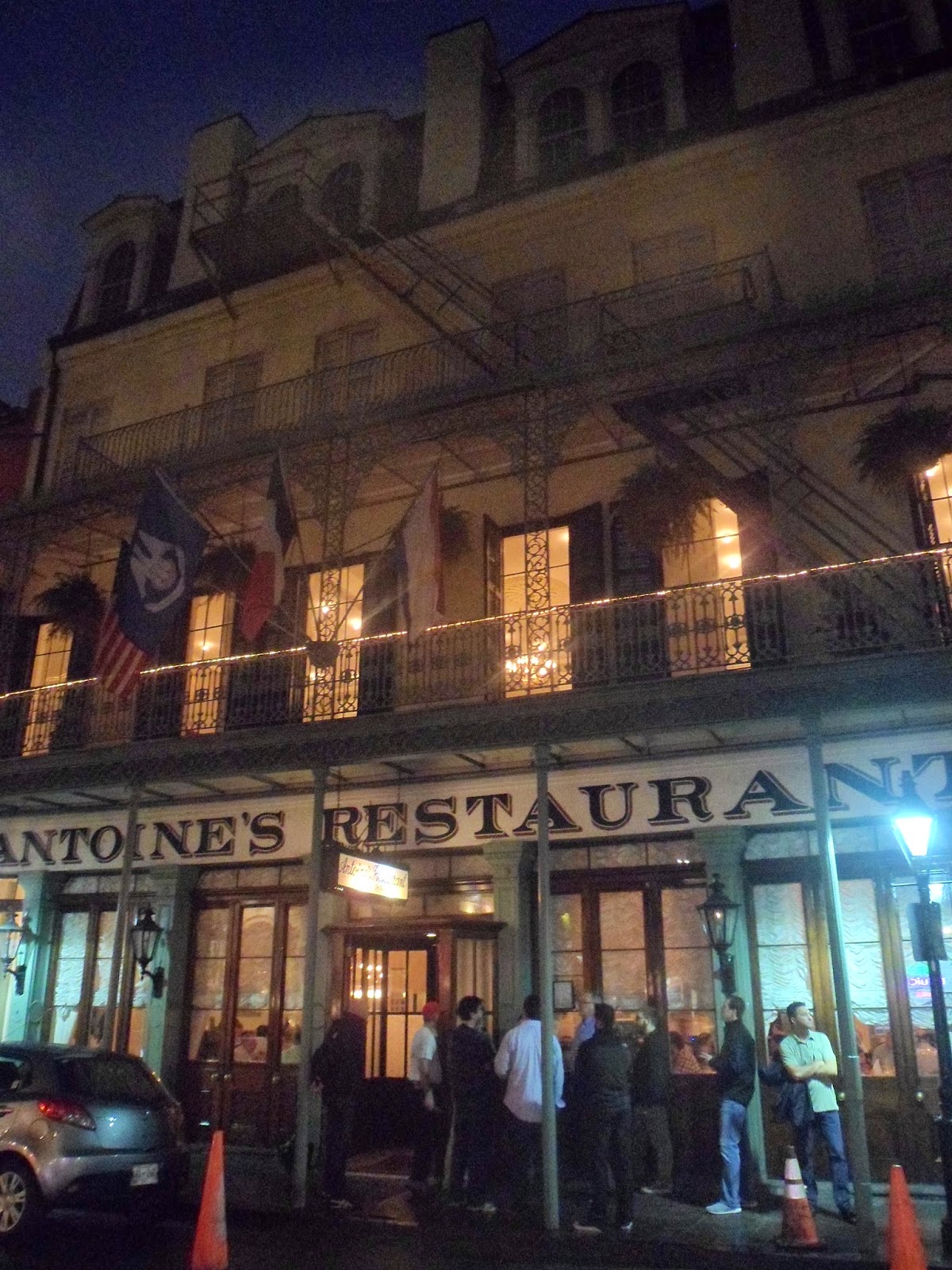 We made our way back to our hotel from there. We'd originally planned to go to the 8 o'clock show at Preservation Hall jazz club, but arrived only to be told that it was closed for a private event. So we'll just have to go back later this week. But since we'd dragged ourselves outside for this, we decided to walk around the Quarter for a bit and look for somewhere to eat. And what do you know! After learning about it at SoFAB earlier today, we came across the real Antoine's on St. Louis Street! Maybe I'll eat there one day in my life. Probably not on this trip though. Instead I just stood marveling at the building from across the street for a few minutes before moving on. Ultimately there were just too many options and we weren't in the mood to be out, so we returned and ate panini and fries at the hotel bar. Wasn't that great, but it was just about filling our stomachs at that point.

Unfortunately, I ended the night feeling like crud. Not sure if it's the time change, or the change in climate, or me being sick, or the heavy food (which we haven't been eating tons of, mind you), but I've been getting tired so early in the evenings since we've been here. I don't know what to do about all that except to just ride it out. But I do know one thing: Tuesday I shall find something light to munch on. Like a really colorful salad or bowl of fruit or something. Balance the good-but-bad-for-you yumminess out, you know?