Things People Give Me #18 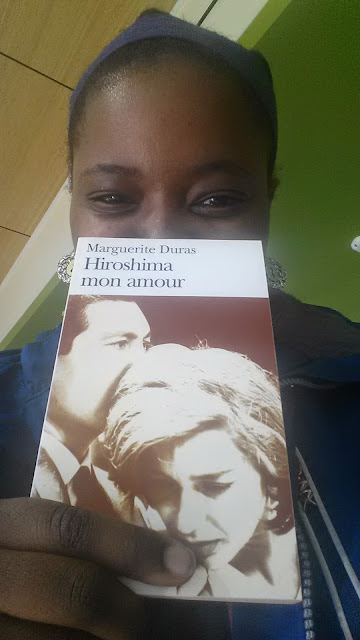 Yesterday morning I went to my French professor's office to turn in a paper that I'd forgotten to write over spring break (woops...), and he handed me this book in return. It's a copy of the play Hiroshima mon amour (lit. Hiroshima My Love) by Marguerite Duras. Set in Hiroshima after the dropping of the atomic bomb, apparently it's a series of conversations between a French woman and Japanese man who are ending their relationship whilst discussing the complexities of memory and trauma.

This particular professor knows that I study Japanese, and since he "didn't have use for it anymore", he'd decided to give Hiroshima mon amour to me. I was quite touched that he remembered this interest of mine and thought to let me have this book. I've only been reading French literature since sophomore year, and thought I've gotten good at it I could always use more practice. And plus, with me there's no such thing as too many books! So I'm happy to have this one to add to my collection.

Coincidentally  in my Japanese lit class we've been reading a novel about the bombing of Hiroshima (Ibuse Masuji's Black Rain) for the past three weeks, so receiving Hiroshima mon amour now is almost eery timing. AND, to add to the creep factor, the lead actor in the movie adaptation of this play is the same lead actor in Woman in the Dunes, a film we recently watched in said Japanese lit class.

(Side note: I've noticed since high school that this happens pretty often. When I  learn about something significant or spend a considerable amount of time studying a certain topic, that same topic then frequently and randomly appears through other mediums in my daily life. Like in an episode of a TV show, or a joke on the radio, or something I read on the internet, or a conversation that I overhear. Or in this instance, a book that's gifted to me. Not sure if this is kismet or just a coincidence, i.e. me being more sensitive and observant of these nuances because I have that subject on the brain so much at the time. But anywho...)

Thanks Professeur Ahmed for the book! It seems really interesting and I look forward to reading it!
Posted by Deela (Danielle G.) at 8:03 PM