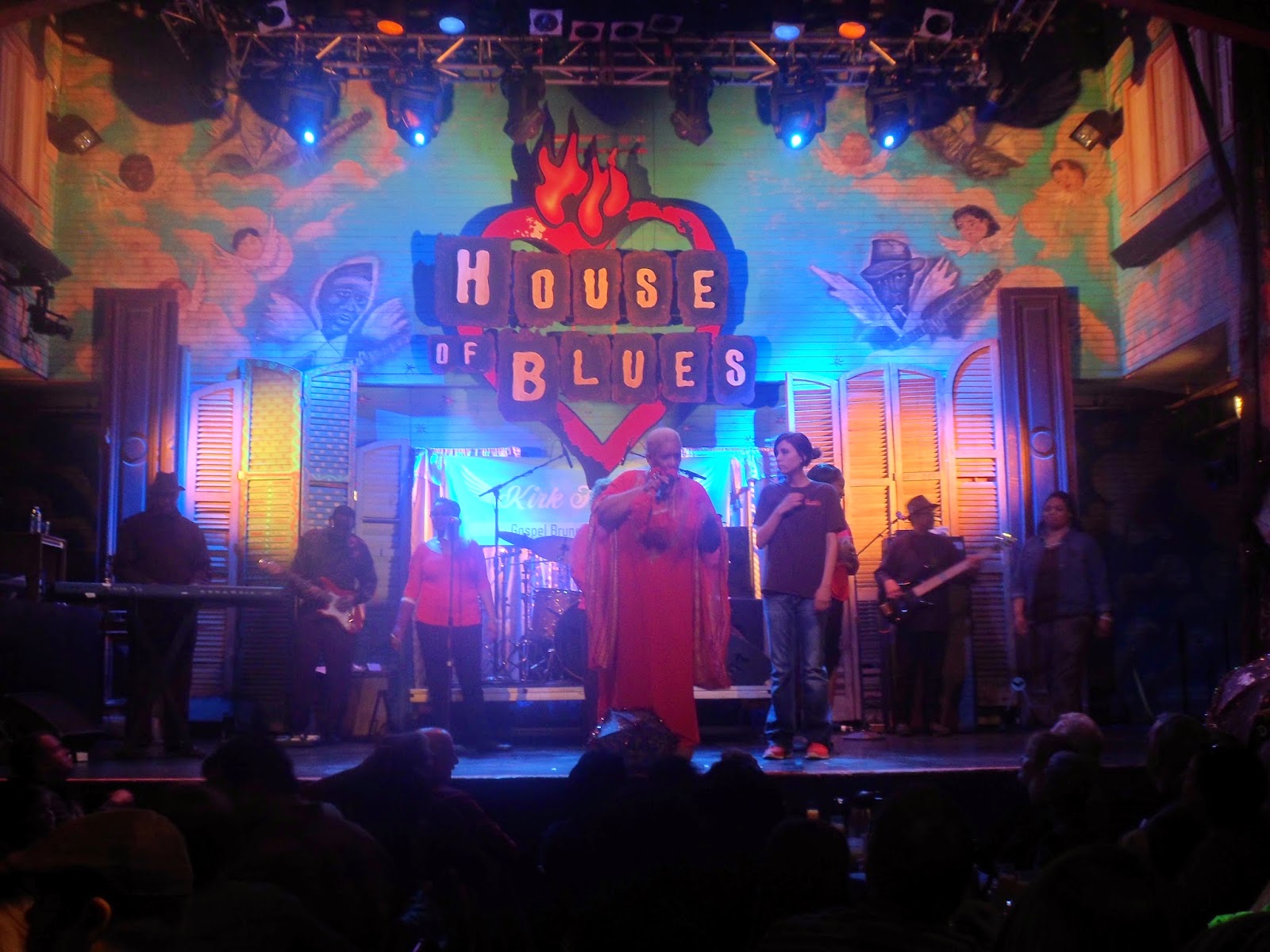 Since it was Sunday but we wouldn't be going to church here, I figured we could at least try to do something that was a little churchy. So off to the House of Blues we were for "Kirk Franklin's Gospel Brunch". The event has his name because he helped develop this "experience" for all HOB venues, but that's as far as it goes. While you don't get to see him or hear much of his music, you do get to enjoy an all-you-can-eat buffet and live performances of other gospel songs. 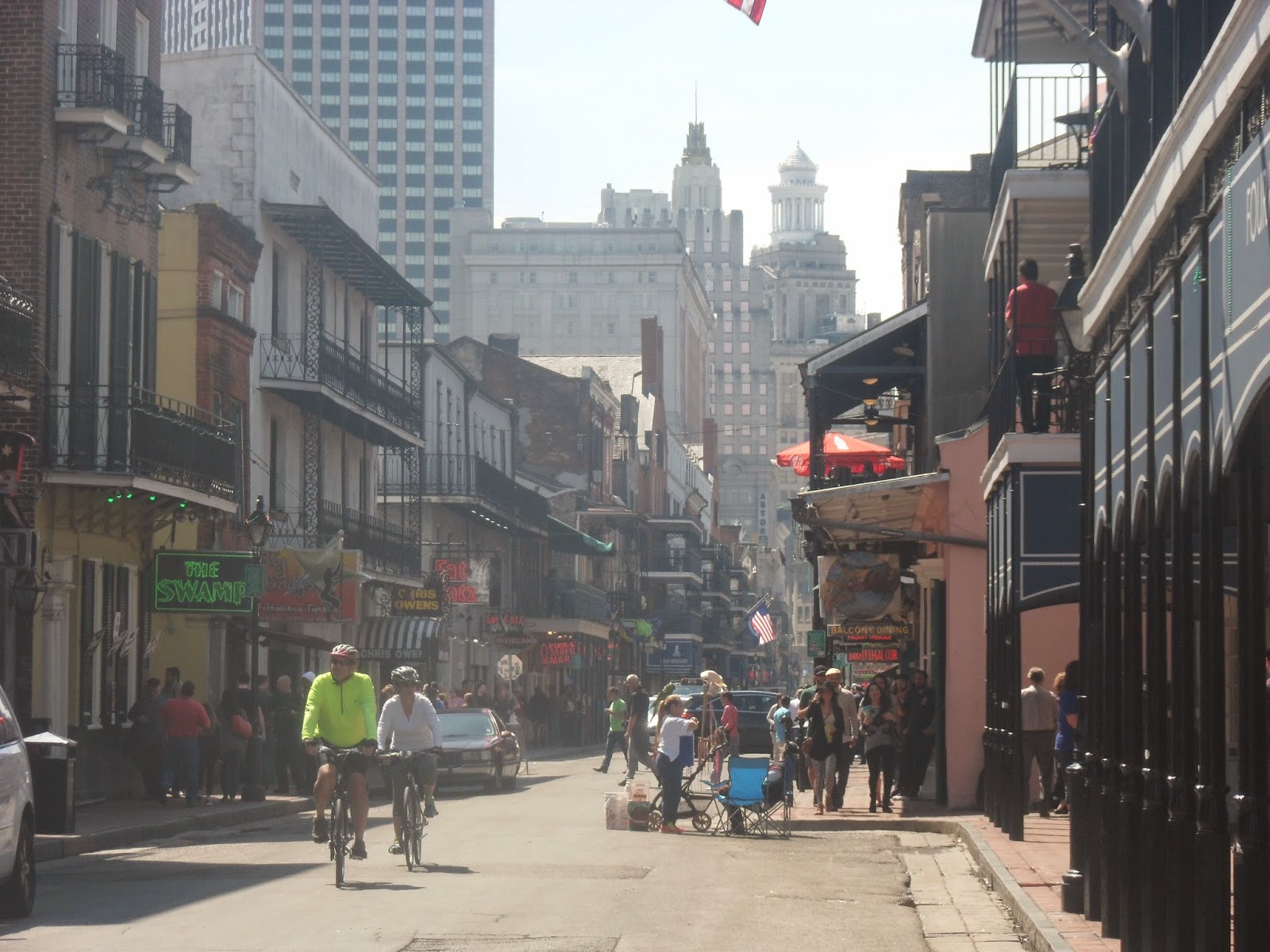 We walked from the hotel to HOB on Decatur Street in the morning,
and it was refreshing to see Bourbon street in the light of day. In the mornings people are washing the streets, it's calmer, and you get a better feel of the area's charm. I've already surmised that the Quarter isn't really my scene, but yet and still I find it intriguing because it's such a mishmash. Quaint yet raunchy, old world yet hip, laid-back yet bustling, it's so many things at once that you can't help but admire it even if you're someone like me who can't hang. 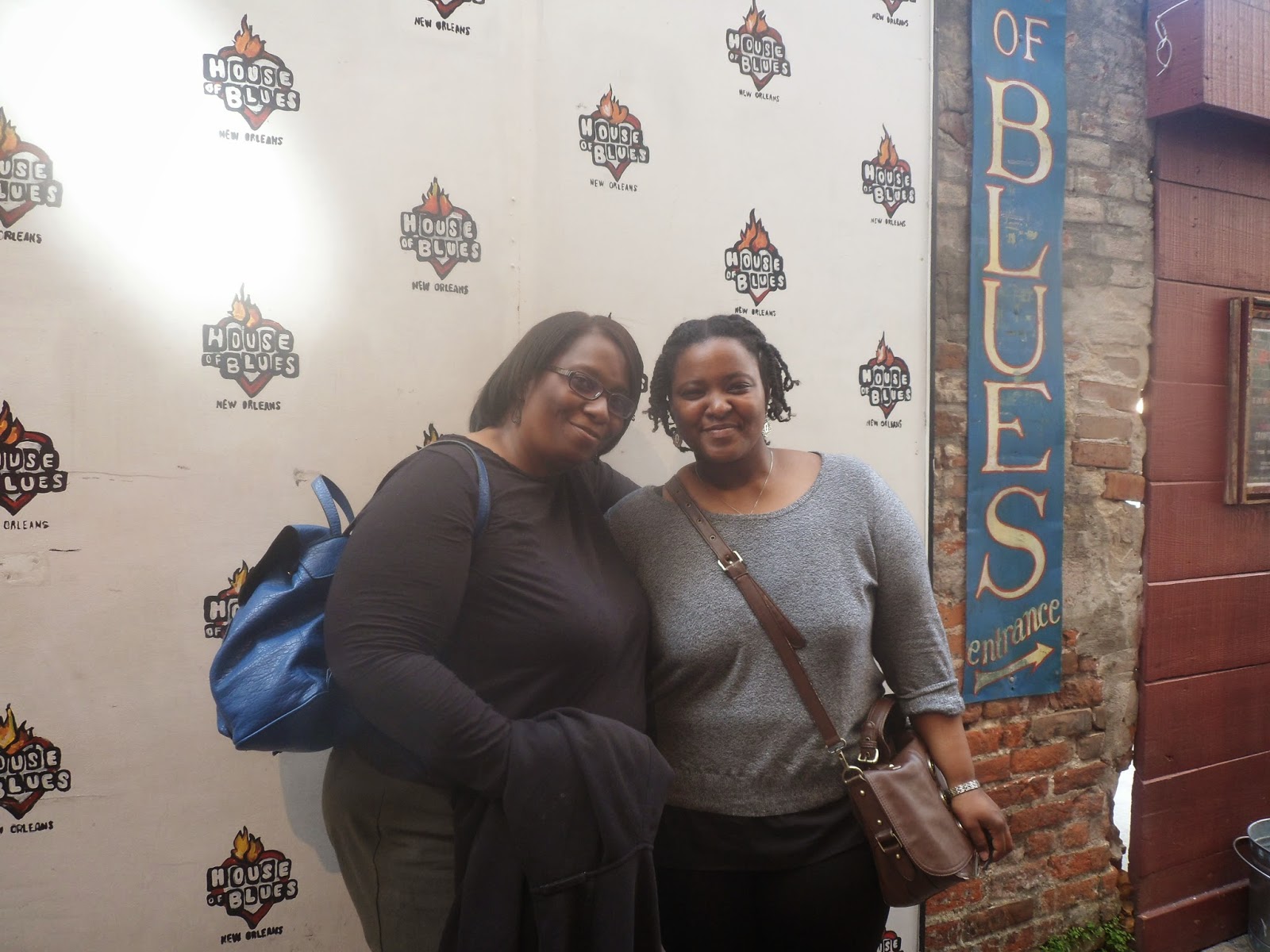 The buffet had pretty standard brunch fair. Unfortunately, thanks to my dulled appetite I could only manage one plate (chicken and waffles, jambalaya, strawberries and blackberries), plus two cups of tea and one and a half mimosas. Evangelist Linda Wright and the HOB Praise Team performed gospel music from beginning to end, of which the only Kirk Franklin song they did was "I Smile". Overall, the whole thing was just aight to me. Ms. Wright knows how to hold a crowd with her voice and sense of humor, plus she had plenty of encouraging things to say so the show was decent. But it wasn't worth the $100 (tax included) that we paid to attend. Still, Ma seemed to really enjoy herself and we got to see what the inside of the House of Blues is like, so it was good for something. 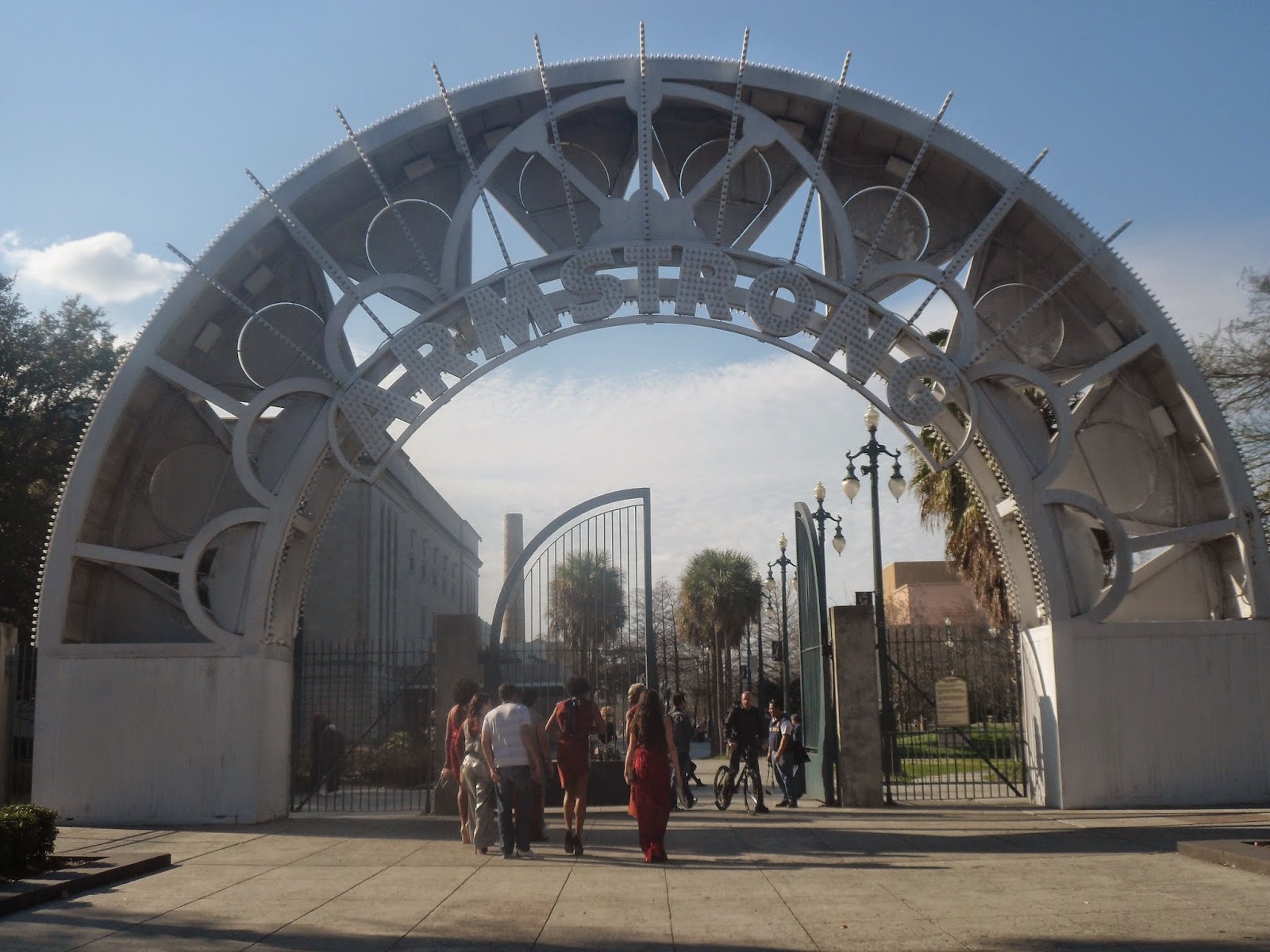 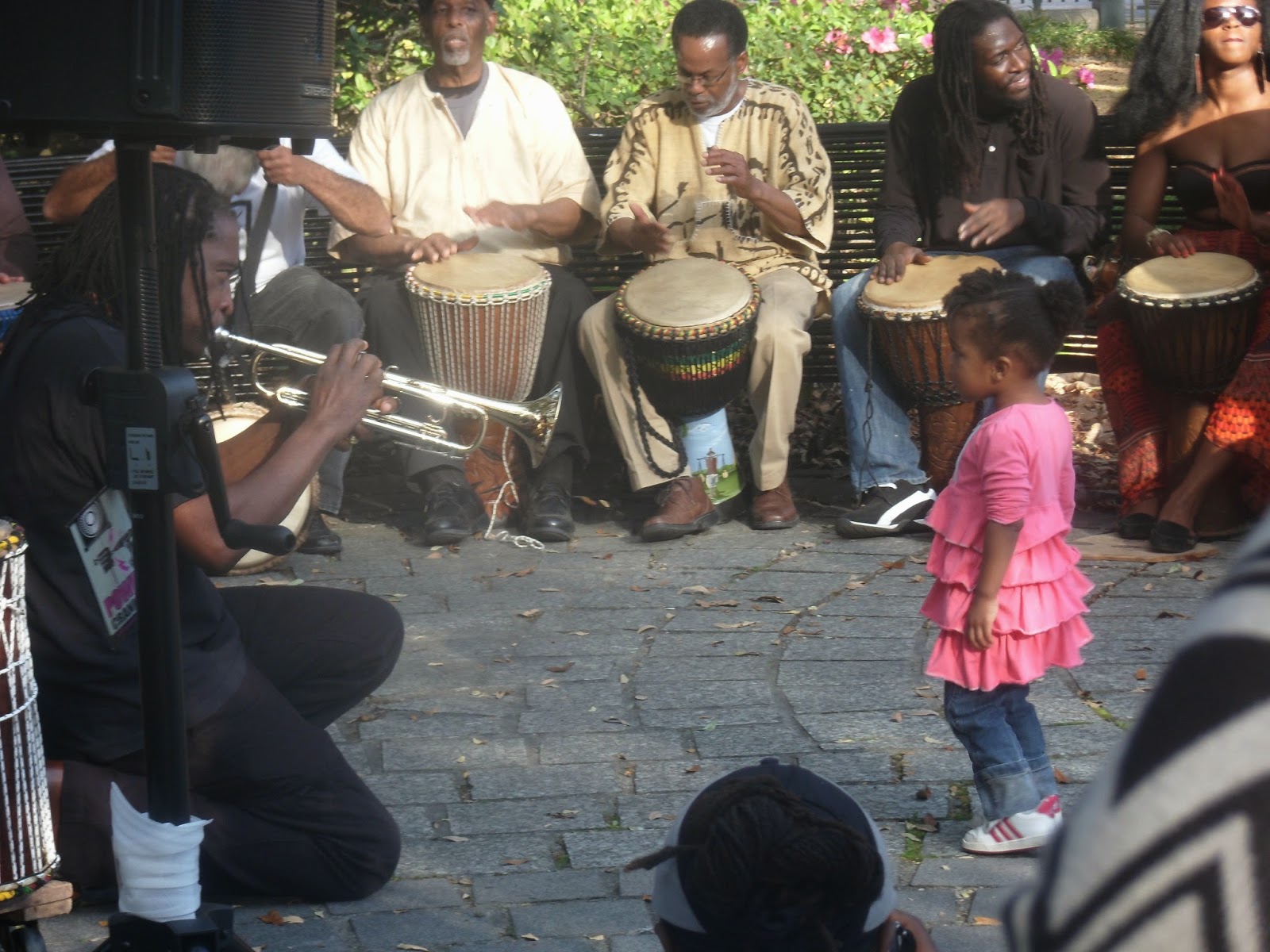 From there, we walked through Woldenberg Park along the Mississipi River, then got a look at Jackson Square in the daylight before walking through it to the Cabildo, where we watched a jazz ensemble play on the street. Then we stopped at the hotel to change into more comfortable clothes and chill for a couple of hours before heading back out to visit Louis Armstrong Park. When we arrived, the Congo Square Preservation Society was doing a drum circle! We'd heard them from across the street before we even saw them. They were  playing music and singing just like our enslaved ancestors used to do every Sunday afternoon in this very spot over 200 years ago. Anyone could join, contributing whatever they had. When we first got there it was just the drummers. But when we walked around the park and came back, they'd switched out drummers and included some people from the crowd. There was also a trumpet player, a guy making bird calls, a dude rapping, and an old man playing his flute on a nearby bench. Even little children were in on the action! It was one of the coolest things I've ever witnessed. Just exquisitely soulful, profoundly beautiful moments full of energy, rhythm, love, and reverence for our roots. The last song they played before we left was actually "Wild Bamboula", and they explained that bamboula means remembering our ancestors. Very fitting seeing as how yesterday was the 50th anniversary of the civil rights march/Bloody Sunday in Selma. 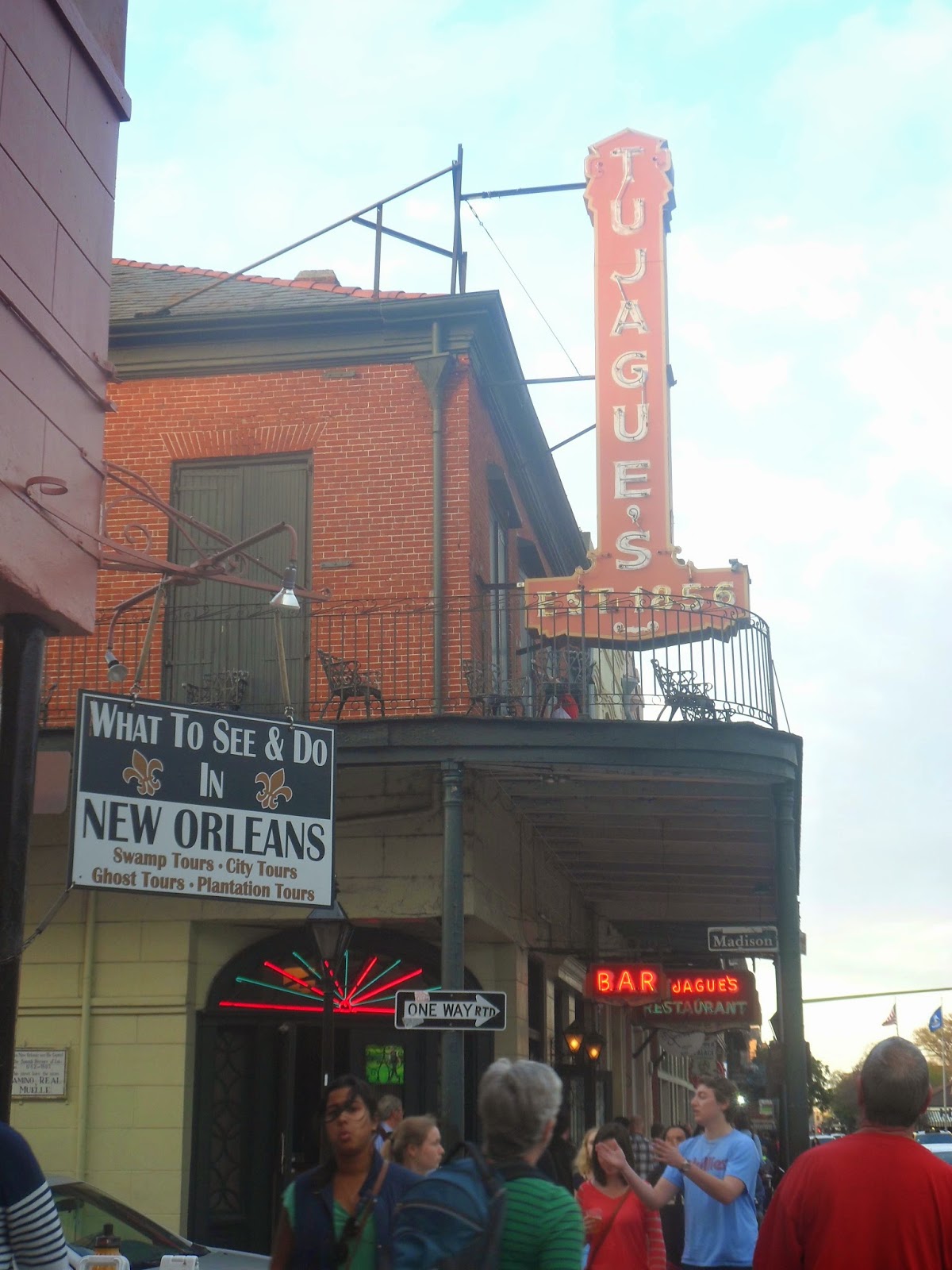 From the park we walked back to the hotel for a potty break and stepped out once again for dinner. Per the woman at Maison Bourbon's recommendation, we went to Tujague's, the self-proclaimed 2nd oldest restaurant in New Orleans that's been serving traditional French Creole food since 1856. Since it's a highly-respected establishment you should probably dress accordingly, but they don't make a fuss if you aren't. The staff are dressed in crisp black and white uniforms to match the decor inside, but they were incredibly courteous to us and others who walked in with jeans and tennis shoes. We didn't even have a reservation, but when we walked in they seated us right away. It probably didn't hurt that we got there early in the evening before the dinner rush. 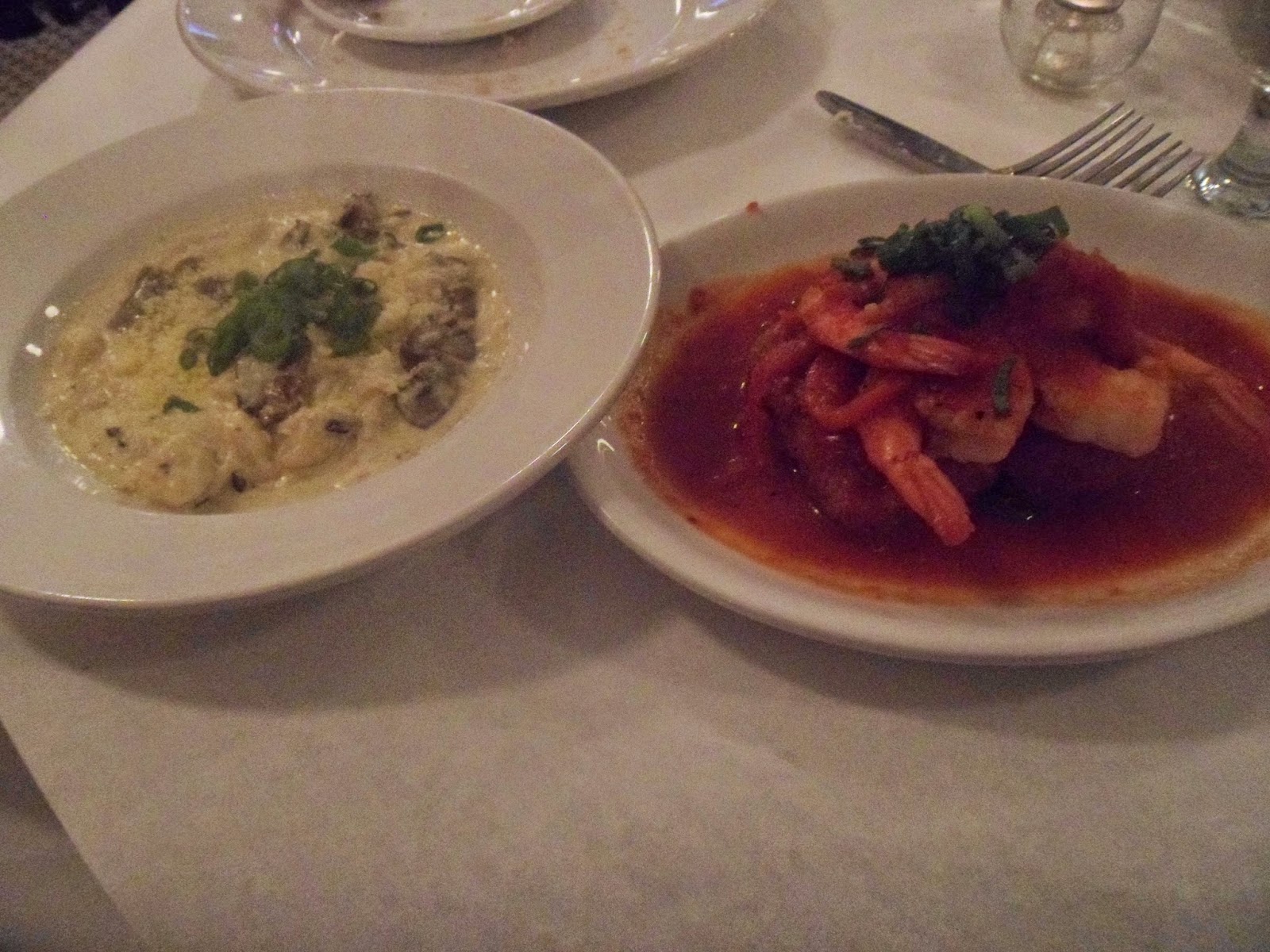 Ma had brisket, while I had two appetizers: shrimp creole, and Louisiana lump crab and wild mushroom gnocchi. Both were absolutely superb. Since arriving yesterday I was wowed right away by music, but I was waiting to be wowed by food, and Tujague's was the one to finally do it! We had such a great dining experience that I really wished I would've dressed up for the occasion.


From there we stopped at Rouse's Market to buy some oranges and throat lozenges, then returned to the hotel for the last time today. Still sick, but mighty satisfied.