Monday was my day off, so I decided to go to the movies by myself, watch two films back-to-back, and have myself a good cry. Luckily for me I picked two great films to cry through.


Unseen footage, unheard songs, over 100 interviews, and other material were used to produce this documentary detailing the life, rise to stardom, and untimely death of Amy Winehouse. The English soul/R&B/jazz singer-songwriter had a distinctive voice, showcased an edgy and honest writing style, and amassed her share of love from fans and ridicule from media during her career. She released two albums before falling victim to addiction on July 23, 2011 at age 27. This film attempts to tell her story "in her own words". 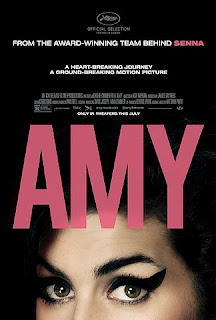 What I really like about this film: Though people have already voiced their issues with the story that this documentary tells, I lovelovelove the way this story is told. The emphasis is almost completely on documentary materials: photos, video footage and audio recordings, magazine and newspaper clippings, scans of pages from Amy's song/poetry/lyric books in her own handwriting. Commentary from various people who were part of Amy's life serves as narration, but we don't see them as they're being interviewed; we only hear their voices. Really the only footage specially shot for the film are aerial and panning shots that were done using drones. Rather than on all the people who have so much to say about this woman, the focus is on Amy and the story that's being portrayed about her. And I just found that to be magnificent. I haven't seen many documentaries in my life so I'm no expert, but this one is definitely high on my list of favorites.

Aside from her problems with addiction, what I got most out of the story is that Amy Winehouse was an artist's artist; and despite how famous she got, fame was never the goal. She just wanted to make music that was real and meant something to her, and the stuff of her life made up most of her material. "Some Unholy War", "You Know I'm No Good", "Love is a Losing Game", "Rehab", "Tears Dry on Their Own", etc. We get the play-by-play on the events that inspired all of those songs and more. And that affected me deeply. When they went into the background behind "Back to Black", showed her recording the song, and then played the actual mixed and mastered record that I've heard time and time again, I cried like a baby. And then at the end when they showed EMS carrying her body out of her apartment and loading her into the back of a truck, and then cut to a bunch of shots and clips from the beginning of the film that show young bright-eyed Amy all hopeful and hardworking and drug free, I wept. I couldn't not weep. As a casual fan I'd known that Amy Winehouse was different, but this film made me realize just how special and vulnerable of a person she was. We lost someone truly, incredibly, devastatingly special, and that's quite a beautiful and heartbreaking thing to have to acknowledge.

What I don't like about this film: As much as the documentary talks about Amy as an artist, I wished it would've focused even more on her artistry and impact than it did. Like how unique her voice and jazz inclinations were at a time where almost no young chart-topping woman was singing jazz or anything akin to it. Or how she was one of the artists who opened the door for British soul and R&B singers in the American and world markets during the 2000s. Before Adele, before Daley, before Sam Smith, before Emeli Sande, before Lianne La Havas, before Jessie J, before any of them hit it big, there was Amy Winehouse. And that's a huge deal. Like, she accomplished so much, and left such a huge mark, in so little time. And she only released two albums! I understand that the documentary is creating a narrative about someone who has passed away, which means it would make sense to acknowledge this person's death and what led to it. After all, she didn't just disappear into thin air; her choices and the choices of some people closest to her had consequences. I get that, so I appreciate the ins and outs that we learn about her addiction problems. I'm just saying that for as wonderful as the film is, I fear that it sells her short.

Would I recommend it?: Yes. If you care about real music or real artists at all, watch this film. You shan't regret it.

Seen Monday July 13th: Inside Out


After having lived in Minnesota all her life, 11-year-old Riley has an extremely difficult time adjusting when her family moves to San Francisco. But she is not alone! A team of emotions (Joy, Anger, Sadness, Fear, and Disgust) live in her brain and work around the clock to manage her feelings and memories and keep her stable. But when Joy and Sadness get separated from headquarters and Riley continues to feel cut off from all that she knows, will it prove to be too much for her?

"Meet the little voices inside your head." 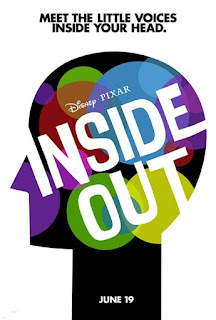 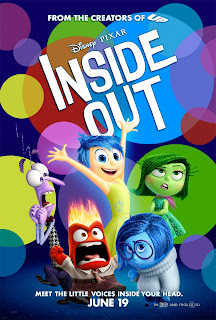 What I really like about this film: I can't not give props to Pixar for creating a work of art with such an original concept, but what really sold me one this film was the message. For the most part people always try to be happy because they want to or they feel like they have to be, and in the process they try to ignore their sadness. But sadness is necessary too! Because if you don't recognize and express the sadness you're feeling, then even the people closest too you won't be perceptive of it, and then they won't be able to help you because they don't know what's going on. In other words, sadness, when not bottled up or hidden away, can bring you some of the happiest moments in life because expressing it allows people to comfort you, encourage you, and help you to move forward. Amen, Inside Out. Amen.

What I don't like about this film: This is pretty heavy for a children's film. Riley is not only moving to an unfamiliar place and leaving her old life behind, but she's also a pre-teen, meaning all around there are transitions and new emotions she has to learn how to process as she enters young adulthood. Obviously this is a story worth telling that is relatable to so many young (and young at heart) people. But it has quite a few moments where it gets deep. And dark. And just... heavy. Plus with all the neurological and psychological vocabulary, at times I felt the film would be more appropriate for a middle school, high school, or even first-year undergrad psychology course than for young children. I'm 22, and some of it even went over my head.

I was also confused about the structure and rules of the world within Riley's brain. If Joy is responsible for keeping Riley happy, but then Joy has a moment when she gets upset and cries, is Joy still Joy? And if Sadness is able to sit next to another figment of Riley's brain and comfort him without making him feel worse about the situation, is she still Sadness? Speaking of Sadness, I wasn't sure what to make of her character at first. From the beginning she's the bumbling, moapy, often unmotivated member of the team who's always forgetting (or choosing not to follow) instructions, but she gets in the way so often and makes so many mistakes during the first half of the film that it makes one wonder if she's trying to sabotage the team or not. Luckily she ends up being an invaluable part of the mission to get Riley re-stabilized, but I don't like how ambiguous her character seems to be at first. And lastly, speaking of good guys, there's no villain in this story. Not one. All the characters are, ostensibly, good. A children's film, a Disney/Pixar movie at that, with no "bad guy"? How can this be?? Of course this is noteworthy because it's something different. But it's also... odd. Perhaps the villain in the film is all the stress and negativity that's causing Riley to shut down and not act like herself. She goes through so much crap emotionally that maybe pinpointing a villain would've just been excessive.

Would I recommend it?: Absolutely! This film is a wonderful reminder that everyone needs help from time to time.You just have to be willing to express how you feel.
Posted by Deela (Danielle G.) at 4:33 PM