I went to the movies with Ivy tonight, and seeing as how this is my first time going out and doing something fun in weeks, I've decided to merge "Outings" and "Infrequent Filmgoer" in this post. Yay for mashups!


Based on the Marvel comic series of the same name and set in the futuristic, fictional-but-totally-wish-it-existed city of San Fransokyo, Big Hero 6 is all about 13-year-old genius Hiro Hamada. His older brother Tadashi encourages him to put his brain power to good use, creating something innovative that could change the world. Hiro starts to follow his brother's lead in attending the same university as him, but when Tadashi dies in a fire, Hiro becomes lost and despondent. Hiro relies on a huggable robotic nurse named Baymax (Tadashi's life's work) and Tadashi's five colleagues/friends to  catch the man who was responsible, and to unleash Hiro's potential both as a tech guy and a human being. 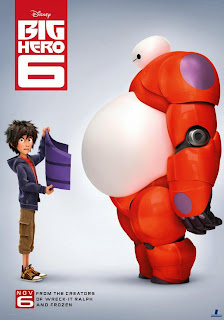 What I really like about this movie: San Francisco + Tokyo = San Fransokyo = PERFECTION! Having been to both San Fran and a few cities in Japan, I have a fondness for both places. Not only is San Fransokyo a brilliantly clever idea, it is also perfectly executed via the animation. Such attention to detail, such a beautifully designed mixture of Japanese and American elements,  from architecture to emblems to scenery, even to language displayed on buildings and on everyday items... Just perfect. Some scenes even made me gasp. The view of the city from the top of Golden Gate Bridge? The portal sequence? Mind.blowing. Big Hero 6 is unlike any Disney or animated film I've ever seen, just based on the artistic concept and precision of the animation alone. The film also has a variety of themes: science and tech, death, mourning, ethics of robotics, intellectual property rights, revenge,  friendship, teamwork, self-sacrifice. Somehow it all fits together on screen.

What I don't like about this movie: Ivy brought this up as we watched the credits roll, and I agree with her. Other than Hiro, Tadashi, and the villain, there's hardly any character development. All we know about the other characters is their names, personalities, particular scientific interests, and how they function in relation to Hiro. That's about it; we know very little about them as people. Plus there were a couple holes and unanswered questions in the plot, but with some of that I guess you just have to suspend reality and play along. After all, this is a Disney comedy-drama about superheroes that's meant for kids, not an intense sci-fi flick.

Would I recommend it?: Absolutely!If I weren't such a cheapskate I'd probably pay to see it again!
Posted by Deela (Danielle G.) at 11:30 PM