In my Japanese class, we've transitioned from going through a textbook to using "authentic materials." I've basically been reading essays, articles, and short stories and watching videos for the past month. Each video carries a theme having to do with humans' relationship with the environment and concerns about maintaining or improving a way of life. The following are the first 3 videos, and the only cartoons, that I've watched. I wanted to tell y'all about them before the program ends and I forget what they're about, so here goes.
サザエさん (Sazae-san)
Episode: 波平もったいない論 (Namihei mottainai ron/ "Namihei's discussion about waste") 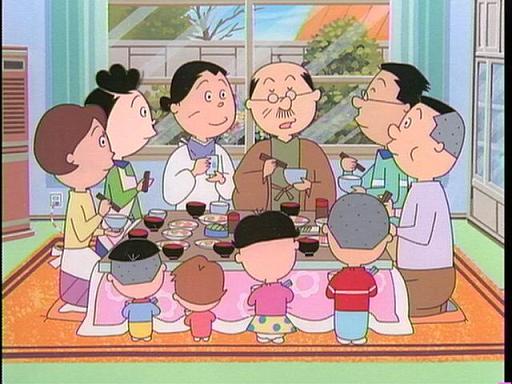 'Sazae-san' is the longest-airing anime series, having first aired in 1969. This episode focuses on the concept of "mottainai" (waste/wasteful actions). As the head of the household, Namihei challenges his family to be more mindful and actively reduce their wasteful habits and consumption. A couple amusing shenanigans ensue, and in the end the family agrees that the greatest waste is when people don't get along.
おーい出てこーい (Ooi, detekooi / Hey, come out of there!) 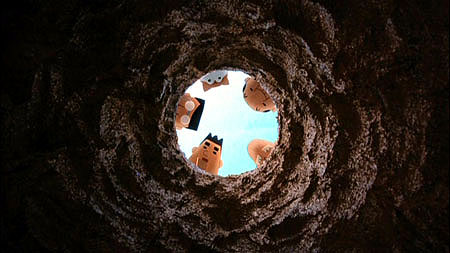 'Ooi' is based on a short story written by Hoshi Shin'ichi, one of Japan's most influential science fiction writers. This short animated piece makes a statement about waste and using space efficiently as well, but does so in a creepy way. After a storm, a shrine is blown over, revealing a large hole. Villagers gather around this hole, with one yelling "Ooi, detekooi" and throwing a rock into it to see how deep it is. Media, police, and scientists gather around to investigate the hole, which appears to be bottomless. At this discovery, a sleazy racketeer buys the rights to the hole and accepts money from individuals, groups, organizations, businesses and even government agencies to allow them to dump their trash into this whole. Garbage, human waste, nuclear waste, money, weapons, you name it. The village makes tons of money off of this operation and transforms into a bustling metropolis.
One day, the sound of "Ooi, detekooi" falls out of the sky, followed by a rock...
The lesson is that what we do will come back to us, and the effects of our actions on the environment last longer than we think.
﻿
生活維持省 (seikatsuijishou / lit. Department for the Preservation of Livelihood) 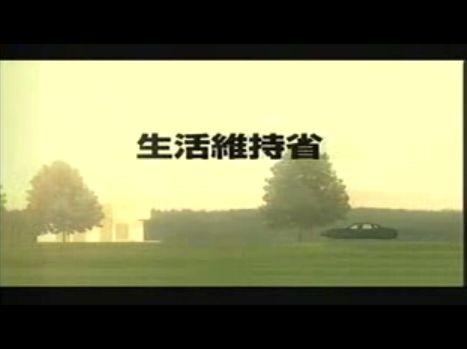 'Seikatsu' is also based on a short story written by Hoshi Shin'ichi. Unlike the previous two videos, this one focuses on overpopulation and population control.

In the future, two men working for the Department for the Preservation of Livelihood ride around in their hovercraft. They arrive at a woman's house and explain to her the consequences of overpopulation that arose in the past: overcrowding, shortage of resources, fight for survival, and eventually war on a global scale. In order to keep the population at a sustainable level, a system was created in which a computer randomly selects people to die. The woman's daughter has been selected. The two agents find the little girl, shoot her, then hit the road.

At the end of the short, one of the agents reveals that he's been chosen to die next.

Like 'Ooi', this story also pushes the idea that what you do comes back to you. In addition to that, 'Seikatsu' demonstrates that in order to create or maintain a certain lifestyle sacrifices have to be made, but sacrificing things or people cannot be taken lightly.

Sorry, I know that these stories got progressively dark and heavy, but I found them all to be thought-provoking and clever and wanted to tell y'all about them. These videos are pretty difficult to find on the internet, but if you have the chance to watch them please do. They'll give you a lot to think about!
Posted by Deela (Danielle G.) at 10:36 AM